Insurer coaches the newly covered through the health system 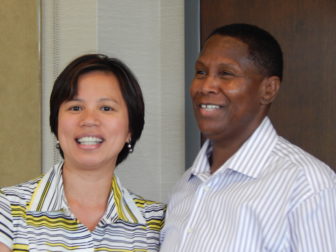 This is the third story in an occasional series on major issues shaping health care in the wake of the Affordable Care Act. Read the previous stories by clicking here and here.

Patricia Watkins got out of the hospital last December with a new diagnosis and a lot of fear.

Although Watkins had had insurance for nearly a year – she bought it through the marketplace created by the federal health law – she had been getting her care at a walk-in clinic, just as she did when she was uninsured. She’d have preferred to have a set primary care doctor, but didn’t know how to search for one.

The prospect of handling a new heart failure diagnosis was even more daunting.

So Watkins called her insurance company, ConnectiCare, and ended up in touch with Maria Christine Binalla, a nurse care manager who helped guide Watkins through the health care system. At first, they talked on the phone every day. Binalla helped Watkins find a primary care doctor and address medication issues, conference calling her and a pharmacist. They addressed issues outside of the medical system that mattered to her health, like finding a dietician at Shop Rite who could help Watkins find healthier foods, and balancing the work of managing Watkins’ medical conditions with the long hours she worked at her security job.

“She actually walked with me step by step, so it was all great,” Watkins said. “I was relying on her.”

For the Farmington-based insurer, it was one of hundreds of individual efforts aimed at helping those newly covered under Obamacare navigate the health care system and address barriers to taking care of their health. The assistance ranges from making primary-care appointments for customers who haven’t yet incurred claims to linking customers in need to community programs that help with energy bills or provide rides to medical appointments.

Surveys of people who gained insurance under the federal health law indicate that close to 90 percent want more information on how to use their coverage, said Sophie Stern, deputy director of the Best Practices Institute at Enroll America, a group focused on ensuring that people get and stay covered.

“Overwhelmingly they said they want to hear from the health insurance company,” Stern said.

The insurers selling plans through Connecticut’s exchange, Access Health CT, are using a variety of techniques to help customers new to insurance and to encourage new members to see a primary care provider. A survey of exchange customers earlier this year indicated that 28 percent did not have a primary care doctor, and 36 percent hadn’t yet used their coverage.

UnitedHealthcare has called new members, for example, to see if they have questions.

HealthyCT has been emphasizing the importance of wellness and selecting a primary care physician through its newsletter and an online health and wellness platform that has tools including weight trackers. It also allows members to communicate with nutritionists or trainers. The company hopes to do more targeted messaging to individual customers later this year or next year, said Karen Clarke, HealthyCT’s vice president for external affairs.

Anthem Blue Cross and Blue Shield has focused on expanding online options – including a mobile app – to help member find a provider or determine what they would have to pay for care, based on research suggesting that two-thirds of customers prefer to get information online, Director of Sales Paul Bartosic said.

Anthem also has a program that uses member health data, such as medical and pharmacy claims, and notifies them with suggestions if it identifies gaps in care. It also notifies a patient’s doctor if it identifies that the person hasn’t refilled a prescription regularly or is overdue for a test.

ConnectiCare, which covers more exchange customers than any other Connecticut insurer, has been reaching out to members who, according to medical claims (or a lack of them), haven’t visited a primary care provider. Those members might get mailings or a phone call from one of the company’s care managers. Sometimes, while speaking to a customer, they’ll conference-call a doctor’s office to schedule a visit.

“You don’t want to leave it on somebody, because they may not call,” said Kim Green, a nurse and senior care manager at ConnectiCare.

The company began the effort for those who bought plans on the exchange, but has since expanded it to other individual-market customers. It says that strategy has helped about 1,000 people find a primary care provider so far this year.

Those calls reflect, in part, an attempt to adapt to the needs of new insurance customers. In the past, aside from Medicare plans, ConnectiCare focused largely on employer-sponsored coverage, insuring people who had access to human resources departments to help with coverage issues and experience with insurance.

People buying their own health plans don’t usually have that kind of support. And it wasn’t entirely clear who would be signing up under Obamacare.

“We didn’t know what to expect,” Green said.

A few weeks into the health law’s coverage rollout, it was clear that many members needed a lot of help navigating the health care system. “Every call was pretty long,” Green said.

“It’s more of a holistic view. It’s gone beyond, ‘These are the benefits that you have,’ and the assumption that just because you have insurance, you’ll know how to use it and you’ll take advantage of those benefits.”
Michelle Zettergren

She and her colleagues explained the online provider directories and list of covered drugs. For customers without Internet access, they mailed copies or gave out phone numbers for doctors.

Some faced language barriers that made finding a provider or making an appointment difficult. Some worried whether they could afford care. Some were afraid of what they’d learn about their health if they saw a doctor.

Some new customers faced barriers to getting care that Green described as “social work needs.”

The company assembled a team to compile and regularly update a list of community resources, such as faith-based organizations that provide free rides. Its community outreach team holds events in various communities, often partnered with libraries or church groups, to answer questions about coverage.

“It’s more of a holistic view,” said Michelle Zettergren, ConnectiCare’s senior vice president and chief sales and marketing officer. “It’s gone beyond, ‘These are the benefits that you have,’ and the assumption that just because you have insurance, you’ll know how to use it and you’ll take advantage of those benefits. It’s really kind of understanding the holistic picture of what’s going on in that person’s life.”

What’s the business case for an insurance company to do that?

“Everyone assumes that the insurance companies are happy when you don’t go for care,” Zettergren said. “And the reality is, we want folks to be going for care on an ongoing basis within the right setting, with the right individuals. We want them to have ownership of their health care.” 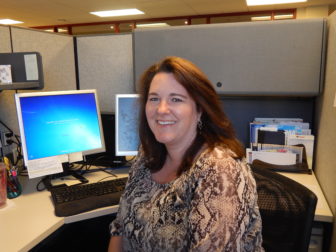 Kim Green, a senior care manager at ConnectiCare, spends most of her days on the phone with customers.

“Somebody not seeing a doctor for 15 years is a really bad thing for everyone,” she said. “It elevates the issues that they have, and you’re now looking, when they finally do enter into the system, [at] a much more costly experience versus if you’re addressing these things up front.”

A guide through the health care system

For Watkins, getting the right care required addressing barriers that having an insurance card alone wasn’t going to fix.

She had to fit managing her medical condition into a heavy work schedule with unpredictable shifts.

“It was very challenging,” she said.

Among other things, that meant finding time to take her blood pressure regularly. Once, during the winter, she called Binalla from an outdoor work site, wearing three layers of clothes. Binalla asked if she was going to check her blood pressure. “I’m not sure, I’m too bundled up!” Watkins answered.

She had to overcome some bad habits she’d developed. In recent years, she’d been working more than 70 hours many weeks and getting little sleep. She’d buy cheap sandwiches and energy drinks. “It all just caught up with me,” she said.

Then there was navigating the medical system.

The hospital referred Watkins to a walk-in clinic. Watkins continued going to the walk-in at first. But the on-call doctors changed frequently, making it difficult to address questions that came up with one doctor’s plan if another was on.

Binalla suggested that it might be better to have a relationship with a set doctor, and helped Watkins find one in the insurer’s network. She suggested asking the primary care doctor for recommendations for a cardiologist, which Watkins did.

“It’s good to have that one relationship and someone that’s going to be able to know me personally,” Watkins said. “It works out better.”

At first, she was hesitant to discuss her concerns with health care providers, worried they wouldn’t understand. She asked Binalla if she could be on the phone during one of her appointments, so Binalla could convey her questions.

She signed a form so Binalla could communicate with her doctors and get faxed copies of her medical records. “I was relying on Christine,” she said.

“Once the doctor told me, ‘You’re looking great, I think you’re going to be ok,’ the phone calls slacked up a little bit.”
Patricia Watkins

They spoke daily for at least 20 or 30 minutes at first. Gradually, she became more comfortable handling her care, and called Binalla less frequently.

“Once the doctor told me, ‘You’re looking great, I think you’re going to be ok,’ the phone calls slacked up a little bit,” Watkins said.

She takes better care of herself, working closer to 40 to 50 hours per week, getting more sleep and maintaining a low-sodium diet.

And Binalla said Watkins now handles the health care system on her own. She’ll call a doctor if the office didn’t call her back as expected. Where Watkins once wondered if she should discuss something with a doctor, now she does it with ease, Binalla said.

“She advocates for herself confidently,” Binalla said.

by Lauren Weber and Laura Ungar and Michelle R. Smith, The Associated Press and Hannah Recht and Anna Maria Barry-Jester

On every level, this investigation found, the system is underfunded and under threat, unable to protect the nation’s health.

Getting workforce back to full strength will require faster, easier, and better COVID-19 tests

Healthcare leaders say widespread and frequent testing will be essential for Connecticut to keep the economy chugging along.