As expected, the standardized test scores parents are accustomed to seeing for their child’s school have plunged as the state implements a harder test aligned with the controversial Common Core State Standards.

In English, 55 percent of students were judged proficient last year — down from 81 percent in reading and 84 percent in writing in 2013. 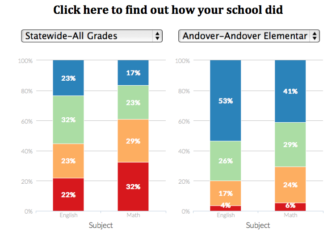 State education officials weren’t surprised. They have been warning the drop would happen, as it has in other states that switched to exams aligned with the Common Core.

“These results do not mean that our students are learning less, rather it reflects that we raised the bar,” State Education Commissioner Dianna Wentzell said Friday. “These scores met our expectations. However, we have room to grow and more to do.”

Gov. Dannel P. Malloy, whose administration has come under fire from the state’s teachers’ unions for the rollout of the new academic standards and tests, reaffirmed his commitment to the shift Friday.

“We have a crisis in education in America, and it’s because for too long, expectations were too low. Now, we have a laser-focus on preparing children with the skills they need for college and beyond… Thats’ why we’re at this important transition point, and that’s why we’ve set this new baseline upon which to measure ourselves,” the Democratic governor said Friday.

The number of students electing not to take the state exams also rose last school year — a trend referred to as the “opt-out movement.” Concern has grown among parents that their children are spending too much time in school being tested or being prepared for tests.

Statewide, 4 percent of eligible students did not take the exams last school year — up from less than 1 percent in 2013.

The federal government has warned that states and school districts could loose funding if participation in individual districts and schools falls bellow 95 percent. 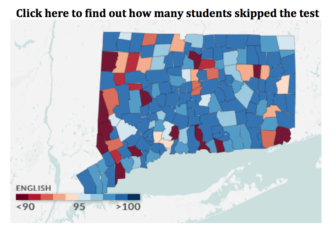 “It is the responsibility of states to ensure that all students are assessed annually because it gives educators and parents an idea of how the student is doing and ensures that schools are paying attention to traditionally underserved populations,” U.S. Department of Education Spokesman Dorie Nolt said Thursday.

Statewide, one out of every seven schools did not test 95 percent of their students and one out of every 12 schools had less than 90 percent participation, according to preliminary data released Friday.

The data showed 132 schools did not have 95 percent participation among eligible students for the English exam, and 144 schools did not meet the threshold for the math exam.

It is unclear what will happen to these schools.

“The [U.S. Education] Department has not had to withhold money — yet — over this requirement because states have either complied or have appropriately addressed the issue with schools or districts that assessed less than 95 percent of students,” Nolt said.

The New York Times last week reported that New York education officials have been told that federal funding would not be withheld, but Nolt said Thursday that no decision has been made for Connecticut or other states.

On Friday, Wentzell, the state’s education chief, was vague in describing how the state plans to address low participation rates in Connecticut’s schools, and whether funding is in jeopardy.

“We are going to work with our districts to ensure that we have similar levels of participation,” she said. “When the final analysis is done, I believe, it will be a handful, literally, of cases. We may need to issue more severe corrective actions.”

State officials say that, among other things, the testing is an importance civil rights issue. 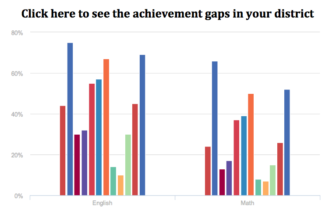 “There’s nothing more fair than honest information about achievement. We can’t deliver on the most important aspect of equity and the civil right of good public education if we don’t know where every kid in the state stands with regard to having had access and the ability to achieve,” said Wentzell.

As more parents last school year promised to keep their children from being tested national civil rights groups pointed to how important standardized tests are in highlighting disparities in achievement between minority students and their classmates.

State data does not show major disparities in which groups of students were skipping the test. Participation rates hovered around 96 percent for each group of students.

What is the test used for?

State officials plan to use the test scores to identify the state’s lowest-performing schools. In recent years, as additional state funding for education became available, these schools and districts received almost all of that added funding.

“And we need to keep it up,” Wentzell told reporters Friday.

Test results will also account for nearly one-quarter of teachers’ evaluation in two school years. Teachers will be graded on student progress on the exams from year-to-year.

Sheila Cohen, the president of the state’s largest teachers’ union, said the state should not be basing decisions on the results of these exams.

“Teachers do not think the new statewide SBAC results are an accurate reflection of what Connecticut students know and are able to do. All indications are that SBAC is not only unfair and invalid, but is also a failed experiment,” she said.

“SBAC is neither meaningful in making critical judgments about student, school and teacher performance, nor is it an accurate gauge by which decisions about individualized student instruction, programs, and funding should be determined,” Cohen said.

Parents and state officials will not be able to readily compare Connecticut’s results to those in other states that took the Smarter Balanced Assessments because officials from most of those states objected to having a central database for comparison purposes.

Wentzell said she supports putting a system in place so nationwide comparisons can be made.

“Some states didn’t want that head-to-head comparison, she said. “We are not as worried about that comparison.”