Court warned of ‘life and death’ stakes in domestic cases 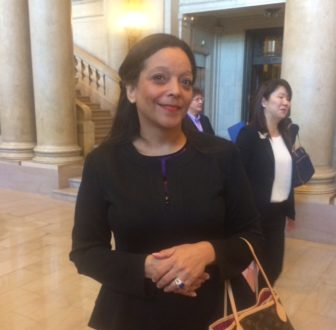 The Connecticut Supreme Court heard an expedited public-interest appeal Tuesday intended to clarify whether applications for restraining orders in family-violence cases ever can be denied without a hearing.

“This isn’t a technicality,” Linda Allard of Greater Hartford Legal Aid told the court. “This is about life and death.”

Wendy V., as she is identified in court papers, filed applications on June 8 and June 19 for a restraining order against her former boyfriend, whom she says threatened to kill her if she prevails in a custody fight over their child. Each time, Superior Court Jorge Simon rejected both applications on the same day without a hearing.

Allard called Wendy V. “a perfect surrogate” for the women who go to court without representation in domestic violence cases, unsure of the process, and fail to clearly articulate a legal basis for a restraining order.

Justice Richard N. Palmer asked if denial without a hearing was appropriate when, “even on the basis of the application, relief is not warranted?”

Allard replied that a hearing was mandatory under the law.

The case is being closely followed by the Connecticut Coalition Against Domestic Violence, which is hoping that the high court quickly gives clear direction that hearings are mandatory.

Hearings are necessary to draw out the information on which a judge should decided if a restraining order is warranted, said Karen Jarmoc, executive director of the coalition.

“I think there is enough of a narrative here around why it’s so important for a victim of domestic violence, when applying for an order, to be able to have a hearing,” Jarmoc said. “There is information that can be gleaned from a hearing. It’s that back and forth between a judge and an applicant that can be really meaningful and provide information that is not on the application.”

Connecticut courts receive 9,000 requests for temporary restraining orders annually, approving about half, Jarmoc said. About 3,500 of the applications eventually result in a permanent restraining order. No statistics are kept on how many are denied without hearings.

Under pressure from the Supreme Court, Simon eventually conducted a hearing on Wendy V.’s application. He declined to issue a restraining order, a decision now under appeal to the Appellate Court.

Allard said the broader procedural issue before the Supreme Court was not moot, saying the situation was likely to re-occur without clear guidance from the court.

“Victims of domestic violence should not go to court and be turned away at the door,” Allard said.

The court’s hearing Tuesday was unusual in that Allard faced no competing counsel, as she was arguing for a clarification of court procedure as a matter of public interest.

Allard said after the hearing the Supreme Court takes only a handful of cases as public-interest appeals every year.

“It’s very significant they took this case,” she said.

At the court’s invitation, the Family Law Section of the Connecticut Bar Association filed an amicus brief supporting the legal aid appeal.