“Consumers would rather go to the gym or pay taxes than shop for health insurance,” said Lynn Quincy, director of the Health Care Value Hub at Consumers Union.

In focus groups, even those with the knowledge to pick the best plan often had little confidence in their choice, worried that health plans contained tricks or traps they didn’t catch, she said. 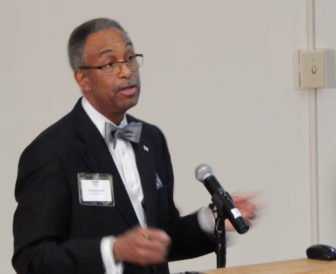 That’s not just a problem for the millions of people trying to renew their health plans or pick new ones. It’s a problem for policymakers trying to improve the health of the population and ensure that the expansion of health care coverage under the federal health law does more than give a lot of people new insurance cards, experts said Tuesday at a symposium on health insurance literacy hosted by the Health Disparities Institute at UConn Health.

“Health insurance is not an outcome in and of itself,” said Sanford Cloud Jr., chairman of the board of the Connecticut Health Foundation, which sponsored the event. “Rather, health insurance is a tool that opens the doors to care.”

And if people pick a plan that’s not suitable for them – if they go for the option with the lowest monthly premium but a deductible that requires them to pay thousands of dollars if they get sick, or if they don’t know how to use their coverage to get preventive care or find out if a service is covered – they’re more likely to end up with huge unexpected bills, use the wrong types of care or avoid care altogether – potentially leading to poor health, worse outcomes and higher costs.

Much of the symposium focused on the need to improve health insurance literacy – people’s capacity to find and evaluate health plans, select the best one for their circumstances, and use it. It’s key to ensuring that people can get the preventive care they need and effectively manage chronic conditions, and to reducing racial and ethnic health disparities, speakers said. 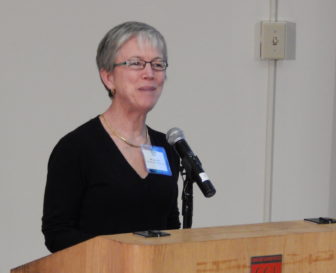 But some, including Quincy and state Healthcare Advocate Victoria Veltri, pointed to the need to simplify what patients are dealing with – insurance products themselves and the system for picking a provider and getting care – rather than just trying to teach people to navigate an overly complex system.

“Does it have to be this complex?” asked Dr. Victor G. Villagra, the Health Disparities Institute’s associate director and a former CIGNA executive who has written about the need to simplify insurance products.

The challenge is particularly acute among those who gained coverage under the health law – but it is not exclusive to them.

People who bought coverage through the state’s health insurance exchange, Access Health CT, are more likely than others to have been previously uninsured, unemployed or underemployed, Rawlins said. Exchange customers tend to be more diverse, less well-educated and more likely to speak English as a second language. Many lack an understanding of basic insurance terms.

“Unfortunately we’ve seen from claims data that newly insured people are not using their benefits effectively,” he said.

As of mid-2015, 36 percent of Access Health customers surveyed hadn’t used their coverage, and 28 percent didn’t have a primary care physician. The rates were far higher among African-Americans and Hispanics.

But Quincy noted that even most people who have long been covered don’t know how insurance works unless they’ve had a serious illness.

“I’ve been insured my whole life. Until I got breast cancer, I didn’t know what my out-of-pocket maximum was,” she said, referring to the dollar limit on what insurance customers must pay for care in a given year.

Taking the bus with chest pains

There’s a story from a consumer focus group that sticks out to Kathryn Paez, principal researcher at American Institutes for Research. A man said he’d been having chest pains, but wasn’t sure if his insurance plan covered ambulance services. So he got on a bus to go to the hospital.

It turned out he was having a heart attack. 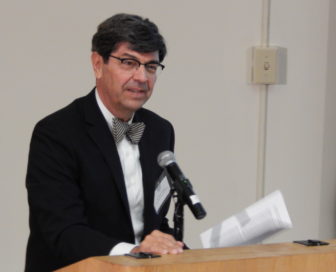 While some people worry about what their plan covers, many tend to be overly confident in their ability to choose and use health insurance, Paez’s organization found after developing a tool to measure health insurance literacy. Most knew basic terms, but many struggled when asked to figure out how much a patient would have to pay in a certain situation or to identify the differences between HMOs and PPOs.

Since most people’s exposure to insurance comes from their automobile coverage, Paez said, many are familiar with premiums. But using that as a frame of reference for health insurance can lead to confusion. Since people pay their full deductible every time they file an auto claim, she noted, some expect to pay the full deductible each time they get medical care.

People who go to the doctor once a year might be confident about how to use the system. But if they have to go to the emergency room, or require surgery, they often realize there’s more to understand than they thought. Perhaps the anesthesiologist was outside their insurer’s network and they have to pay a significantly higher portion of the cost, or they didn’t realize the nuances of their drug coverage until they filled a prescription and were surprised by the cost.

Younger people and those who use fewer health care services tended to be most likely to struggle, as did minorities, people with lower incomes and people with less education, she said.

“If there’s one population to focus on, it’s the millennials. They’re the ones that struggle the most,” Paez said.

Quincy pointed to the challenges people face in trying to choose between plans: Directories that list which providers are covered are often inaccurate. There are usually no shorthand descriptions to indicate if a plan covers a broad network of providers or a narrower group, or whether they’ve been selected based on any quality measures. It’s almost impossible to compare how plans cover various prescription drugs, she said.

So what can be done?

Quincy suggested the need for “cognitive shortcuts” – tools to help people make decisions. One that could help, she said, would allow them to enter information about their health and get an estimate of what each plan would cost in both monthly premiums and out-of-pocket costs for care. (Connecticut’s exchange recently unveiled a tool intended to do that.) 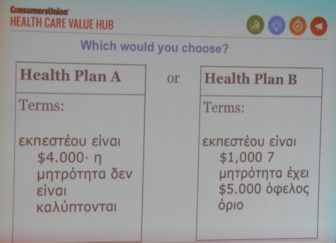 It can also help, she said, to see examples of what care would cost under various plans for specific scenarios, like having a baby or cancer treatment.

Her advice for developing consumer materials: Test them on consumers, and “do not ask them to do math if at all possible.”

And people need basic messages about insurance, Quincy said: Keep paying your premiums to keep your coverage. Find a primary care provider rather than using the ER for routine care.

Paez suggested another one: “Call member services if you have a question.” Only 20 percent of those surveyed said they were very likely to call their insurer to find out what’s covered, even though that’s the best source of information, she said.

Villagra suggested a two-track approach: giving people decision-making tools and in-person help when they need it, and adopting a longer-term focus on simplifying insurance products, for which Connecticut could be well-positioned to take the lead.

“I think here in Connecticut we can tackle it given our built-in expertise and legacy in this industry,” he said.

Many residents who didn’t previously qualify for premium tax credits will be eligible starting in May.