Malloy sends early layoff warning to most of state’s workforce 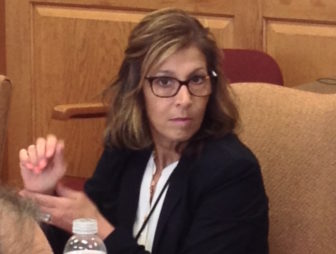 Though Gov. Dannel P. Malloy’s full plan to shrink the state workforce remains unclear, the picture started to come into focus this week.

Specifically, the administration sent a letter to seven unions representing close to 70 percent of the workforce warning they could be affected by new agency organizational plans that “may include reductions in force.”

The letter sent by Office of Labor Relations Undersecretary Lisa Grasso Egan covered most of the unionized state workforce directly under the governor’s authority.

Most of the remaining workforce — involving public colleges and universities, the judicial and legislative branches, and the Division of Criminal Justice — have their own administrative bodies that manage labor issues.

The governor’s budget office “has directed agencies to submit an organizational plan to reduce the scope of programming necessary to operate within the level of resources anticipated for FY (fiscal year) 17,” Grasso Egan wrote in a memo obtained by The Mirror. “We anticipate that there will be labor force impacts resulting from such organizational changes. These may include reductions in force.”

This letter is just the first step in a series of legal requirements before any workers could off the job. Once pink slips are served, there still is a period of time — which varies from union to union — before employment ends. Most involve several months, though some higher education faculty must receive up to one year’s notice.

The unions that received Grasso Egan’s letter were:

Malloy told Capitol reporters and the general public at various events this week that a significant reduction in the workforce is unavoidable given Connecticut’s fiscal challenges. The governor’s new budget relies on eliminating “several thousand” state jobs, according to his budget director, Benjamin Barnes.

But the state has only $406 million in its emergency reserve and nonpartisan analysts are projecting much larger shortfalls of about $900 million in the upcoming fiscal year and topping $2 billion in each of the first two fiscal years after the November state elections.

The State Employees Bargaining Agent Coalition issued a series of statements this week insisting that the governor’s plans would worsen Connecticut’s economy while weakening services that protect the most vulnerable.

“Laying off thousands of state employees not only denies people the essential services they need; it damages Connecticut’s economy,” said Merisa Williams, a secretary at Western Connecticut State University (WCSU) in Danbury. “It leads to more budget shortfalls in the future, continuing a race to the bottom for our state’s quality of life.”

“It’s time to stop with the false assumption that working people are the only ones who should step up to protect and preserve our quality of life,” said AFT Connecticut President Jan Hochadel. “The reality is that Connecticut has a fairness problem. …All working families contribute taxes at nearly twice the rate that that millionaires and billionaires do to fund vital services.”

“There is no reason why we have to have layoffs,” he told reporters Friday. “This is draconian.”

But Fasano said Friday the governor has given no indication he is pursuing concessions – only job cuts – and called for both sides to begin talks.

“It is my understanding that Governor Malloy has not met with the unions to discuss alternatives to layoffs, Fasano added. “… This is not the right thing to do. This is about people’s lives.”

Malloy spokesman Chris McClure responded that, “As the Governor said in his state of the state speech in February, state employees need to be part of the solution to our fiscal challenges. That should include a discussion about benefits. If state employees are ready to open that contract and offer ideas for savings, we welcome that discussion and stand ready to meet them at the bargaining table.

“One area where we disagree with Sen. Fasano – claiming that layoffs can be avoided by opening SEBAC is a false choice. Unless we want to raise taxes, reducing the size of state government is a difficult but necessary part of living within our means.”