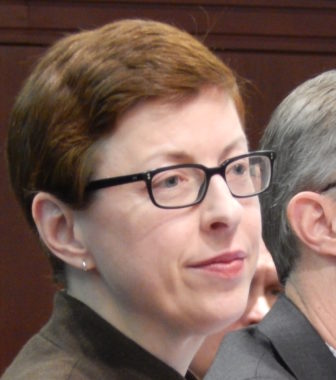 Legislators voted Monday to allow the state to move toward outsourcing case management work in a Medicaid program for people with acquired brain injuries, four months after rejecting a similar proposal.

Officials from the state Department of Social Services told legislators that they had no choice but to seek to contract out the services because the agency’s social workers are unable to adequately handle them. They cited a significant growth in caseloads – in particular, from growth in protective services for the elderly cases – at a time when a state hiring freeze and budget challenges have made the department unable to hire more social workers.

“The status quo is not an available alternative because we are not serving people in the manner that we are obligated to do,” McEvoy said.

And a state employee union representative urged legislators to reject the proposal and instead hire enough state employees to handle the work.

But others submitted testimony saying the service from DSS social workers had declined in recent years as their caseloads had increased, and that contracting out would improve services for clients.

The Human Services Committee voted 14-2 to support the proposal, while the Appropriations Committee approved it 45 to 6. The approval allows the state to seek federal permission to make changes to the program.

The two committees rejected a similar proposal in December, with many members citing concerns about the process behind it. It was the first time legislators had used their authority to effectively veto a state proposal to the federal government since they gained the authority to do so in 2007.

Earlier this year, Gov. Dannel P. Malloy proposed eliminating that authority. But legislators were cool to the idea and removed the language making the change from the larger budget bill that originally contained it.

The state currently operates two Medicaid programs for people with brain injuries, intended to help them live in the community. Both are Medicaid waivers, which allow the state to cover people with specific needs who might not otherwise qualify for the medical assistance program.

The original waiver program serves 454 people, while the second serves 50, with 34 on the waiting list. Although there are open slots in the program, DSS officials have said they need approval of the outsourcing plan to serve more people. Advocates for people with brain injuries have said the two things should not be linked.

DSS submitted data to the committees indicating that the number of cases handled by social workers rose by nearly 32 percent from 2011 to 2015, while the number of social workers dropped from 83 to 76. Much of the growth has occurred in cases involving protective services for the elderly.

McEvoy said that the department is falling short of three federal quality standards for the brain injury waiver. Only 60 percent of clients had their care plans re-evaluated on a timely basis to determine if their needs have changed, even though the federal government requires that to occur in at least 85 percent of cases, McEvoy said. In addition, the department has fallen short in the percentage of care plans that include an emergency back-up plan, and in the number of care plans that show the department has informed participants of their rights and responsibilities under the waiver.

“There’s a point where you have to come to say there simply isn’t enough staff to handle all these functions,” McEvoy said.

The outsourcing proposal would not lead to any reduction in social work positions, but would free them up to work on other types of cases, department officials said.

Melinda Montovani, a brain injury specialist at the Brain Injury Alliance of Connecticut, said the ability of DSS social workers to respond to clients, families and professionals “has significantly declined over time as their workload increased.” In some cases, she said, people with brain injuries have left several messages over several weeks with no response, and when Montovani has tried to help, she found herself unable to reach a DSS worker too.

“The caseloads are simply too high for people to respond effectively,” she said in written testimony.

But Dominic Cotton, a member of the board of the Connecticut Brain Injury Support Network, said it would be better to allow DSS workers to specialize in serving a specific population, increasing efficiency. Contracting with outside agencies, he said, would add a layer of management for clients to deal with if there are problems, and could lead to case management being handled by an organization worried about maintaining its contract with the state.

Before voting to support the proposal, Human Services Committee Co-Chair Rep. Cathy Abercrombie, D-Meriden, said legislators would seek a full report from the department on how many complaints they receive after the transition.

Rep. Terrie Wood, R-Darien, asked the department to report monthly on how many people on the waiting list gain slots in the program.

Wood said she supported the proposal, with a few reservations.

“I have comfort in it. Is it perfect? No. Is it good? Yes,” said Wood, the top House Republican on the Human Services Committee.

Rep. Jay Case, R-Winsted, voted against the proposal. “We’re contracting out services, and my concern is we’re not seeing any savings on the state side of the budget,” he said, noting that it would not reduce the state workforce.

Sen. Rob Kane, R-Watertown, the top GOP senator on the Appropriations Committee, also voted against the proposal. “We need to do a better job in serving this population and making this move actually exacerbates the problem with this population,” he said.

Appropriations Committee Co-Chair Rep. Toni Walker, D-New Haven, said she voted for the proposal not because she wanted to, but because of the state’s fiscal struggles. “And it’s going to get worse as the weeks go on,” she said.

Note: This story has been corrected because an earlier version inaccurately listed Rep. Jay Case’s party. He is a Republican.