As sharp criticism built Thursday of its proposal to end state education aid to 28 of the state’s wealthiest towns, the administration of Gov. Dannel P. Malloy released data to show that most of the towns affected have among the lowest mill rates in the state and rely relatively little on state aid.

Facing a sizable budget deficit, the governor on Tuesday proposed eliminating all of the $25 million that the state currently provides to the wealthiest communities through the Education Cost Sharing grant – a move decried by Republican legislators who largely represent those communities.

“We’re in a new economic reality. With fewer resources, it requires difficult choices,” said Devon Puglia, spokesman for the Democratic governor. “We need to provide support to schools and districts that need it most. Taking the same percentage of cuts in towns with wildly varying mill rates and tax bases just doesn’t make sense. We believe we should protect those schools that rely on us most.”

The governor’s proposed budget shields the state’s 30 poorest communities from any cuts. Another 111 middle-income districts would lose $39.6 million.

With so many residents living in poverty and with comparatively small tax bases, large cities rely on the state or federal government for the overwhelmingly majority of their funding.

In the towns that would lose all their aid, the state funds account for single-digit percentages of the local education budget. For example, the $3.5 million Fairfield currently receives from the state accounts for 2 percent of its budget. In Greenwich, $3 million in state aid accounts for 1.9 percent. Among the 28 towns that would lose all funding, Norfolk relies most on state aid, with the $381,000 it receives accounting for 9.7 percent of its budget.

The legislature’s Democrat-controlled Appropriations Committee did adopt a budget earlier this month that targeted some of the state’s wealthiest communities for cuts in education aid, but those cuts were not nearly as deep as those the governor has now proposed.

In recent years, when the state increased funding for education, the overwhelming majority of it went to the state’s poorest cities and town. The state’s 30 lowest-performing districts are slated to receive $147.5 million more in state support this school year than they received during the 2011-12 school year, when the administration began allocating additional funds to those schools.

Here’s a look at the town-by-town data released by the Malloy administration: 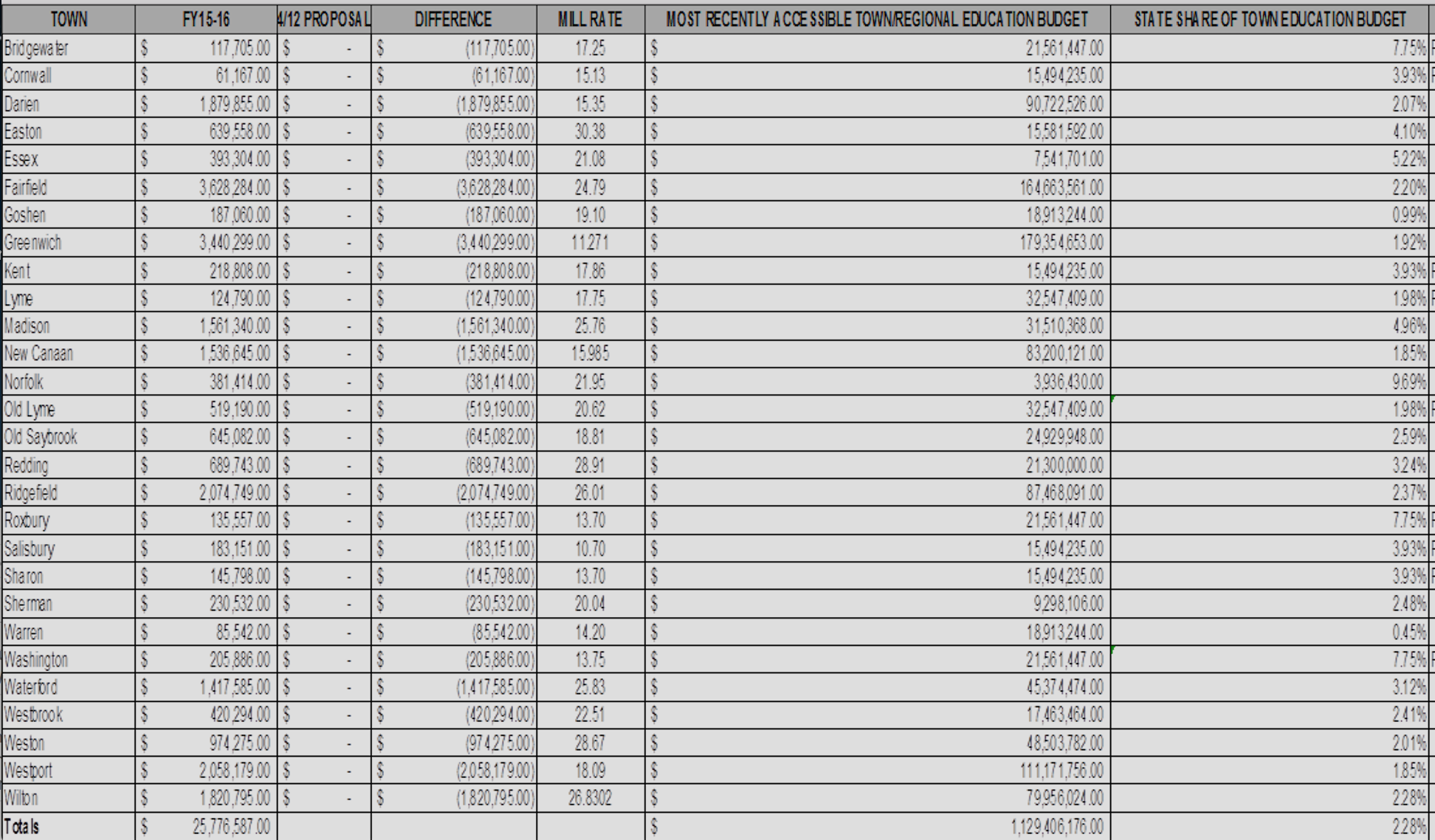