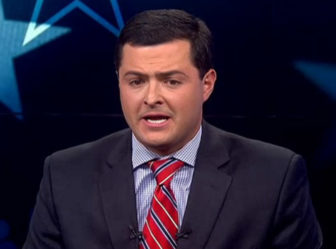 A Republican municipal official filed a complaint Wednesday with the State Elections Enforcement Commission over the Connecticut Democratic Party’s acceptance of free legal representation in defending against a previous GOP complaint.

Trumbull First Selectman Timothy M. Herbst, who was the Republican nominee for state treasurer in 2014, said he based his complaint in part on a CT Mirror story about David S. Golub charging no fee for his defense of the Democrats and Gov. Dannel P. Malloy in a case resolved by a record settlement of $325,0000

Golub is free to volunteer his time, but state law prohibits a law firm or any other business from donating services.

“It is disingenuous to pretend that no expenses were incurred by Mr. Golub’s firm in the course of his defense of the Connecticut Democrat Party,” Herbst said. “Gov. Malloy and the Connecticut Democrat Party continue to disappoint voters who have entrusted them to play by the rules.  I hope the State Elections Enforcement Commission will investigate this matter and continue to hold the party accountable.”

Golub declined to comment on the complaint or address the question of whether he used his firm’s resource in defending the Democratic Party. Leigh Appleby, a spokesman for the Connecticut Democrats, said Herbst was looking for attention.

“Provision of voluntary legal services — as both parties have relied upon for a variety of services — is fully compliant with both state and federal laws. In this case, we were involved in a protracted legal matter, and the state party has an agreement with our attorneys to ensure any and all administrative costs are appropriately handled,” Appleby said. “The bottom line is that this a political report filed by a struggling candidate for higher office looking to make a name for himself.”

The $325,000 settlement ended a fight over the power of the State Elections Enforcement Commission to subpoena emails and other documents related to how the Democrats came to solicit state contractors for contributions to support the re-election of Malloy.

A federal grand jury with the power to subpoena documents and compel testimony is trying to do what state elections regulators could not: Resolve whether the Democratic Party or Malloy broke the law in soliciting contributions from state contractors.

State contractors are banned from contributing to state campaigns in Connecticut, but they can give to federal campaigns and the federal campaign account of state parties, which are used for get-out-the-vote efforts that support state and federal candidates.

Herbst told The Mirror that he informed Republican State Chairman J.R. Romano on Wednesday morning, after filing the complaint, about the action. But Herbst also said neither Romano nor other party officials asked him to file a complaint on their behalf.

“There are certain things the party does and certain things concerned citizens do,” Herbst said, adding that he was spurred on to file a complaint after reading news accounts of the legal assistance the state Democratic Party received in defending itself in the earlier elections enforcement commission case.

“This really appears to be a flagrant violation of the law,” he added.