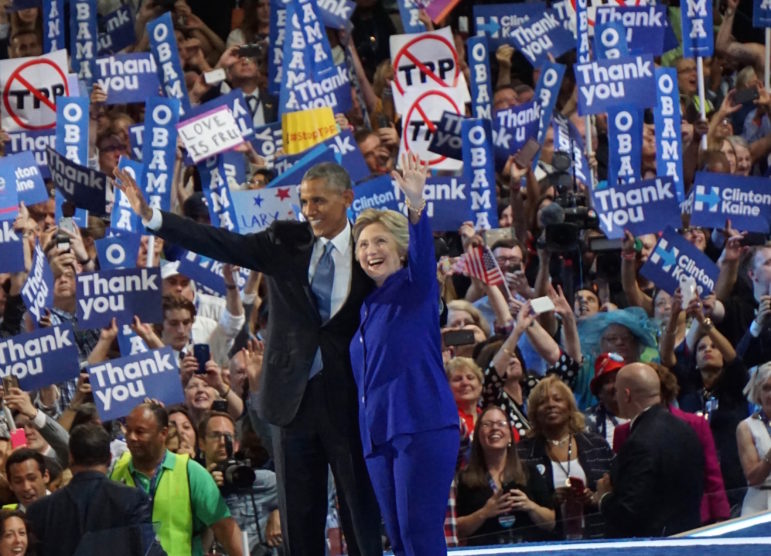 Philadelphia — Led by President Barack Obama and Vice President Joe Biden, the Democratic National Convention shook off shook off two nights of intra-party dissent Wednesday to deliver a relentless assault on the character and temperament of Republican Donald J. Trump and his dark view of an America in decline.

The Wells Fargo Center erupted in thunderous waves of cheers for the president and vice president, who gave welcome signals they are willing to spend the next three months drawing a vivid contrast between the two major-party presidential nominees, Trump and Hillary Clinton, the former first lady, senator and secretary of state.

“Fair to say, this is not your typical election,” Obama said. “It’s not just a choice between parties or policies, the usual debates between left and right. This is a more fundamental choice – about who we are as a people, and whether we stay true to this great American experiment in self-government.”

Clinton walked on stage as the president finished speaking, catching the audience by surprise. Obama turned and wrapped Clinton in a bear hug, rocking her back and forth as the delegates screamed.

Obama’s appearance came on a night when Sen. Chris Murphy of Connecticut delivered a speech on gun control, followed by the daughter of the slain principal of Sandy Hook elementary school in Newtown. The school massacre was featured prominently in a video introducing the president, who told the delegates of a painting that reminds him daily of Sandy Hook.

“It’s the painting I keep in my private office, a big-eyed, green owl, made by a 7-year-old girl who was taken from us in Newtown, given to me by her parents so I wouldn’t forget – a reminder of all the parents who have turned their grief into action,” he said.

Obama told the delegates his objections to Trump have nothing to do with the conventional, even healthy struggle between Democrats and Republicans, the contest of ideas that pushes America forward.

“But what we heard in Cleveland last week wasn’t particularly Republican – and it sure wasn’t conservative,” Obama said. “What we heard was a deeply pessimistic vision of a country where we turn against each other, and turn away from the rest of the world.  There were no serious solutions to pressing problems – just the fanning of resentment, and blame, and anger, and hate.”

It was the speech Democrats had hoped to hear from a president they see as always dignified, but too often detached from the hurly-burly of politics.

“He’s getting to the time where the gloves can come off,” said U.S. Rep. Jim Himes, D-4th District, who unseated Republican Chris Shays in 2008, carried by Obama’s appeal in Bridgeport, Stamford and Norwalk. “I think he’s ready.”

Gov. Dannel P. Malloy, who won close elections in 2010 and 2014 after visits to Connecticut by Obama, said the president needed to do the same for Clinton and the Democrats running for Congress and governor.

But the governor also agreed with Himes that Obama can and should take on Trump, employing the mordant humor the president employed at Trump’s expense at a White House Correspondents’ Dinner two years ago. Trump was a no-show this year.

“When he’s telling a story, when he’s zinging it with a sense of humor, there is nobody better at doing that, and he should use that as often as he wants because this guy, he has a glass chin,” Malloy said. “He says absolutely ridiculous things.”

Himes said Obama could be crucial in broadening Clinton’s base.

“The president has always been successful in speaking to young people, and what’s one of Hillary’s largest challenges right now, migrating younger voters away from Bernie Sanders to support her,” Himes said. “I think the president can play a really important role there. He still speaks to young people.”

State Sen. Gary Winfield of New Haven, a Bernie Sanders delegate, said Obama has work to do in his own party.

Obama mentioned the Sanders campaign once.

“So if you agree that there’s too much inequality in our economy, and too much money in our politics, we all need to be as vocal and as organized and as persistent as Bernie Sanders’ supporters have been,” Obama said.

Biden, former New York Mayor Michael Bloomberg and Clinton’s running mate, Virginia Sen. Tim Kaine, all mocked Trump as a self-promoting reality-TV star, a fraud who boasts of his business successes despite a long record of bankruptcies and litigation by angry investors and vendors.

“Trump says he wants to run the nation like he runs his business, God help us,” said Bloomberg, a Republican-turned-independent. “I’m a New Yorker, and I know a con when I see one.”

Biden, who grew up in working-class Scranton, Pa., said Trump appeals to the middle-class without understanding them.

“This guy doesn’t have a clue about the middle class, not a clue,” Biden said. “He has no clue about what makes America great. Actually, he has no clue, period.”

The delegates gleefully chanted, “Not a clue! Not a clue!”

Biden was wistful, knowing his long career was nearing an end.

“I see some of my friends and colleagues, like my buddy Chris Dodd up in the Connecticut delegation,” he said.

Obama said Clinton, his opponent for the Democratic nomination in 2008, then his top adviser on foreign affairs as secretary of state, is ready for the Oval Office.

“Until you’ve sat at that desk, you don’t know what it’s like to manage a global crisis, or send young people to war. But Hillary’s been in the room,” Obama said. “She’s been part of those decisions.  She knows what’s at stake in the decisions our government makes for the working family, the senior citizen, the small business owner, the soldier, and the veteran. Even in the middle of crisis, she listens to people, and keeps her cool, and treats everybody with respect. And no matter how daunting the odds, no matter how much people try to knock her down, she never, ever quits.”

“That’s the Hillary I know. That’s the Hillary I’ve come to admire,” Obama said. “And that’s why I can say with confidence there has never been a man or a woman — not me, not Bill —  more qualified than Hillary Clinton to serve as President of the United States of America.”

A shot of a laughing, applauding Bill Clinton filled the giant video screen.

“He’s not really a plans guy,” Obama said. “Not really a facts guy, either. He calls himself a business guy, which is true, but I have to say, I know plenty of businessmen and women who’ve achieved success without leaving a trail of lawsuits, and unpaid workers, and people feeling like they got cheated.”

“Does anyone really believe that a guy who’s spent his 70 years on this Earth showing no regard for working people is suddenly going to be your champion?  Your voice?”

Obama contrasted Trump’s pessimism with the hopefulness of Ronald Reagan, a name not typically invoked at a Democratic National Convention.

“America is already great. America is already strong. And I promise you, our strength, our greatness, does not depend on Donald Trump,” Obama said. “In fact, it doesn’t depend on any one person. And that, in the end, may be the biggest difference in this election – the meaning of our democracy. Ronald Reagan called America ‘a shining city on a hill.’ Donald Trump calls it ‘a divided crime scene’ that only he can fix. It doesn’t matter to him that illegal immigration and the crime rate are as low as they’ve been in decades, because he’s not offering any real solutions to those issues.

“He’s just offering slogans, and he’s offering fear. He’s betting that if he scares enough people, he might score just enough votes to win this election.”

It was the speech Jim Himes hoped to hear. 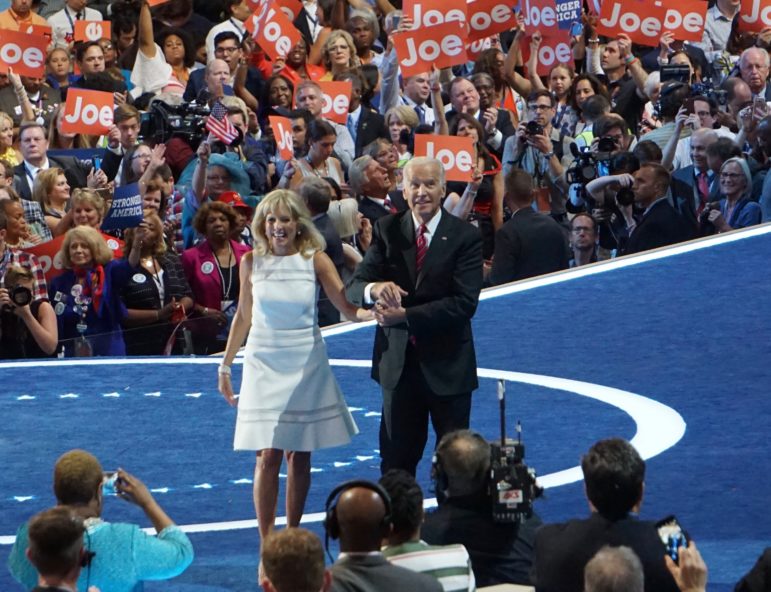