Blumenthal, others who helped sales of EpiPen, want probe of price hikes 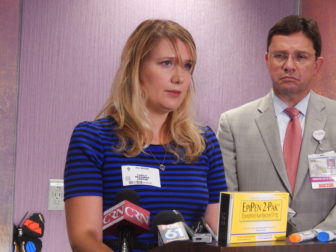 Jill Negro of Wallingford speaks at a press conference held by Sen. Richard Blumenthal Wednesday. Negro has two children who have food allergies that require her family to own EpiPens.

Washington – Like other lawmakers now calling for an investigation of the massive hikes in the price of EpiPens, Sen. Richard Blumenthal backed legislation that encouraged schools to stock the auto-injector that delivers a drug that counters the effects of a potentially fatal allergic reaction.

In 2013, Blumenthal was an original co-sponsor of a bill – which became law – that awards grants to states that require their public elementary and secondary schools to maintain a supply of emergency epinephrine, the drug delivered by EpiPens.

EpiPen maker Mylan lobbied hard for approval of the legislation that would boost sales of their product. While the price of EpiPen had risen about 60 percent in the years before the legislation was approved, it soared after President Obama signed it into law.

After the federal law was implemented, Connecticut passed a state law that requires all schools to stock EpiPens.

When Mylan bought he company that manufactured the injector in 2007, the cost for a single EpiPen was $57 dollars. Just nine years later, the cost has skyrocketed to as much as $700 for a pack of two, and the company has stopped selling single units.

“I am all the more outraged by Mylan’s price gouging practices because they are exploiting the 2013 law as well as their monopoly position,” Blumenthal said.

He said he is proud of the legislation that provides grant support to states that require their public elementary schools and secondary schools to maintain a supply of emergency epinephrine, but that Mylan is “morally bankrupt and has a clear responsibility to reverse these devastating price increases to ensure continued access to this life-saving medication.”

In a statement, Mylan said it has “worked tirelessly over the past several years advocating for increased anaphylaxis awareness, preparedness and access to treatment for those living with potentially life-threatening (severe) allergies.”

The company said it also has programs to help patients pay for EpiPen.

“Ensuring access to epinephrine – the only first-line treatment for anaphylaxis – is a core part of our mission,” Mylan said.

Mylan CEO Heather Bresch is the daughter of West Virginia Sen. Joe Manchin, a Democrat who helped forge a compromise on a bill that would expand FBI background checks of gun buyers. Blumenthal promoted that legislation, which failed in the Senate, in the wake of the Sandy Hook Elementary School shootings in December 2012.

At a press conference in Hartford Wednesday, Blumenthal called for hearings on the price spikes by the Senate Judiciary Committee and the Senate Energy and Commerce Committee. He also called on the Federal Trade Commission to investigate.

“Mylan will soon be on the price-gouging ‘wall of shame’ for its brazen, blatant, astronomical price increases simply because it has a monopoly,” Blumenthal said. “It has monopolistic control over the market. It is the only producer of an auto-injector pen that makes this epinephrine available to school teachers and parents and others who do not have the training to do the other kinds of injections that can be done.”

Blumenthal also released a letter to Bresch that asks her to immediately lower the price of EpiPen and questions the effectiveness of the help the company gives those who can’t afford  her product.

“This ‘savings offer’ maxes out at $100,” Blumenthal wrote. “What other programs do you have to help consumers cover the remaining $500 that the underinsured, uninsured, or those with high deductible plans may be forced to pay annually?”

Blumenthal declined to criticize Manchin’s daughter, but conceded she would be a key witness at a congressional hearing.

“The issue here is not the identity of the CEO; it is predatory and problematic pricing and morally bankrupt exploiting of monopolistic power,” he said.

Other lawmakers who, like Blumenthal, sponsored the epinephrine legislation, have asked for a congressional investigation too or decried the price hikes.

They include Sen. Amy Klobuchar, D-Minn., whose daughter requires an EpiPen for her allergies, and Sens. Mark Warner, D-Va., and Bernie Sanders I-Vt.

“Something is very, very wrong when drug companies value their profits over the lives of their customers,” Sanders tweeted Tuesday.

Clinton called for Mylan to immediately lower the price of EpiPens since the company could not justify its pricing, and she referred to her plan that would require pharmaceutical makers to justify their price increases.

“I believe that our pharmaceutical and biotech industries can be an incredible source of American innovation, giving us revolutionary treatments for debilitating diseases,” Clinton said in a statement. “But it’s wrong when drug companies put profits ahead of patients, raising prices without justifying the value behind them.”

There may be hearings on the EpiPen price increases when Congress reconvenes next month. At  least one Republican, Sen. Charles Grassley of Iowa, who heads the Senate Judiciary Committee, indicated he’s open to an investigation.

But it’s not clear whether Congress can effectively rein in drug price hikes.

Congress has held hearings on pharmaceutical companies Turing and Valeant hiking the prices of rare drugs, but has not approved any legislation that would address price increases.

Meanwhile, parents like Jill Negro, a  stay-at-home mother and part-time teacher in Wallingford who spoke at Blumenthal’s press conference, struggle to pay for epinephrine for their children.

Negro said she has two sons with food allergies and a high-deductible health plan and estimates she will pay $4,000 for the drug in 2017 when her oldest son starts school.

“Our medical expenses will be high regardless, and I’ve come to accept that,” she said. “What I do not accept, however, is arbitrarily raising drug prices beyond what we and most families can afford.”