Key question for legislators: How to count high-need students? 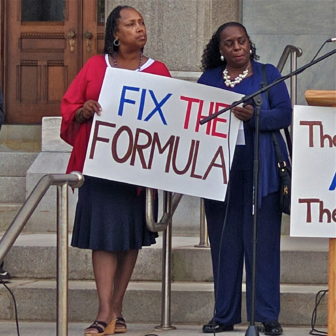 Hartford residents at the state Capitol last September joined legislators and students to call for overhauling how the state funds schools.

The governor’s proposed shakeup of state school aid – and how much extra money districts should receive for impoverished students – is facing complications as the legislature debates how to move forward.

A key provision of the governor’s plan would change the way the state counts low-income students. Instead of using the number of students in the free- or reduced-price meals program, the number enrolled in Medicaid would become the measure of student poverty.

The change produces a number of consequences:

The governor’s plan also would change the formula for computing state aid so that districts receive an additional 20 percent for each student from a low-income family rather than the current 30 percent. Districts would continue to receive no extra aid under the formula for students who are English-language learners. Several legislators have voiced concern that the formula assigns these students no additional weight.

“We stand ready to find the best poverty proxy,” Wentzell told the education subcommittee of the legislature’s Appropriations Committee Monday.

Education funding reform: More for the cities — or maybe lessSome education aid increases might not be spent on schoolsSee how your town fares in the governor’s proposed budget

The last time the governor attempted to use HuskyA in the school funding formula was in 2013 – and it is the reason that state budget bills have since put aside the formula and instead have appropriated specific amounts for each municipality.

When the governor proposed the change in 2013, he also was proposing aid increases and released corresponding town-by-town funding amounts. But his accompanying formula was based on HuskyA data that was outdated and included non-school aged students.

The formula would not have produced the amounts the town-by-town listing showed, but the legislature did not back away from them, thus decoupling the aid amounts from the formula.

Concerns with the use of Husky A have not been resolved since.

“I am concerned about the Husky A being used as the new indicator,” state Sen. Heather Somers, R-Groton, told the education commissioner Monday. “There is a gap or a void. The true wealth of a community is not being captured. I have a real concern about that.”

Officials from the education department said they are working with the Department of Social Services to come up with the number of school-aged students actually receiving HuskyA. However, before the two agencies can begin that work, they must complete a legal contract so they can share relevant information. 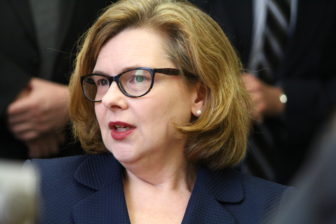 Other legislators expressed concerns with the lack of extra credit a district would receive for undocumented students and English learners.

Wentzel said there is no perfect way to count poverty. Using the number of students who qualify for free- or reduced-priced meals has grown complicated since more and more districts are moving toward universal feeding programs that provide free lunches to every student, regardless of eligibility. In those cases, the state uses a calculation to determine how many students should be counted in the school-funding formula.

Wentzell also said she believes many undocumented immigrants already are not being counted because they are hesitant to fill out application forms for the meal program.

Another option is to use census data, which is problematic since at times it is almost 11 years old.

“You’ve captured a lot of the tensions….” Wentzell told legislators Monday, “This is a very hard year for you take make very difficult decisions.”