‘Early intervention is the key:’ Identifying trauma in young children 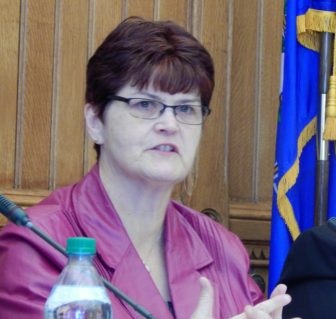 “Mom, I’m so sorry that you got me for a son and not somebody better,” he’ll tell her. She tells him she wouldn’t trade him or his sister for anything.

But she wishes she’d gotten him help sooner.

Sostak’s son experienced trauma at a young age. His birth mother gave him up for adoption at three months old, and it was another six months before Sostak and her husband adopted him. Looking back, she can tell there were signs that he had trouble trusting even then – signs she became aware of when they adopted their daughter two-and-a-half years later and, struck by the differences, began learning about attachment and trauma. But when Sostak approached professionals about her concerns, they didn’t listen, or told her she was being overprotective.

Things got more challenging after a period of upheaval in the family – within just a few months, two relatives died, Sostak’s husband retired from the Navy, and their children switched schools.

Sostak’s son could become aggressive or overwhelmed with anxiety. Sometimes it seems as if he’s testing them, to see if they really want to keep him.

“With all my being, I cannot stress this enough: Early intervention is the key,” Sostak told an audience at the state Capitol Thursday. “My son’s now getting intervention, and it’s working. But he’s now 15, and we have a long road to go.”

Changing course after a child is exposed to traumaFrom brain science to Stop & ShopRecognizing trauma and isolationCT stepping up efforts to treat trauma in the very youngReport: CT has made progress on child trauma, but gaps persistCT officials see targeting trauma as key to improving healthHow to talk about trauma

Sostak spoke at a forum on the Early Childhood Trauma Collaborative, a five-year, federally funded effort to improve outcomes for young children exposed to trauma.

The effort builds on work done in recent years to dramatically expand the availability of proven trauma treatment models to children and teens across the state. But much of that work has been focused on school-aged children, leaving gaps in the availability of services for children under 7, said Judith Meyers, president and CEO of the Child Health and Development Institute of Connecticut, which is leading the effort.

That’s in spite of significant needs. According to data from the Child Health and Development Institute, 44 percent of children aged 2 to 5 have experienced a potentially traumatic event such as physical or sexual abuse, violence, or the death of a loved one. Forty-nine percent of maltreated children in Connecticut are under 6. And because trauma can affect brain development, learning, relationships and health, young children are particularly vulnerable to the effects.

Young children often don’t have the language to convey the impact of trauma they experience, and instead express it in ways that seem like behavioral problems, said Jason Lang, a psychologist and director of dissemination and implementation at the Child Health and Development Institute.

“And behavior problems are dealt with in a much different way than trauma,” he said.

The collaborative is intended to make it easier to identify when young children have experienced trauma and to get them help when needed. Among other things, it aims to train those who work with young children – ranging from child care workers to child welfare staff – so they have an understanding of trauma and how to access services if needed. It will help mental health agencies train staff to deliver proven trauma treatments for children under 7, models which involve working with the child’s parents or caregivers as well.

One of the key factors in how a child responds to trauma is having support from a loving parent or other caregiver, Lang said. But he and other experts said that often, parents have had their own histories of trauma, and treating a child’s trauma must address the needs of both the child and parent.

“We know now that that’s not true,” she said. “Just because a person doesn’t necessarily have the cognitive ability to process or the language to articulate that a trauma has happened to them, which most young kids don’t have…it doesn’t mean that they don’t have the experience in a visceral way.”

Mendez likened trauma to asthma: It can’t be cured, but people can learn how to manage its impact.

Making more people aware of the signs of trauma, and what to do about them, will be critical, said Alice Forrester, executive director of the Clifford Beers Clinic in New Haven.

“The epidemic that we’re dealing with is so broad and so deep that even if you think, ‘Well, I’m not in that specialty,’ or ‘I don’t do that, I just run a child care center,’ that’s not true,” Forrester said. “You’re dealing with trauma. So the question really is then, how can I help?”

Forrester’s organization is part of the New Haven Trauma Coalition, which works in schools. Among children who are deemed high-risk and assessed clinically, 38 to 50 percent are found to have post-traumatic stress disorder, Forrester said. They are then referred to a school-based trauma treatment program, and Forrester said students who participate have shown improved attendance and fewer suspensions. 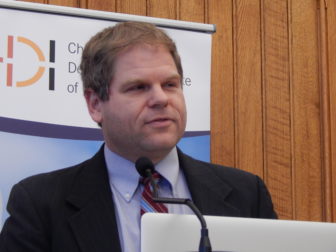 “If we don’t talk about it, the hundreds of thousands of children who are suffering from it are suffering alone and in silence,” he said.

Gov. Dannel P. Malloy spoke of his own experiences growing up with severe learning disabilities and physical disabilities, and said his understanding of trauma comes in part from his mother, a school nurse who saw the struggles of children firsthand.

The governor noted that the forum was being held in Hartford, “one of our cities that is most ravaged with crime, particularly violent crime,” where he said children are exposed to trauma daily.

It’s clear that children who receive help will do far better than those who are ignored or told to just suck it up or be brave, he said. “And yet we can’t quickly enough evolve that system to address this issue,” Malloy said.

“I suppose we could say some of it’s budgetary, but some of it’s setting our priorities budgetarily,” Malloy said. “It’s whether we will invest sufficiently in preventing life’s mistakes by repairing earlier episodes, or whether we’ll spend it on incarceration and long-term treatment and disability.”

Sostak, who lives in Groton and is part of the Early Childhood Trauma Collaborative’s advisory committee, as well as an early childhood educator, said she is hopeful for her son.

“I’m seeing him smile for the first time in years through treatment,” she said.

She told the audience that some of them might see her son and think he’s a juvenile delinquent – and she acknowledged that he can act that way.

“When I look at my son, I see that, but I also look and I know his heart. His heart is there, he’s there, and I know he is,” Sostak said. “And it’s my job, and our job as a community, to pull that out of these kids and get them through this and get them to engage in relationships again and trust.”