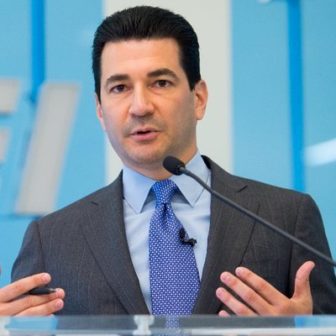 Washington – Sen. Chris Murphy will introduce Scott Gottlieb, a Westport resident and candidate to head the Food and Drug Administration, to fellow members of the Senate panel that’s key to his confirmation – but that won’t keep the nominee from having a bit of a rough ride among Democrats.

At Wednesday’s confirmation hearing by the Senate Health, Education, Labor and Pensions Committee, Murphy is expected to talk about Gottlieb’s career as a doctor – he once practiced at Stamford Hospital – and of his prior experience at the FDA.

In his recent financial disclosure letter to the Department of Health and Human Services counsel for ethics, Gottlieb disclosed financial relationships with over 25 companies, many of them giants in the biotech and pharmaceutical industries, including GlaxoSmithKline.

In his ethics letter, Gottlieb said he would recuse himself from “particular matters” that involve any of the pharmaceuticals or health care companies he’s been involved with.

“But he is going to be in on many broad policy decisions that will benefit the bottom line of companies with whom he has had a relationship for years,” Carome said.

As FDA commissioner, Gottlieb would lead an agency that has oversight of more than a fourth of  the U.S. economy, including not just pharmaceuticals but medical devices, food safety, cosmetics and other areas of human and animal health.

His selection has been praised by several GOP senators, including Sen. Lamar Alexander, R-Tenn., the head of the HELP Committee.

“Dr. Gottlieb has impressive qualifications helping American patients as both a physician and in his previous roles at the FDA,” Alexander said.

Even critics like Carome say Gottlieb’s credentials and experience make him well-qualified for the job. Trained at Mount Sinai School of Medicine, he’s been a practicing doctor and a prolific writer and speaker on medical innovations. He also knows the inner workings of the FDA, having served as the agency’s deputy commissioner under President George W. Bush.

“He brings to the table a certain amount of medical knowledge and knowledge about the FDA,” Carome said.

Gottlieb is also a cancer survivor, having been successfully treated for Hodgkin’s lymphoma.

A problem for Carome and others, however, is Gottlieb’s conservative leaning on health care policy. 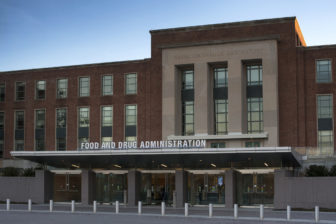 The main entrance of FDA Building 1, which houses the commissioner’s office.

Gottlieb is a venture partner at New Enterprise Associates, where he focuses on health care investment. But he’s also a resident fellow of the American Enterprise Institute and a regular contributor to the Wall Street Journal, Forbes and other publications where he criticized the Affordable Care Act and what he views as excessive federal regulation.

“In so heavily prioritizing one of its obligations — the protection of consumers — the FDA has sometimes subordinated and neglected its other key obligation, which is to guide new medical innovations to market,” Gottlieb wrote in a 2012 issue of National Affairs. “Ultimately, the only way to change the threshold for approval of these sorts of drugs is to change the FDA review culture itself.”

The Pharmaceutical Research and Manufacturers of America, the pharmaceutical industry’s trade association, backs the nomination.

But Rep. Rosa DeLauro, D-3rd District, the top Democrat on a House Appropriations subcommittee with authority over the FDA, said Trump’s choice of Gottlieb “sends a dangerous message that he is committed to rolling back regulations and opening the floodgates to potentially dangerous drugs and medical devices.”

“With Mr. Gottlieb’s nomination, I am extremely concerned that President Trump will use the FDA as his go-to agency for his plan to repeal two existing regulations for every new regulation proposed,” DeLauro said in a statement. “We have these regulations in place to ensure that our nation’s drug supply is safe, effective, and life-saving. Now that Mr. Gottlieb will oversee the FDA, he must remove himself from any pharmaceutical industry ties — of which he has many — and work for the American people, not for the drug and medical device industries.”

If Gottlieb is approved by the Senate, there are concerns among Democrats that he may target “off-label” promotion of certain drugs. During the Obama administration, the FDA issued tighter restrictions on how companies could market drugs for conditions not mentioned on drug labels. Gottlieb has been critical of those restrictions.

Given the GOP majority in the Senate, Gottlieb’s chances for confirmation are good.

“Odds are that he will be confirmed,” said Carome.

Murphy has not taken a position on the nominee. Spokeswoman Laura Maloney said he ”will be thoroughly reviewing his record and his testimony from the hearing.”

But fellow Democrats already have said they oppose the nominee.

Sen. Edward Markey, D-Mass., was one of the first, saying he is concerned a Gottlieb-led FDA will not be vigorous enough in investigating the role drug companies play in the nation’s opioid crisis.

“Dr. Gottlieb has said he wants the FDA approval process to move faster, and that FDA has too high of a standard for safety. I strongly disagree with that,” Markey said during a call with reporters on Tuesday.

Gottlieb’s disclosure statements show that since the beginning of 2016 he has received almost $45,000 in speaking fees from firms involved in the manufacture and distribution of opioids.