His grassroots rebellion stops a federal railroad plan in its tracks

Greg Stroud is a quiet, thoughtful academic with limited experience in civic engagement, but he transformed into a relentless community organizer and grass-roots lobbyist after learning of a proposal from Washington, D.C., aimed at boosting the speed and capacities of trains in the Northeast Corridor.

That proposal from the Federal Railroad Administration included construction of a bypass from Old Saybrook to Rhode Island that would have resulted in running high-speed trains through his town of Old Lyme — a plan he says would ruin the artist colony’s historical nature and unique culture.

Using social media, mainly Facebook, Stroud rallied his neighbors in Old Lyme to oppose the plan. But he did not stop there.

Stroud reached out to historical societies, preservationists and local officials in Rhode Island who were unaware of the proposal, resulting in opposition to the bypass in that state as well

Then he expanded the rebellion against the FRA’s NEC Future plan to towns along the Connecticut coastline and into Fairfield County, where the rail plan proposes to lay new tracks. He ran the entire campaign with about $15,000 collected from sympathetic donors.

Although NEC Future is a blueprint for the entire Northeast Corridor, from Washington, D.C., to Boston, the greatest pushback to the plan came from Connecticut, thanks in large part to Stroud’s efforts. The resistance movement he led is likely to result in significant changes, including the elimination of the proposed Old Saybrook to Rhode Island bypass.

Among other things, the campaign also resulted in Stroud’s appointment as the director of special projects for the Connecticut Trust for Historic Preservation. The Mirror spoke to Stroud about his metamorphosis from academic to activist.

How did you get involved in this issue?

My academic background is in preservation, but in Russia. I was working on a Russian project, but I took a break and I looked at my email and I had a Google alert set for Old Lyme. Nine times out of 10 the Google alert is for an accident on I-95, but this one was different. It was about the Old Saybrook to Kenyon [Rhode Island]  bypass. So I started reading the plan and making sense of it, and the more I read about it the more seriously I took it. That was in January of last year. And I’ve been working on it every day and night ever since.

How did you connect with the Connecticut Trust for Historic Preservation and start your campaign?

We reached out through social media, and the first statewide partner we found was the Connecticut Trust and its director, Daniel McKay, who has a background in infrastructure programs, in big projects, so we hit it off right away. We met on January 29 [2016] and we’ve been working together every day ever since. So for the last year I worked pro-bono and set up a grass-roots group, which was  SECoast, and the question was – how do you fight or how to you engage a giant $130 billion federal project with the support of the Connecticut DOT and the support of all these federal agencies?

We used social media and we reached out to the press and we used technology and knowledge to leverage against the bureaucracy. 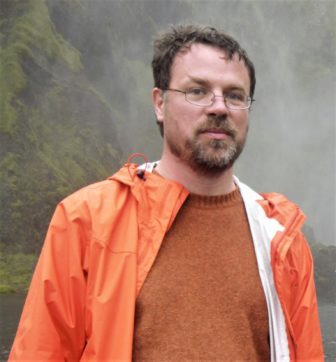 No.  I’m not an activist by nature. I’m an academic. But working though large, complicated documents is what historians do. So it was a labor of love if you will. I was new to this, but so was pretty much everybody else because it is a once-in-a-lifetime plan. So essentially a lot of press, a lot of planners, a lot of politicians were trying to make sense of [NEC Future]  at the same time. So part of my job was to interpret the plan and serve as a clearinghouse as well.

How did the opposition to NEC Future grow?

It turned out that Old Lyme would be the town most impacted in the entire Northeast Corridor. So that’s how we initially got on board. Then gradually word of the plan was regionalized, then it went statewide and to Rhode Island as well.

Yes, concerns have spread, and I think you have a lot to do with that. I can understand your concerns about Old Lyme, but why were you involved in questioning the plan in other parts of the state?

If you believe in the ability of government to do good, and if you believe that the federal government can make wonderful changes for its citizens, then when the government does something you believe is wrong, it’s unethical. The more I learned about the process, the more I felt I had to engage it… I haven’t been able to open up the writing project that I abandoned last January even once.

The Federal Railroad Administration was pressured to extend its public comment period last year. And after it did it was surprised to receive hundreds of letters from Old Lyme residents opposed to the bypass plan. You were behind that, right?

That was something we were quite proud of. When the public comment period was supposed to close at the end of January of 2016, there were probably about a half dozen comments from southeastern Connecticut, and within two weeks we got more than 1,000 comments, in fact we think closer to 1,500 or 1,700 and that was more than Boston, New York and Philadelphia combined. That was a key turning point. It brought the FRA to the area. It wasn’t the brilliance of the arguments, it was the sheer weight of them.

You say a high point of the campaign was finding maps of the FRA’s preferred route for a new Northeast Corridor, which contained the bypass, even as the agency had proposed three other alternatives for the public to weigh in on and said it hadn’t made up its mind on which one it would choose…

They denied these maps existed or that there had been a final decision. Finding these maps gave us credibility. The whole point of the process is that the public is supposed to have a chance to participate. The law clearly states the Federal Railroad Administration must make diligent efforts to involve the public. And over the course of a year I think we clearly proved the federal government fell short in this regard.

I do believe that prioritizing commuter rail and shorter-distance rail is to the benefit of Connecticut. That said, we’re not against modernizing the Northeast Corridor, it’s simply that if this is a once-in-a-generation blueprint, you cannot release that blueprint on a Friday before the winter holidays, as they did, and leave the public out.

You were not born in Old Lyme.

I was born in Rochester, New York… as many academics, I’ve traveled around.  In my old home town of Rochester, the neighborhood I grew up in had a highway built through it. That was in the 1970s. So there was a lot of personal and a lot of professional background that made me a good fit for this.

What was the biggest disappointment in all of this, what was the lowest point for you?

It’s been the inability to get the Federal Railroad Administration to have a meeting in Old Lyme or southeastern Connecticut where people can ask questions. Actually the lowest point was also the highest point. It was in August of last year when we had a meeting in Old Lyme and more than 500 people showed up.

It seems the Federal Railroad Administration is going to change its plan. Are you confident you have won this battle over the bypass?

I’m cautiously optimistic and increasingly confident about the Kenyon to Old Saybrook bypass. It just feels untenable. What happens in Fairfield County, we’re not sure. 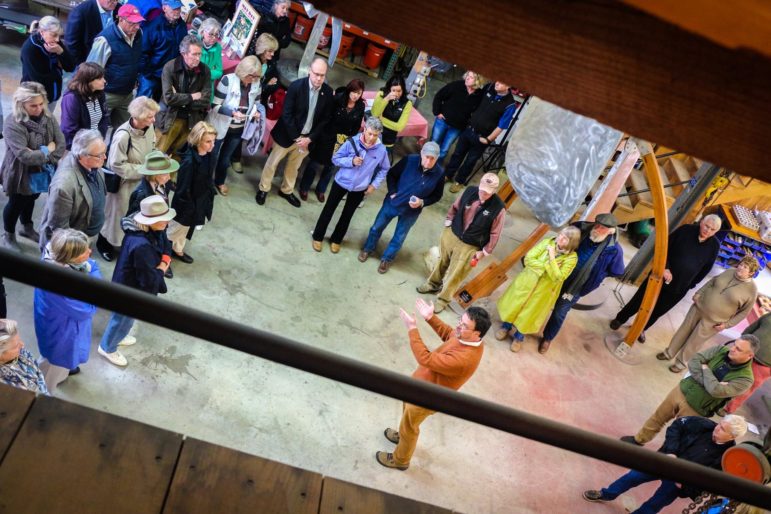 Greg Stroud leading a rally in Old Lyme in May of last year.