With Obamacare at risk in CT, 73K could lose subsidies 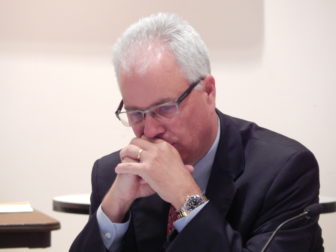 Washington – Connecticut is among several states in danger of losing all the insurers who participate in their Affordable Care Act exchanges – a move that would leave tens of thousands of state residents scrambling for coverage and ways to pay for it.

Connecticut consumers once had a choice of four carriers on the Access Health CT exchange, but Anthem and ConnectiCare are the only ones left. Neither has committed to staying beyond the end of this year.

“There is a fear that one or both the insurers could leave the exchange,” said Matthew Katz, executive vice president of the Connecticut State Medical Society.

If one insurer leaves the exchange, there will be a lot less choice of policies for consumers. If both leave the exchange, subsidies to help pay premiums will end for nearly 73,000 Connecticut residents. Nearly 48,000 of those exchange customers also will lose federal help paying out-of-pocket costs like deductibles and co-payments. Under the ACA, only policies sold on the exchange can be subsidized.

Access Health CT CEO James Wadleigh, said the entire exchange, singled out by the Obama administration for its smooth operation, would not collapse, but the exchange’s services to about 100,000 individuals who purchase insurance – 73 percent with the help of subsidies – would collapse. Wadleigh said the exchange would continue to enroll eligible Medicaid patients through the ACA’s expansion of that program and serve small businesses what would still be able to purchase coverage through Access Health CT.

“There is a lot of instability in the state exchanges right now,” Wadleigh said.

The nation’s insurers also say they are hurt by instability – generated in large part by uncertainty about the efforts to repeal and replace the ACA in Congress.

Wadleigh said the policies insurance companies sell to individuals are a tiny portion of their business, from 1 to 5 percent. Employer-based plans and other large- and middle-group policies make up the lion’s share of an insurers’ market, he said.

Insurers say the customers they have found on state exchanges like Access Health CT are older and sicker than they would have liked, costing them money.

“Why would you want to stay in a market when you continue to lose hundreds of millions of dollars?” Wadleigh asked.

The Connecticut Insurance Department announced Monday it would hold hearings on the rate increases on June 14.

If insurers approve the rate hikes, it will be tough for people, even those who receive the Affordable Care Act’s subsidies, to pay for insurance.

If the Insurance Department rejects or lowers the proposed increases, insurers could leave the exchange. That’s what ConnectiCare threatened to do last year when its proposed rate increase was not fully approved.

The insurers have until Sept. 1 to decide whether to continue to sell policies on Access Health CT.

While the Insurance Department’s actions will impact their decision, actions in Washington are having a greater impact on whether insurers stay on state exchanges, Wadleigh said.

He said that in his conversations with Anthem and ConnectiCare, the insurers say the fate of the ACA’s cost-sharing reduction program is “the No. 1” factor influencing that decision.

The cost-sharing program reimburses insurers for the subsidized deductibles and co-payments of low-income people who qualify for the plan. Those eligible for the lower copayments and deductibles must earn no more than 250 percent of the federal poverty level, about $30,000 for an individual and $60,750 for a family of four.

The program became a political hot potato for Republicans in the House of Representatives, who sued the Obama administration because it set up the program without funding authorization from Congress.

Insurers are reimbursed on a monthly basis, and they have received payments for May. But there has been no commitment from President Donald Trump or Congress to make future payments.

If payments stop, consumers would continue to receive subsidies to help pay their out-of-pocket costs until an insurer raised premiums or canceled the policy. Until then, insurers, doctors and hospitals would suffer a substantial loss of income.

In a letter to Senate leaders last week, America’s Health Care Plans, a major industry group for insurers; the American Medical Association; other provider groups; and the U.S. Chamber of Commerce urged Congress to secure funding for the cost-sharing program through 2018.

“Unless CSRs are funded, a tremendous number of Americans will simply go without coverage and move to the ranks of the uninsured,” the letter said. “This threatens not just their own health and financial stability, but also the economic stability of their communities.”

Anthem CEO Joseph Swedish said if those CSR payments end, his company’s participation in the exchanges would become “even more challenging.”

“It’s really creating havoc in (the individual) market,” Katz said of the uncertainty.

The House approved a heath care bill on May 4 that did not contain the CSR payments. The Senate is working on its own legislation to repeal and replace the ACA, but few details of their effort are known.

Connecticut is not the only state in danger of losing all insurers on its ACA exchange. Two of the insurers currently selling policies on Iowa’s exchange have announced they will leave next year, and the third, Minnesota-based Medica said its continued participation is “in question.”

Other states will lose insurers in some of their counties. This retreat of insurers from state exchanges – Aetna recently announced it is quitting all of them – is being cited by Republicans as evidence of the ACA’s inherent weakness and of its imminent collapse.

But Brad Wilson, the CEO for Blue Cross/Blue Shield North Carolina, told the news website Vox that doubts about the continuation of the CSR payments and a lack of clarity about attempts to replace and repeal the ACA are creating chaos in his industry and leading to the premium hikes his company and others are seeking.