A concession deal struck, but still no budget

The week in Connecticut started with political drama and a squeaky close vote on a package of wage and benefit concessions critical to shaping the Connecticut state budget – when the legislature can finally adopt one.

As is often the case, however, Connecticut’s politics were upstaged by events at the White House, where President Donald Trump fired his bombastic communications director Anthony Scaramucci after only 10 days on the job.

At the state Capitol, Lt. Gov. Nancy Wyman cast the decisive vote to approve the concessions package, projected to save the state $1.57 billion dollars over the next two years. The vote earned her criticism from Republicans as an “enabler” of Gov. Dannel Malloy’s policies. 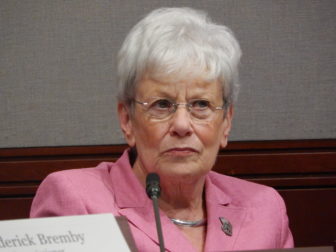 Republicans say the deal will be self-defeating and put the Democrats in the position of having to raise taxes, cut services and municipal aid or both in order to cover the remainder of Connecticut’s projected $5 billion deficit. Three Democratic senators had reservations and withheld their approval of the deal until receiving some assurance that structural budgetary changes would be forthcoming.

Whether to pass a sales tax increase appears to be the next big question.

Meanwhile, not having a budget continues to visit more immediate and painful effects on those who rely on state funds, notably the agencies who deliver services to the needy. The first cuts took effect last week.

The next place Gov. Dannel Malloy plans to economize is school spending. He warned that he would shift aid from more affluent districts to poorer ones if there is still no budget in place when it comes time to distribute the aid. Certainly the state’s poorer and minority-heavy school districts have enough challenges already, since the latest SAT scores indicate that the majority of their high school juniors are not reading or writing well enough to begin college or start a career.

Back in Washington, D.C., the U.S. Senate’s inability to repeal or replace the Affordable Care Act did not bring much relief to Connecticut’s health care insurance exchange. There will still potentially be changes to Connecticut’s health care system that negatively affect tens of thousands of state residents. Months of uncertainty over the health care legislation also has made it harder for the state exchange, Access Health CT, to enroll new customers.

There is uncertainty regarding federal tax law, too – specifically over concern that Republican tax reform would eliminate the deduction for state and local taxes. Some 718,000 Connecticut taxpayers claimed $13.6 billion in such deductions on their 2014 returns, IRS data shows.

The Deferred Action for Childhood Arrivals (DACA) program – one President Trump said earlier he planned to leave alone — also is being challenged, this time by 10 state attorneys general. An estimated 10,000 immigrant youth in Connecticut could potentially lose their provisional legal status.

A newly proposed immigration policy endorsed by the president is also displeasing Connecticut businesses, since it would dramatically reduce the number of immigrants each year.

All this uncertainty and turmoil is fertile ground for political candidates of every stripe. That means the upcoming midterm elections are likely to be spirited for both parties.