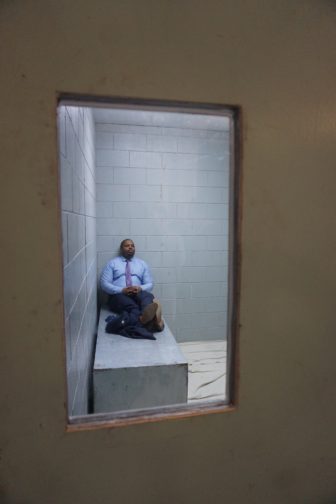 Sen. Gary Winfield in solitary — in a replica of a solitary confinement cell set up in the lobby of the Capitol during the legislative session.

David McGuire, the head of the Connecticut Advisory Committee, said he’s glad the bill has become law, but it’s  a “much more narrow version” of what his panel sought.

“It did not go as far as we had hoped for,” McGuire said.

The Connecticut Advisory Committee to the U.S. Commission on Civil Rights is preparing a final report on its recommendations to the state’s criminal justice system because the 16-member bipartisan panel is concerned blacks and Latinos are overrepresented in solitary confinement in Connecticut.

The bipartisan panel of attorneys, which reports its findings to the U.S. Commission on Civil Rights, is composed of attorneys, academics and others, including former Major League Baseball outfielder Douglas Glanville. In preliminary findings, the panel said “solitary confinement can be particularly harmful for vulnerable people, such as juveniles, young adults, and people with mental illness.”

Solitary confinement is a form of imprisonment in which an inmate is isolated from any human contact, sometimes with the exception of members of prison staff, for 22–24 hours a day, with a sentence ranging from days to decades.

The Connecticut Advisory Committee, which held a hearing in Hartford in February to research the issue, says research and anecdotes show that long-term solitary confinement increases rates of self-harm and suicide among inmates and can lead to mental health issues.

The bill Malloy signed last month address one of the advisory panel’s concerns: Under the new law the state is barred from placing anyone under the age of 18 in solitary confinement.

The law also requires the state to provide detailed information about how many inmates were placed in solitary during the 12 months preceding the date of the report and spent more than 15 days on “administrative segregation” status.

The state’s correctional facilities are required to report this information based on an inmate’s age, gender identity, ethnicity, and mental health status.

The state’s move to end solitary confinement of juveniles comes a year after the Justice Department banned the practice in federal prisons. It was prompted to do so by the suicide of Kalief Browder, a young man who spent two years in solitary in New York’s Rikers Island jail complex after being unjustly accused of a minor crime.

The reason Connecticut state lawmakers did not embrace all of the panel’s recommendations?

“Prisoner rights work is not an easy thing to do,” McGuire said.

McGuire praised Scott Semple, the commissioner of the state Department of Correction, for reducing the number of inmates regularly held in solitary confinement from about 200 a few years ago to about 40 now. That’s out of a population of about 14,000 inmates.

But McGuire said he’d rather have prison reforms written into law “so (policy) doesn’t change at the whim of a future commissioner.”

Semple said a further review of the state’s policy on solitary confinement is ongoing.

“The intent of the original bill was to codify current practices with regards to administrative segregation,” said  Semple.  “However, the agency is in the process of further evaluating the original legislative proposal in hopes of further refining the agencies practices which, as currently constituted, have resulted in one of the lowest levels of administrative segregation in the nation.”

A recent federal inspector general’s report determined isolation can cause anxiety, depression, anger, paranoia and disturbances among prisoners. The report quotes experts who say prisoners who have been housed in solitary are more likely to be repeat offenders and have problems integrating back into their communities.

Updated at 10:30 p.m. with comment from Correction Commissioner Scott Semple.