The Connecticut State Board of Education during their annual retreat

Frustrated that hundreds of teaching positions go unfilled each year because school districts can’t find qualified candidates, the state education department is planning to propose changes in how someone earns a teaching certificate – a move that is sure to rile those at the state’s teacher-preparation colleges and officials of teachers unions.

During the State Board of Education’s annual retreat last week, members were told the department is focusing on paring back existing certification requirements, creating new non-traditional pathways to becoming a teacher, and helping to bring prestige back to the profession.

“This is going to require legislative changes. We are likely to come back to you this fall asking you to endorse legislative proposals. Our certification regulation book is 144 pages long, and a significant amount of the regulations are about how to keep people out. It has disproportionately kept out some of the folks that we need,” State Education Commissioner Dianna Wentzell told the board. “We know we have a challenge, and we look forward to presenting you with some drafts to try and tackle these challenges… We are getting to the point where we are up against the overregulation. We are up against structural barriers.”

The shortage of qualified teachers has meant that thousands of students each year are being taught by long-term substitutes – most of them in the state’s lowest-performing districts.

On Oct. 1, 2014, one month into that school year, 250 teaching positions were unfilled statewide.

The department plans to focus on four teaching areas that districts have struggled for years to fill: bilingual, math, science and special education.

“If the state department takes deliberate action to develop strategies to attract candidates who are ethnically, racially and linguistically diverse and develops new and innovative pathways into the profession, then the diversity of Connecticut’s teaching workforce, and the percentage of educators filling vacancies will increase. That’s our theory, that’s our hypothesis, that’s what we are all driving for,” Sarah Barzee, the education department’s chief talent officer told the board.

“We will not get there with our current educator preparation programs,” she said, adding they are unwilling to develop programs that help produce more teachers in shortage areas. “We have to think about new and innovative ways to do this.”

She also said her conversations with college students studying to become teachers indicates they are largely unaware of which teaching specialties have shortages.

Of particular interest to Estela López, the vice chair of the state board from East Hartford, is filling bilingual teaching vacancies and increasing the number of bilingual teachers so dual-language programs can expand.

Dual-language programs have failed to take off in Connecticut, despite decades of research showing they are that the most effective way to help foreign-speaking students learn English and catch up academically with peers. The programs, which also help English speakers become bilingual, typically put English learners and native-English speakers together in the same classroom and offer instruction in each group’s language for part of the school day.

“Unfortunately, bilingual [instruction] in Connecticut is seen as remedial instead of being seen as an asset,” said Lopez. She has asked the education department to present what it is doing for English learners following a series of articles in The Connecticut Mirrror on the topic. “I do favor dual languages. I do understand that it can be very complicated to make it happen,” she said.

State law does require that students who attend a school where more than 20 students speak the same foreign language be offered instruction in their native language for part of the school day – but only until they understand enough English and can to be placed in a mainstream classroom, or typically for no more than 30 months.

And many don’t find enough.

“That has been the excuse always – it’s hard to find people. Enough,” said Lopez during the retreat.

In 1999-2000, there were 563 teachers working in bilingual classrooms in Connecticut. In the school year that just ended, there were just 227 – a 60 percent drop despite an influx of nearly 17,000 additional English learners during that time. One-third of the openings for bilingual teachers were left empty because no one qualified applied.

The problem will only get worse unless something changes. The education department reported in 2015 that nearly half of all current bilingual teachers will be eligible to retire over the next five years. Meanwhile, the state’s teacher colleges typically graduate only about 30 qualified people each year. The state has cut or eliminated funding for programs that provide alternative, quicker routes to bilingual certification. The lone remaining program providing a non-traditional route to bilingual certification that is run by Area Cooperative Educational Services has produced 25 teachers since 2011. 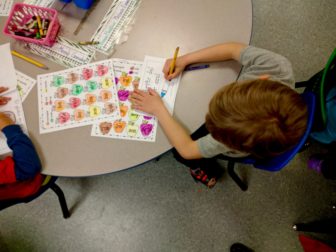 A dual-language student at Silvermine Elementary School in Norwalk

One solution would be to change the state law that requires someone who wants to teach bilingual classes to be certified in both bilingual education and a subject area or early education.

“The cross endorsement needs to be turned off a bit,” Erin D. Benham, a state board of education member from Wallingford and retired teacher from Meriden.

At Lopez’s request, the department plans to report to the state board in October on the obstacles to expanding dual language programs in Connecticut.

State Board Chairman Allan B. Taylor gave a preview of two of the major obstacles, or choke points.

“The choke point is often defended by two different organizations: higher education and teachers unions,” said Taylor, of Hartford. “Are any of them involved in the background work of problem solving, or are we at this alone?”

Teachers union officials and teacher-college leaders came out strongly last winter to oppose a non-traditional route to certifying teachers for certain high-need areas. Their concerns centered on whether teachers would be prepared well enough if certain requirements were scaled back.

Barzee said she has had numerous conversations with higher education about supply and demand, “But unfortunately, they are business enterprises and if the students don’t come, then they will not educate them.”

The Mirror’s exploration of ways to close persistent gaps in educational achievement is supported in part by a grant from the Solutions Journalism Network and the Nellie Mae Foundation. View more of the projects they have funded here. The Connecticut Mirror retains sole editorial control over the content of this coverage.