The specter of nuclear war dwarfed all the other news last week, but President Donald Trump still found time to unleash a tweetstorm on Connecticut Sen. Richard Blumenthal.

The week opened with Trump ranting about the senator’s false claims seven years ago that he served in Vietnam while in the U.S. Marines. Blumenthal, who long ago apologized for the statements and was re-elected twice afterward, is a vocal critic of Trump’s policies and is lead plaintiff in a suit claiming that the president is in violation of the Constitution’s emoluments clause forbidding his receipt of gifts from foreign governments. 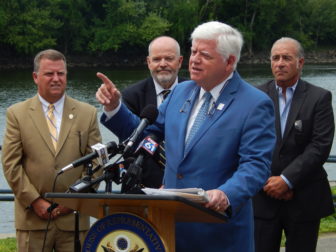 Wednesday, in apparently improvised remarks, Trump declared that North Korean threats against the U.S. “will be met with fire and fury like the world has never seen.” He went on to expand on the issue in tweets, earning a sharp and critical retort from Connecticut’s other U.S. senator, Chris Murphy.

“Trump knew NKorea would be a problem. Yet he intentionally keeps vacant EVERY diplomatic position that is relevant to solving this crisis,” tweeted Murphy, a member of the Senate Foreign Relations Committee.

Thursday Blumenthal was mainly concerned with North Korea’s threat to fire missiles near Guam, saying the U.S. should consider military action if Kim Jong-un follows through. But he also took time to observe that last month’s FBI search of the home of Trump’s former political operative Paul Manafort — one key player in the Russia investigation — is an indicator of “probable cause” of “criminal wrongdoing.”

Trump moved on later in the week, issuing another combative comment on North Korea Friday —  the U.S. military is “locked and loaded” –and also taking a shot at House Speaker Mitch McConnell.

Sen. Charles Grassley, R-Iowa, however, expressed new interest in Blumenthal’s Emoluments Clause suit, observing that it did not include any mention of Trump’s former opponent Hillary Clinton, former secretary of state.

Trump and congressional Democrats have their differences on international policy and politics, but they agree on the need to repair the nation’s aging infrastructure – just not on how to fund it. U.S. Rep. John Larson, D-1st District, on Tuesday said he plans to introduce a 10-year, $1.8 trillion infrastructure package paid for by a tax on emissions of carbon dioxide and other greenhouses gases that result from the burning of gasoline, coal and other fossil fuels.

Back in Connecticut, the complications of not yet having a state budget continued to multiply on both political and operational fronts.

The chief lobbying group for the state’s municipalities – whose budgets have been destabilized by the state’s inaction – announced Monday it is completely opposed to the Democrats’ proposal to raise the state sales tax and impose a 1 percent tax surcharge on restaurant patronage.

The municipalities do appear resigned to the idea that they will be getting less aid collectively.

As it is now, under Gov. Dannel Malloy’s executive budget order, programs are suffering and people are being laid off. Budget or not, the law requires observance of the 17th sales tax-free holiday Aug. 20 to 26. 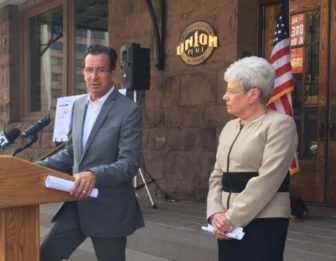 Born of either desperation or inspiration, some state legislators began talking about extracting millions of dollars from Dominion Energy in return for legislation boosting the profitability of electricity generated by the company’s Millstone nuclear power plant.

The legislature’s inability to pass a budget also motivated Senate Republican leader Len Fasano to announce now, rather than after a budget is passed, his intention not to run for governor.

Not having a budget did not seem to be a problem, however, for the launch of a new hourly express bus between Hartford and the University of Connecticut in Storrs.

A new bus line is an easy thing to put in motion, relatively speaking, when compared to addressing an intractable issue like racial balance in schools. On that score, after two decades of discussion, progress has stalled, and the state doesn’t appear to have a plan for moving forward, a judge observed last week.

State education officials do have an idea of how to help fill hundreds of teaching job vacancies they have identified this year, but they are sure to face opposition from teachers’ unions and teaching colleges.