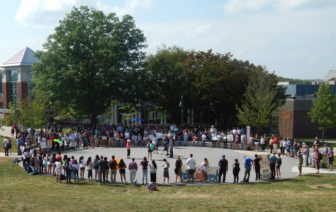 About 200 people gathered in the center of campus at Eastern Connecticut State University Tuesday in support of the DACA program.

Washington – Connecticut on Wednesday joined 14 other states and the District in Columbia in a lawsuit that would invalidate President Donald Trump’s move to end protections from deportation for immigrant youths.

The lawsuit also seeks to keep federal agencies from using personal information about applicants for the Deferred Action for Childhood Arrival, or DACA, program to deport the youths, who call themselves “dreamers.’”

“Connecticut is steadfast in our commitment to protect the over 10,000 DACA-eligible youth in our state against the President’s cruel and misguided decision to rescind the program,” said Gov. Dannel P. Malloy. “We have already invested so much in these Dreamers who have grown up in Connecticut. They’ve been raised and educated in our school systems. They contribute to Connecticut’s economy. They pay taxes. They defend our nation.”

Trump on Tuesday announced a phaseout of the program, which has protected from deportation and provided work permits to about 800,000 youths brought to this country as children by their undocumented parents or came with families who overstayed visas.

The president said no new applications would be accepted for the program, which provided eligible youths with two-year, renewable, provisional legal status.

All existing DACA recipients would be protected until their two-year provisional legal status expires, and those whose permits are facing “near-term expiration” would be allowed to reapply for renewal until Oct. 5.

Trump said he implemented a gradual phaseout of DACA “to provide a window of opportunity for Congress to finally act.”

The Trump administration said “imminent litigation” from the state of Texas and others prompted a review of DACA that concluded the program, established by former President Barack Obama in 2012, was an unconstitutional exercise of authority by the executive branch.

Under DACA, youths born after June 15, 1981, who were brought to the United States before their 16th birthday and have lived in the United States since June 15, 2007, were eligible for a work permit and protection from deportation. Applicants were required to be enrolled in school, have graduated from high school or have served honorably in the military. Those convicted of a felony or certain misdemeanors were barred from the program.

While Texas and a group of  “red” states were ready to sue to try to end DACA, a group of “blue” states, led by New York, is now trying to reinstate it.

Their lawsuit claims Trump’s actions violate the due process rights of immigrants. It also says about 78 percent of DACA recipients are of Mexican origin.

“Ending DACA, whose participants are mostly of Mexican origin, is a culmination
of President’s Trump’s oft-stated commitments — whether personally held, stated to appease some portion of his constituency, or some combination thereof — to punish and disparage people with Mexican roots,” the lawsuit said.

As of the end of March, federal officials had  approved 4,929 initial DACA applications and 5,882 renewals for Connecticut residents, for a total of 10,811.

“The DACA program has allowed these individuals, many of whom are long-term residents of Connecticut, to work legally, acquire driver’s licenses, open bank accounts, access lines of credit, purchase homes and cars, receive in-state tuition at public universities, and obtain employer-based health insurance, among other benefits,” said Connecticut’s portion of the lawsuit, filed by state Attorney General George Jepsen.

The case was filed in the U.S. District Court for the Eastern District of New York.

Meanwhile, congressional Democrats on Wednesday threatened to hold up votes on key legislation this fall if GOP leaders don’t allow a vote on the DREAM Act, legislation that would provide a path to legal status for the nation’s DACA recipients.

“We’re calling on (House Speaker Paul) Ryan and (Senate Majority Leader Mitch) McConnell to immediately put the Dream Act for a vote on the floor in the House and Senate,” Senate Minority Leader Charles Schumer said. “I’m confident that if put on the floor, it will garner overwhelming support from both sides of the aisle.”

But Blumenthal predicted there’s “a good chance” the bill would become law because of “growing bipartisan support” for the dreamers.

“Clearly the president’s decision was heartless and brainless,” ‘he said.