Rancor on top of rancor with some extra rancor

It began with uproar over the past behavior of Republican candidate for U.S. Senate Roy Moore of Alabama, accused of predatory sexual conduct toward women half his age, including a 14-year-old girl. The media frenzy continued all week, intensifying when U.S. Sen. Al Franken of Minnesota was shown in a photo to be groping his sleeping accuser.

Connecticut Sen. Chris Murphy is actively campaigning against Moore, a former judge, by raising $125,000 for his Democratic opponent.  Then on Friday, in an effort to distance themselves from their fellow Democrat, Murphy and his colleague Sen. Richard Blumenthal said they would give away the campaign donations Franken had given them.

Earlier in the week Murphy had some exceptionally harsh words for Donald Trump at an unusual Senate hearing concerning the President’s authority to wage nuclear war without Congressional consent, calling him “unstable” and “Quixotic:”

Democrats throughout Connecticut were energized by the Trump backlash they saw in the previous week’s elections, but were still trying to come to grips with widespread public dissatisfaction with Gov. Dannel Malloy and the legislature’s handling of the state’s finances and economy. The $91 million in holdbacks in municipal aid Malloy imposed Friday didn’t help. 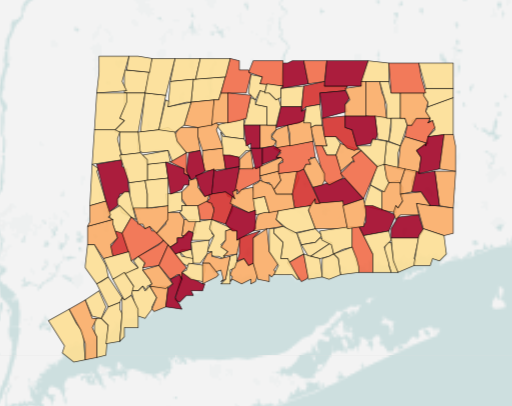 Municipal aid: How does your town fare after the mid-year cut?

The savage nature of today’s politics figured in Democratic Lt. Gov. Nancy Wyman’s decision not to seek the governor’s seat.

The newly approved bipartisan state budget, by the way, is already headed toward a deficit – so much so that it would exhaust the state’s emergency reserves if the projections hold. Legislators were able to fix a piece of technically flawed language in a hospital tax measure designed to capture increased Medicaid reimbursements from the federal government, but so far the U.S. Centers for Medicare and Medicaid Services have not signaled their approval of the tax reimbursement scheme.

And in a state desperate for revenue, it is perhaps not surprising that Connecticut officials are at odds with Foxwoods Resort Casino over whether 100 new e-bingo machines are part of the casino’s revenue-sharing pact with the state.

If state legislators ultimately debate when and how to address the newest financial shortfall, the public will once again be able to watch on CT-N, the state’s public access network, now operated solely by the Office of Legislative Management. That is, of course, unless a bill proposed by one legislator gives it programming independence or puts it entirely out of business.

The network was both inside and outside the State Supreme Court hearing on the lawsuit by parents of slain Sandy Hook Elementary School students against Remington Arms, manufacturers of the assault rifle used in the massacre.

All the while the debate raged over how the Republican Party’s tax-reform package would affect the citizenry. Kevin Sullivan, Connecticut’s Commissioner of Revenue Services, told U.S. Rep. John Larson, D-1st District, that it “could provide some economic stimulus” but also a “huge windfall to the wealthiest federal taxpayers…”

A Senate proposal to end the so-called Obamacare mandate as part of the package got Sen.  Blumenthal’s back up: “As if eliminating money-saving deductions for working families wasn’t vile enough, @SenateGOP now ready to hike premiums and kick millions off insurance. This isn’t #TaxReform – it’s an all-out assault on the middle class,” he tweeted.

(Another part of the GOP tax plan would eliminate a tax credit for historic preservation projects like the Colt complex in Hartford.)

Democratic objections notwithstanding (including those of the Connecticut delegation), the tax package passed the House on a 227-205 pure Republican vote.

Oddly enough, amid all the discord, Connecticut’s Democratic senators were able to team up with some high-power Republicans to introduce a bill intended to improve federal background checks on prospective gun buyers.

The cooperative spirit spread to Anthem Blue Cross & Blue Shield and Hartford Healthcare, who announced a new contract Saturday ending a stalemate in negotiations that had gone on since Oct. 1. Two days earlier, consumer advocates said the rapid consolidation of hospitals, physician groups and clinics in Connecticut had exacerbated the dispute and created an insurance “dead zone” in part of eastern Connecticut.

Correction: Gov. Malloy has ordered $91 million in holdbacks to municipal aid, not $800 as stated in a previous version of this story.