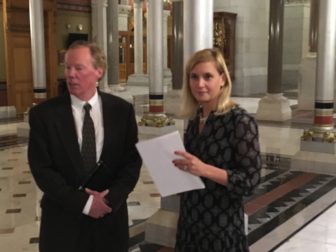 Republican legislative leaders want Gov. Dannel P. Malloy to call them into special session just before Christmas to restore funds for the Medicare Savings Program,  a popular social services program — that won’t face reductions until after the 2018 legislative session starts in February.

Democratic and Republican legislative leaders confirmed they are working to petition themselves into special session only to address the Medicare program. But because of procedural restrictions and scheduling challenges, it remained unclear late Tuesday afternoon whether a late December special session would happen.

“Legislative leaders have reached a bipartisan agreement to adopt changes to the state budget to restore funding in full for the Medicare Savings Program,” the top Republicans in the House and Senate, Themis Klarides of Derby and Len Fasano of North Haven, wrote in a joint statement.

“We believe we should pursue every path possible to schedule a vote on this fix as soon as possible,” the GOP leaders added. “We have recently sent the (Democratic legislative) leaders a suggested letter to Governor Malloy that we are asking them to sign to request that the governor call a special session on December 19, 2017.”

Lawmakers can petition themselves into session, provided they secure signatures from a majority of the House and Senate, 76 and 19 names, respectively.

But because state law requires a 10-day notice period, no session could be held before Dec. 22 — provided sufficient signatures had been filed.

And as Secretary of the State Denise Merrill’s office was closing late Tuesday, House Republicans dropped off petition forms signed by 54 representatives. No petitions from the Senate had been submitted as of late Tuesday.

House Democratic leaders confirmed the bipartisan agreement to restore funds to the Medicare Savings Program through an email they sent to rank-and-file lawmakers Tuesday.

House Democratic Caucus spokesman Larry Perosino said late Tuesday that the caucus wasn’t asking Malloy, for now, to call the legislature into session. “But if the governor calls us in, we will come in,” he said.

Senate Democratic Caucus spokesman Adam Joseph said, “he Senate Democrats are in the process collecting signatures to call the Senate back into session and restore the program well before the deadline.”

Joseph did not say when Senate Democrats hoped to gather.

“Let’s get this straight,” Donnelly said. “Republican leaders have issued a statement to [the] press about a letter they sent to Democratic leaders regarding a proposed letter they may send to the Governor in which they ask him to call them into session — and even if he does, they still won’t act to close the deficit in the bipartisan budget?  And this all has to be done right away?  Do we have that right?”

Malloy, whose administration was excluded from the final negotiations that produced the new, two-year state budget, reported on Nov. 20 — three weeks after its adoption — that it was $203 million in deficit.

Though the budget cuts funds for the Medicare Savings Program, the governor postponed them until late February — several weeks after the lawmakers will have returned to the Capitol for the regular 2018 session — and asked lawmakers to focus on closing the full deficit.

“This is absurd,” Donnelly added. “Republican leaders shouldn’t need the governor’s permission to come in and do the jobs they were elected to do.  Especially when the administration has already delayed changes to the Medicare Savings Program that provide them with the luxury of time to thoughtfully address this particular issue well into the new year.”

The administration still is refining estimates, but earlier projections warned that roughly 86,000 no longer would be eligible for the program and about 27,000 would receive less assistance.