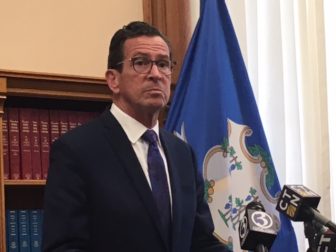 The changes to the Medicare Savings Program, which could affect benefits for as many as 113,000 seniors and disabled, won’t take affect for six more months.

“This isn’t a long bill, and yet it embodies all the bad practices that have imperiled Connecticut’s state budget for decades,” Malloy wrote in a statement. “In terms of budget gimmickry, it shoots the moon: wishful thinking, pushing problems off into the future, and shoddy math – most egregiously in the form of double-counting savings in our already underfunded teachers’ pension system.”

House Speaker Joe Aresimowicz, D-Berlin, responded Friday that “There is unified bipartisan consensus among the Democratic and Republican caucuses in the legislature on preserving eligibility levels for the Medicare Savings Program, albeit a different approach and perspective than the Governor. Despite a veto threat, I expect we will move forward Monday to ensure those affected can continue to rely on this important program.”

“Governor Malloy needs to stop letting his partisan politics stand in the way of a responsible, bipartisan plan to give thousands of seniors and disabled individuals the peace of mind they deserve,” said Senate Republican leader Len Fasano of North Haven. “He has spent seven years destroying our state. We cannot look to him for leadership.”

Fasano added that “Despite the governor’s best efforts to try to stop us, lawmakers will be convening on Monday to pass this bill. If Governor Malloy wants to veto it, just like he threatened with the bipartisan budget, he can have at it. But lawmakers have the power to override his veto and do what is right for the thousands of seniors who need lawmakers to take action.”

“We understand how profoundly difficult it must be for Senator Fasano to finally vote for a budget after all these years, only to realize it was almost immediately out of balance, just as the governor had warned,” Malloy spokeswoman Kelly Donnelly responded.  We know he’s struggling with that fact.  You might say it’s Senator Fasano’s ‘new emotional reality.’  But despite how hard this is for him, and despite how little he wants to face facts, the bill he wants to run on Monday will only exacerbate the deficit in his budget.”

“We have much work ahead of us, and this message from the governor does nothing to improve the prospects of working together with the executive branch,” Klarides added.

“We also agree that it is critically important that we continue our bipartisan work on a deficit mitigation package to bring the budget back into balance,” Looney said. “That’s why I am calling on the legislative leaders to reconvene negotiations following the release of the January 15 consensus revenue report.”

The leaders are recommending several budget adjustments for approval Monday to free up the $54 million needed to reverse new eligibility restrictions the General Assembly ordered this year to the Medicare Savings Program.

This program uses Medicaid funds to pay medical expenses that Medicare doesn’t cover for poor seniors and the disabled.

Malloy already has said he would defer implementing the new eligibility rules, which were supposed to begin on Jan. 1, until July 1.

Their plan to find an extra $54 million for the Medicare Savings Program this fiscal year, though, creates several problems.

It would cancel a previously ordered transfer of $17.8 million from this fiscal year to the next. But state finances next fiscal year already are at risk of deficit. A Nov. 13 forecast warned revenues in 2018-19 probably would be about $150 million less than originally anticipated.

It also would reduce the state’s contribution this fiscal year to the teachers’ pension fund by $19.4 million. But the budget already assumes the state will save $19.4 million in this area because it increases what teachers must set aside for their pensions.

The final $17.3 million earmarked in the bill to reverse cutbacks to the health care program would come from reductions to accounts for executive appointments, miscellaneous agency expenses and from the Department of Administrative Services.

The administration also has questioned whether these cutbacks can be achieved in the remaining six months of the fiscal year, since the new budget already has forced major cutbacks in these areas.

That’s because the legislature directed Malloy to achieve more than $872 million in savings after the budget was in force. This already has led agencies to cut back significantly on hiring and spending from “other expenses” accounts.

“Ironically, this (budget adjustment bill) is supposedly being done to justify delaying changes to the Medicare Savings Plan until July 1, something my administration has already done through executive action,” Malloy added. “The bottom line is that this is posturing at best and bad budgeting at worst, and if it comes to my desk in its current form, I will veto it. Connecticut’s elected officials can and should do better.”

The House and Senate both are scheduled to convene at 10:30 a.m. Monday to act on the proposed budget adjustment bill.