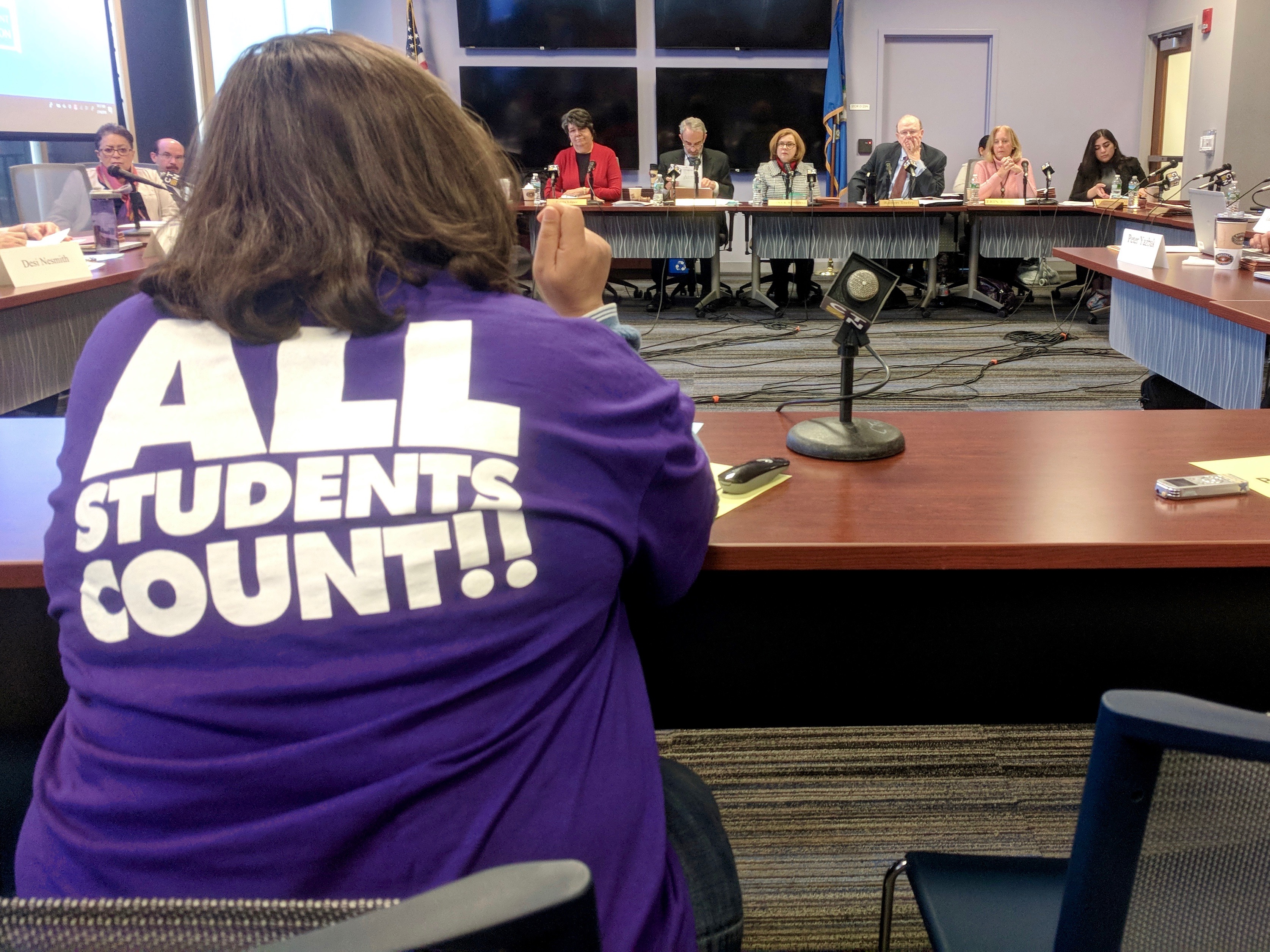 Milly Arciniegas, executive director of the Hartford Parents University, addressed the State Board of Education Wednesday.

For teachers, superintendents and union leaders from traditional public schools, swallowing the multi-million in cuts in state education aid this school year was hard enough.

Then Hurricane Maria raked through Puerto Rico and no additional state funding was made available to help the mostly urban, low-income districts grappling with an influx of nearly 2,000 students fleeing the storm’s aftermath.

Then, in October, the legislature approved a budget that provided charter schools an additional $613,500 for the current school year. That was on top of the $6.3 million increase charter schools were already getting in the temporary budget the governor implemented as the General Assembly struggled to approve its own.

Adding insult to injury for the public school advocates, the legislature’s two-year budget next year will send charter schools another $7.1 million. It will increase charter school enrollment and pay for an additional $250 (on top of the current $11,000 per student they receive) for each student the charters enroll.

So Wednesday that built-up frustration boiled over before the State Board of Education when it considered a request by the leader of the state Senate that it send the additional $613,500 the budget provided to charter schools so they could enroll an additional 57 students. The 57 seats would be in addition to the 504 seats the board had already approved for the school year.

“I am trying to compare which students we value and which ones we… ” Estela López, vice chair of the board said, shrugging her shoulders and shaking her head in disapproval.

An additional 1,846 students affected by the hurricane are attending schools in Connecticut; including 373 students in Hartford, 274 in Waterbury and 209 in New Britain. The governor’s proposed budget for next school year does not provide additional aid for these students, or count them into the state’s main education funding formula, the Education Cost Sharing grant.

The board voted heavily against the charter school increase, with only the longtime chairman of the board supporting the increase.

The vote wasn’t as much a rejection of the legislature’s approval of more funding for the schools as it was a concern that the three charter schools seeking increases had enrolled more students than the board told them last July would be funded. The increase in enrollment had come months before the legislature finally adopted a budget the governor would sign. That final budget was approved in late October and included funding for the 57 additional seats. The Republican budget approved in September but vetoed by the governor did not include these additional seats; nor did the Democrats’ budget that was rejected by the legislature in September.

“They intentionally went over the [number of] seats,” said López. “We believe that all children are equally valued in Connecticut. … We should not be approving additional funding for one group over another.”

It was unacceptable to board member Joseph Vrabely Jr. that these charter schools decided to enroll students with the assumption that money would follow since the students are already enrolled. “… and then you are going to make the board feel bad?” he asked. “But you shouldn’t have approved them to begin with. We reward the school for not following the rules?”

“It’s a thumb in your nose,” fellow board member Donald F. Harris said.

Board Chairman Allan B. Taylor, an attorney, told the board that how much money is provided for charter schools is a decision within the legislature’s jurisdiction – not the board’s.

“Some schools decided to roll the dice and won in the legislature. I don’t know why we would punish them for that foresight,” he said.

Senate President Pro Tempore Martin Looney, D-New Haven, had written to the state Education Commissioner Dianna Wentzell in January asking that the funding be released for the additional seats. He was not available Wednesday afternoon to comment on the board’s action and the reason the legislature decided to provide the additional charter school funding.

This is not the first time there has been controversy over charter schools offering students seats without first securing the necessary funding. In 2015, legislators were bombarded with television advertisements and emails by charter school groups telling them how the additional students they had already enrolled – but have not received funding for – would be affected if the legislature didn’t provide the funding. 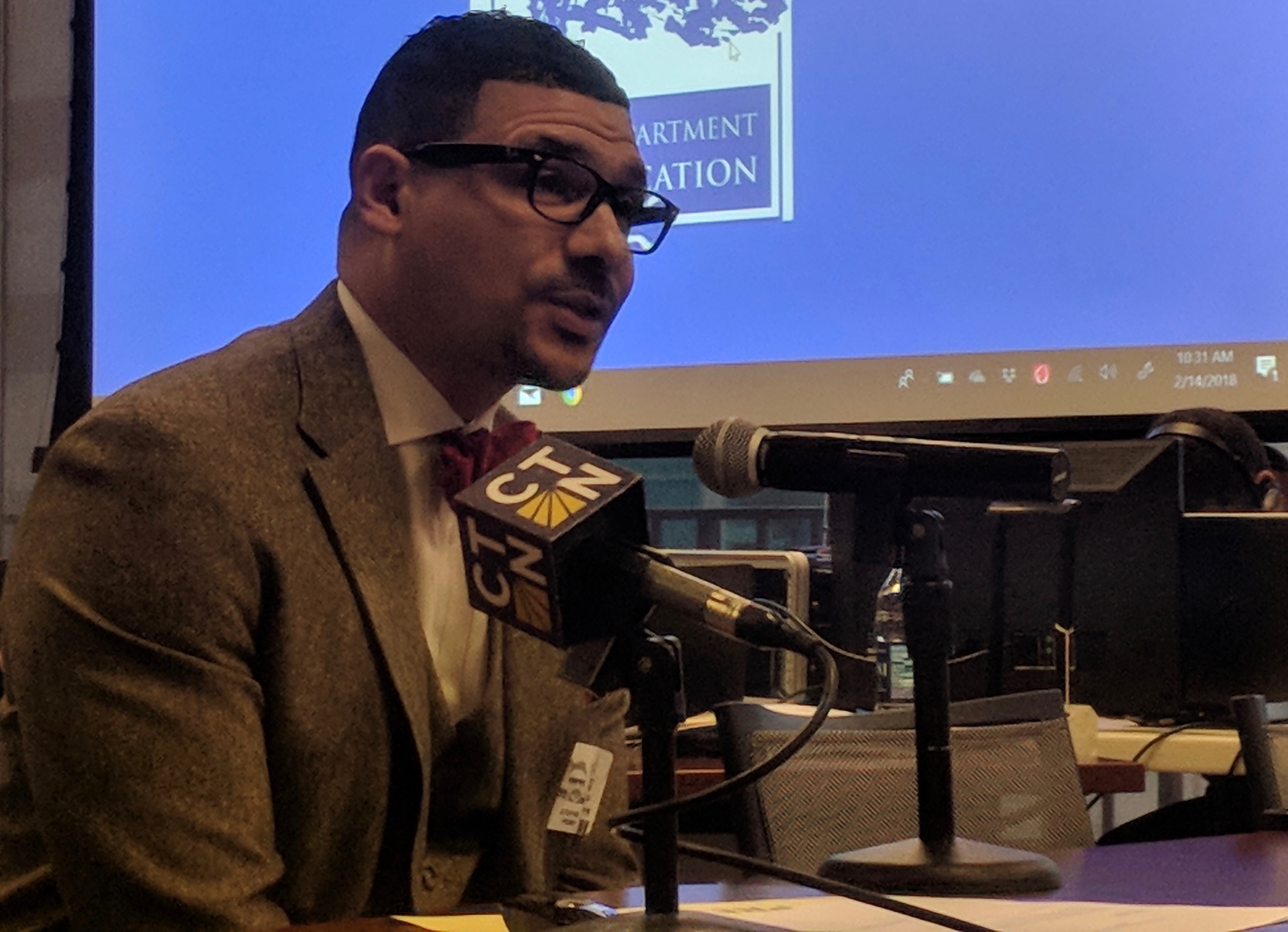 Steve Perry, the founder of Capital Harbor Prep in Bridgeport, said that the decision to enroll 195 more students this year (instead of the 154 the state board had approved funding for in July) was appropriate and practical.

Four years ago, the state education board gave Perry’s proposed charter school in Bridgeport their approval,  though funding would still need to be provided by the legislature for the school to open. Likewise, additional funding in future years would be needed for the school to increase enrollment as slated in the plan.

Perry said he just enrolled the students that the 2014 plan called for, calling the smaller amount appropriated by the board and in various versions of the state budget a “clerical error.”

“We took the children anyway. They [board members] righted a wrong,” he said, anticipating the board’s approval. “Where does the number come from? The approved charter.”

Wentzell said there was no clerical error. Rather, she said, the July appropriation was based on the governor’s executive order that effectively acted as the state budget until one was adopted at the end of October.

In 2015, legislators grew so frustrated with Perry’s highway billboard campaign instructing parents how to apply for his charter school (even though state funding had not been approved), they changed state law to make clear that the education board’s approval of charter plans is preliminary and funding decisions are for the legislature to make.

“When people come to meet with me, they act as if these schools have been approved. But in fact, they are proposed,” said state Sen. Beth Bye, the co-chairwoman of the legislature’s powerful budget-writing committee at the time. The legislature went on to provide the funding and the school opened as planned.

Perry said Wednesday there are also practical reasons to explain why his Bridgeport school enrolled more students than the number approved in the July.

Given that the state budget was adopted months after the start of the school year, school officials had to make decisions in the spring on how many teachers to hire and how many seats to award in July from the lottery, he said.

He said that even before the school ran the lottery there was commitment from the state  that the funding would be there to enroll the 195 additional students.

“These are students who are already living and breathing in the school. They are already there,” he said, adding that recruiting teachers has to start in the winter and spring. “You can’t wait until August to hire teachers.”

Officials from the New Haven charter school that over-enrolled offered a different reason.

There are three charter schools within the Achievement First charter school district in the city that serve students up until grade 8, and one high school students have been promised they can matriculate to.

Typically, about 5 percent of roughly 230 eighth graders don’t go on to attend Amistad High School, which means the 200 or so ninth-grade seats that the school historically has received funding for is sufficient.

But this year more students decided to go on to Amistad, and so the school’s funding was  misaligned with the state appropriation – by 20 students.

“These are not new kids to Achievement First,” said Morgan Barth, the school’s principal. He is also a former official at the state education department overseeing school improvement efforts.

He said that knowing how many students will actually show up is complicated and  difficult to predict. He said it would not be possible to be conservative and offer fewer new students a seat since his school’s enrollment comes 100 percent from the feeder schools, and they have promised these students a seat in their high school.

Asked for a response after the board rejected the additional funding, Perry said, “We’re going to keep educating the kids.” 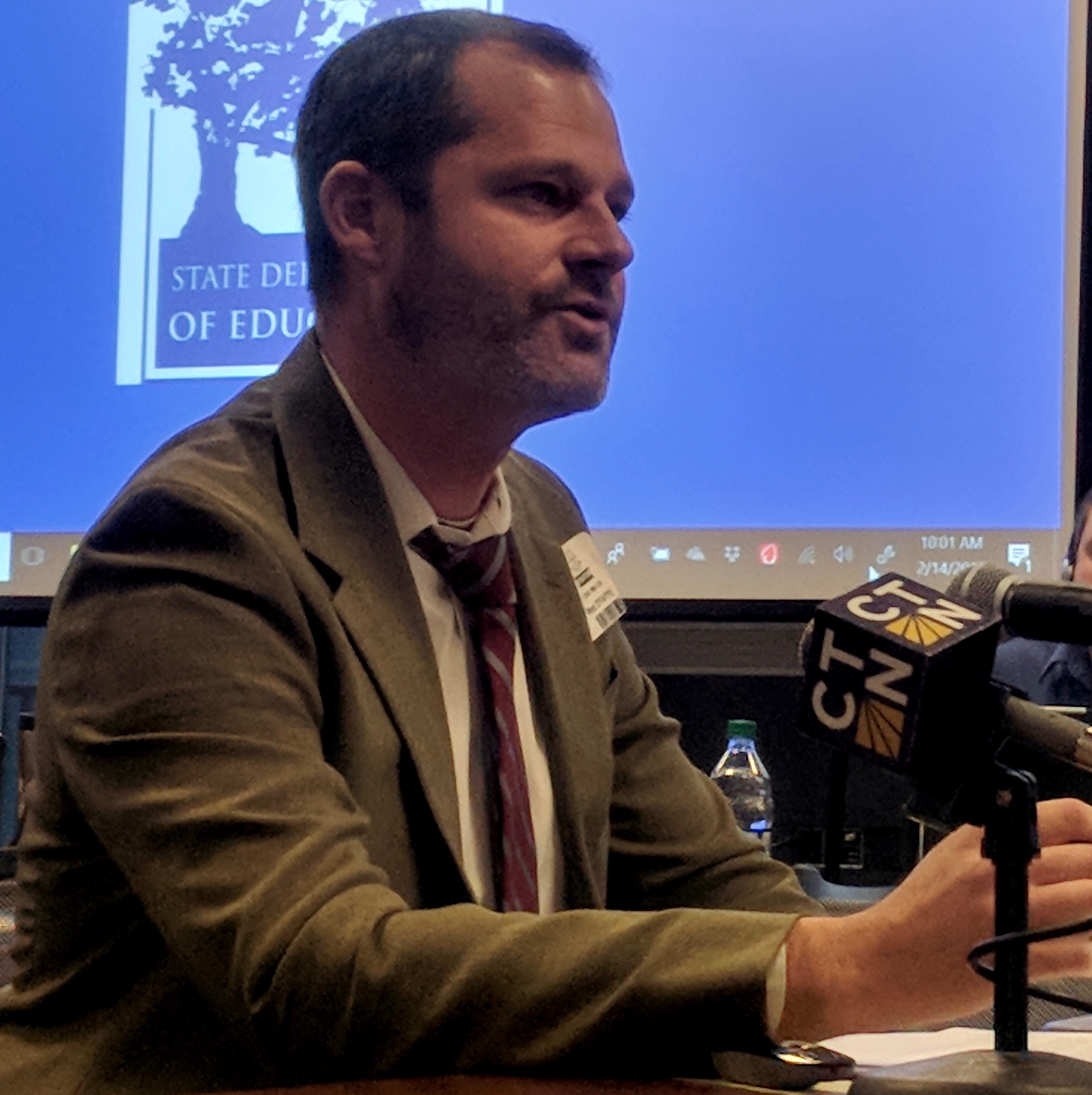 About a dozen educators from public school districts were opposed to the additional charter school funding.

“This is a reckless choice when citizens are not being supported,” said Michael Brosnan, who mentors and supervises new teachers in Bridgeport. He went on to list all the cuts his district has had to make — from not hiring teachers for vacant positions  to students having to walk two miles to school because of cuts in the number of bus passes.

“Everyone here is fighting for funding, but there are families that come from Puerto Rico that are in our schools some of our districts that have not been attended to by the state,” said Milly Arciniegas, executive director of the Hartford Parents University. “You keep asking these [public school] districts to look within their budgets to accommodate the needs of these families.”

The legislature is currently in session to consider making revisions to the two-year budget that it approved last year. It must close a deficit in excess of $200 million for next year. With charter schools slated to get another increase – and many public school districts slated for funding cutbacks – the charter vs. public school funding debate is not likely to abate.

Board Vice Chair Lopez acknowledged that funding decisions are not for the board to make, but said there is a time to stand up to something that is not right.

“We may not have the authority, but we do have a symbolic authority,” she said.

It’s unclear whether the legislature will explicitly order the allocation of the additional funding the state board rejected Wednesday. The state education board does not have the authority to redirect it to another area of the department’s budget without legislative approval.

During the last recession, schools in the state shed 1,300 jobs. A larger economic slowdown is predicted this time.