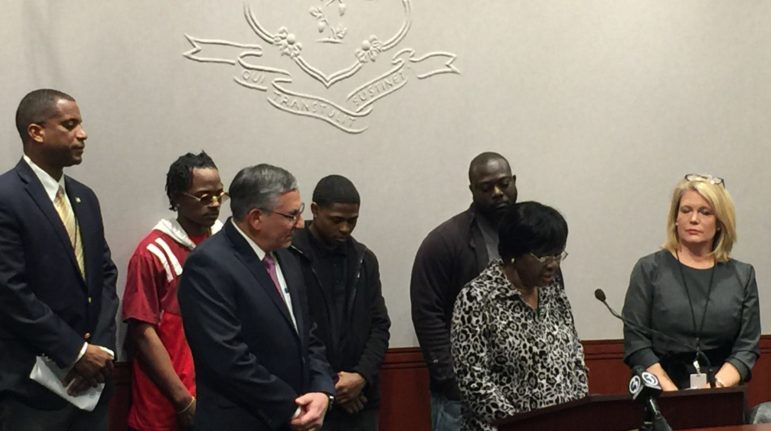 Carrie World, the mother of an inmate suing the state for allegedly failing to properly diagnose his cancer for years, calls for more transparency and oversight in prison health care.

“Today we are asking lawmakers in this building to call for a public hearing in front of the Public Health Committee, to have full transparency with respect to the health care in our prison system,” said Senate Republican leader Len Fasano, who was joined by Sen. Heather Somers, R-Groton, and Sen. George Logan, R-Ansonia, during a press conference at the State Capitol complex Wednesday. Somers is the Senate Republican co-chair of the Public Health Committee and Logan is a vice-chair.

Fasano, of North Haven, called for the release of a report that could offer insight into specific problems in the prison system.

“In particular there was a report done by the Department of Correction in which it reviewed the 25 cases, including eight deaths, related to the health care — eight deaths of prisoners in our custody. The DOC has not provided the report. The commissioner, I’ve talked to him on the phone — he was kind enough to give me a letter to indicate that there’s attorney-client privilege.”

That report, which cost $63,000, is one of two outside assessments of prison health care sought by Correction Commissioner Scott Semple. Because the report might reveal the department’s legal strategy in future litigation, the report’s entire contents are exempt from public disclosure, Semple has said.

The Mirror reported earlier this month on the limited outside oversight over health care for inmates.

Fasano was joined at the podium by the mother of an inmate, Wayne World, who is suing the state, saying it failed diagnose and properly treat his skin cancer, which has since spread, for more than three years after he began complaining of a rash in 2012.

“Wayne wears inmate number 277511, and he has been in jail since 2006 on a manslaughter conviction,” said Carrie World. “Wallace and I raised Wayne to face the consequences of his actions,” she said, referring to her late husband, “but in serving his time, Wayne may have been given a second sentence of inadequate medical care that could cost him his life.”

Fasano made clear he wasn’t putting the blame on Semple. “I have a great deal of respect for Commissioner Semple. I think he’s a great guy. I think that these issues were not necessarily his issues.”

Fasano blamed a “no-bid contract” arrangement with UConn Health, which has provided prison health care for years. Last month the state announced it was shifting management of correctional health from UConn Health to the Department of Correction in July, motivated primarily by findings of a consultant’s report released Tuesday.

Fasano said he thought the power to waive the confidentiality of the report probably was the governor’s rather than the commissioner’s.

Either way, Fasano said, ” someone has to stand in front of this committee, have the guts to stand up and say, ‘I am not going to release this report, I’m invoking attorney client privilege and you’re never going to know the […] truth of what’s happening to the prison inmate health care’.

“And I’m gonna say that I think that a mom has a right to know what is going on, and every mother and every son and every daughter of every prisoner in our system needs to know that right of what’s happening to their loved one.”

Gov. Dannel P. Malloy, when asked whether he’d consider waiving the confidentiality of the document, told reporters, “I’m not gonna waive anything that I’m not fully briefed on. A while ago the commissioner brought his concerns to me about health care. It’s led to a number of things that we’re doing at corrections and he’s doing in particular and we’re in the process of moving from one system to another and I have a lot of faith in the commissioner and his ability to get that job done.”