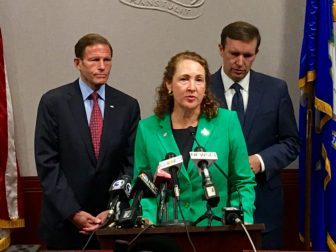 Washington – Republicans on Friday called on Rep. Elizabeth Esty to resign over her handling of a former chief-of-staff accused of abusive behavior, while the Democratic congresswoman sought damage control within her own party.

In a letter to Democratic colleagues obtained by the Connecticut Mirror, Esty said she was sure many had seen reports of how she handled – and some say mishandled – the termination of Tony Baker, her former chief of staff who had been accused of harassment, threatening behavior and physical abuse.

“I can’t rewrite the past – but I can help right the future,” Esty said in her “dear colleague” letter.

She said that she was sharing her story “with hopes that, by speaking out about this and spreading awareness, we can prevent similar incidents from occurring in the future.”

“None of our staff deserve to be harassed or treated with disrespect as some of my staff were,” she said.

Meanwhile, the National Republican Campaign Committee on Friday called on Esty to resign.

“Elizabeth Esty orchestrated one of the most disturbing Washington cover-ups in recent memory. There is no place for someone who protects abusers in Congress, and she should resign immediately,” said NRCC spokesman Chris Martin. 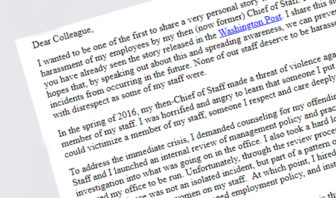 Earlier in the day Santos had said it was up to the voters in November to decide. But he said after more details of the case came to light, he decided he should call for her resignation, especially since Esty had remained silent even as she supported legislation aimed at reforming the way Congress deals with workplace harassment.

“She admitted that things were bad in Congress, but she said she had no control over what happened in her office,” Santos said.

J.R. Romano, the head of the Connecticut Republican Party, is also calling for Esty’s resignation.

“Although you can’t control the behavior of your staff, what you can control is how your respond to it,” Romano said.

Former state Rep. Dan Carter, a Republican who lost a race against Sen. Richard Blumenthal in 2016, said he’s received a number of phone calls and messages from people urging him to challenge Esty.

“It’s nice that people are turning to me as a credible candidate,” Carter said. He added that he’s seriously considering the run, but needs more time to make a decision.

In a statement released Friday afternoon, Esty said she has no intention of leaving Congress over the issue.

“For those who have asked, I want to be clear that I am not resigning, that I have important work to do in Congress including building on the lessons of this horrible series of events,” Esty said. ”  My agenda going forward will include relentlessly pursuing specific actions to foster a better working environment on Capitol Hill…”

Esty said she was made aware of Baker’s abusive behavior after an after-work Cinco de Mayo party in 2016.

That included Baker’s sending fellow Esty staffer Anna Kain, who had dated Baker, 50 messages and texts on her phone that evening, including one that said “You better f—–g reply to me or I will f—–g kill you.”

But Esty did not dismiss him from her staff for another three months.

But she’s been criticized for giving Baker a $5,000 severance payment – money Esty says she will now give back to the U.S. Treasury from her own pocket. She also gave Baker a job recommendation, which the congresswoman said was part of the legal termination agreement.

Baker has not responded to several calls for comment.

In her letter to colleagues, Esty said that through her investigation of Baker’s conduct “I learned that threat of violence was not an isolated incident, but part of a pattern of behavior that victimized many of the women on my staff.”

She said she hired a new chief of staff, made changes to senior staff, changed employment policies, and instituted mandatory harassment training.

But there are still questions about why Esty did not know of her chief-of-staff’s behavior before the Cinco de Mayo party, why she signed a non-disclosure agreement about Baker’s termination, and why she gave him a job recommendation, which helped Baker secure a job in Ohio with Sandy Hook Promise, a gun control group established after the Newtown school shooting.

Esty told the Connecticut Mirror that she told Baker she would not give him a recommendation to a job in Washington or to one that would put him in a supervisory position.

A spokesman for the House Ethics Committee on Friday would not comment on whether an investigation has been opened into Esty’s handling of the matter.

The Ethics Committee is investigating a matter that involves an abusive former chief-of-staff in the in the office of Rep. Mark Meadows, R-N.C.

According to the Office of Congressional Ethics,  Meadows kept his former chief of staff, Kenny West, on the House payroll through August 15, 2015 — even though West was not actually working in the office or performing his duties after April of that year.

West had been accused of sexual harassment or “creeping out” multiple women on Meadows’ staff. The women thought West had been fired by Meadows and were shocked to find him still on the payroll.

The U.S. House of Representatives in February passed a bill that would reform the Congressional Accountability Act, which set up the arduous process for handling sexual harassment and other workplace complaints on Capitol Hill. The bill would hold lawmakers personally liable for paying settlements.

But the Senate has not acted on the bill. Esty’s handling of the Baker case may turn up the pressure for the Senate to act, and for other workplace safeguards to be considered in Congress.

The office of House Minority Leader Rep. Nancy Pelosi, D-Calif., did not return requests for comment on how Esty handled Baker’s firing.

“There’s no place for this behavior in the House of Representatives which is why we passed this year an overhaul of the way Congress deals with harassment,” she said.

Fellow Connecticut Democrats came to Esty’s defense Friday, even as they said she mishandled the situation.

“This clearly wasn’t handled the way it should have been,” said Sen. Chris Murphy, D-Conn. “I talked to Elizabeth, and I’m glad she acknowledges this. Nobody working in a congressional office or any other setting should feel afraid to come to work.”

Murphy also said “protecting victims of workplace harassment needs to come first, and the rules of Congress need to change to ensure that happens.”

“As she has said, she wishes she had handled this situation differently and is making changes in her office,” DeLauro said. “This story is heartbreaking. People should be safe from harm everywhere they go — especially at their workplace.”

“Congresswoman Esty said that she should have handled this situation differently and I agree,” he said. “There is absolutely no place for sexual harassment or abusive behavior in the workplace — whether that be the halls of Congress, state houses, or the White House. Every woman –every person– deserves to feel safe in their places of employment.”