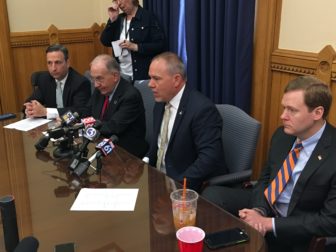 The new proposals from Democratic leadership would:

Equally important, the latest Democratic proposal does not reverse plans to cancel state-sponsored health insurance for about 13,500 poor adults under the state’s Husky A Medicaid plan. This cut is expected to prompt an angry backlash from the party’s urban base.

House and Senate Democratic leaders also appealed to their Republican counterparts to abandon their plans to try to force a vote on a GOP budget as early as Monday in the Senate.

“This is all about time management right now,” House Majority Leader Matt Ritter, D-Hartford, said Monday morning, with the session less than three days from its mandatory adjournment at midnight on Wednesday. “So for anyone to go and run a budget that squeaks through by one vote — or however it’s going to be — it’s never going to become law. So stop the foolishness. Let’s get together, we’re very close, and get the numbers done.”

Senate Republican leader Len Fasano filed the most recent GOP budget proposal as an amendment to several bills on the Senate calendar. Fasano said Friday he would consider calling that amendment as early as Monday if he felt bipartisan budget talks weren’t making sufficient progress.

“We should keep this bipartisan because it has been bipartisan so far,” said Senate Majority Leader Bob Duff, D-Norwalk.

Based on the last spending proposals released publicly by both parties, their respective General Fund expenditures for the next fiscal year are relatively close. The Democratic plan spends about $80 million more, a difference of less than one-half of 1 percent.

One year ago, a GOP-sponsored budget drew modest Democratic support in the Senate and House during mid-September votes. But Gov. Dannel P. Malloy vetoed that plan.

Ultimately both parties struck a bipartisan compromise on a new two-year budget in October.

What they are working on now are adjustments to that plan.

And if an agreement is not reached before Wednesday’s adjournment, Ritter said, changes both parties want to make, including more aid for social services and for municipalities, is at risk.

Unlike last year, “there is not the votes for the Republican budget in the House,” Speaker Joe Aresimowicz, D-Berlin.

But could some of the Democratic leaders’ most recent proposals weaken support within their own party for a budget plan? Lawmakers from urban centers have pressed hard to reverse planned cuts to the Husky A health care program for poor adults.

With about $12 million in extra spending next year, the legislature could prevent the removal of 13,500 poor adults from the program. These are individuals that earn between 155 percent and 138 percent of the federal poverty level.

The 138 percent threshold represents a maximum of $28,676 for a family of three. 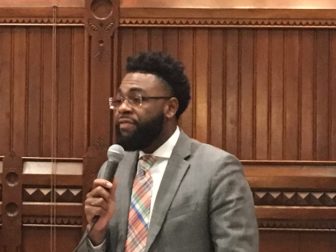 Restoring those funds is “a huge priority for me,” said Rep. Brandon McGee, D-Hartford. The Black and Puerto Rican Caucus and other segments of the House and Senate Democratic caucuses also are backing restoration.

Sheldon V. Toubman, an attorney with the New Haven Legal Assistance Association, said during a rally this past weekend that when lawmakers tightened Husky eligibility two years ago, about 80 percent of those who lost coverage could not afford to buy their own insurance on the state exchange. What happens when the eligibility threshold is lowered again?

Some lawmakers from urban centers said this should be a higher priority than restoring municipal aid for wealthy towns.

But Senate Democratic leaders said that might be the price of achieving a bipartisan deal.

“If we were able to do this in a vacuum with Democratic votes, no question, Husky A would be restored,” said Senate President Pro Tem Martin M. Looney, D-New Haven.

Aresimowicz added that talks about reversing the Husky cuts have not ended, even though the funding is not in the latest budget proposal from either party.

“That’s something that’s going to come up at the table,” he said. “There’s an overall goal to fix it.”

“Any concern about not having the money to restore this essential program does not make sense to advocates,” Toubman said Monday, noting the $12 million to fix Husky is much less than the $90 million cost of reversing cuts to the Medicare Savings Program, which social service advocates also support.