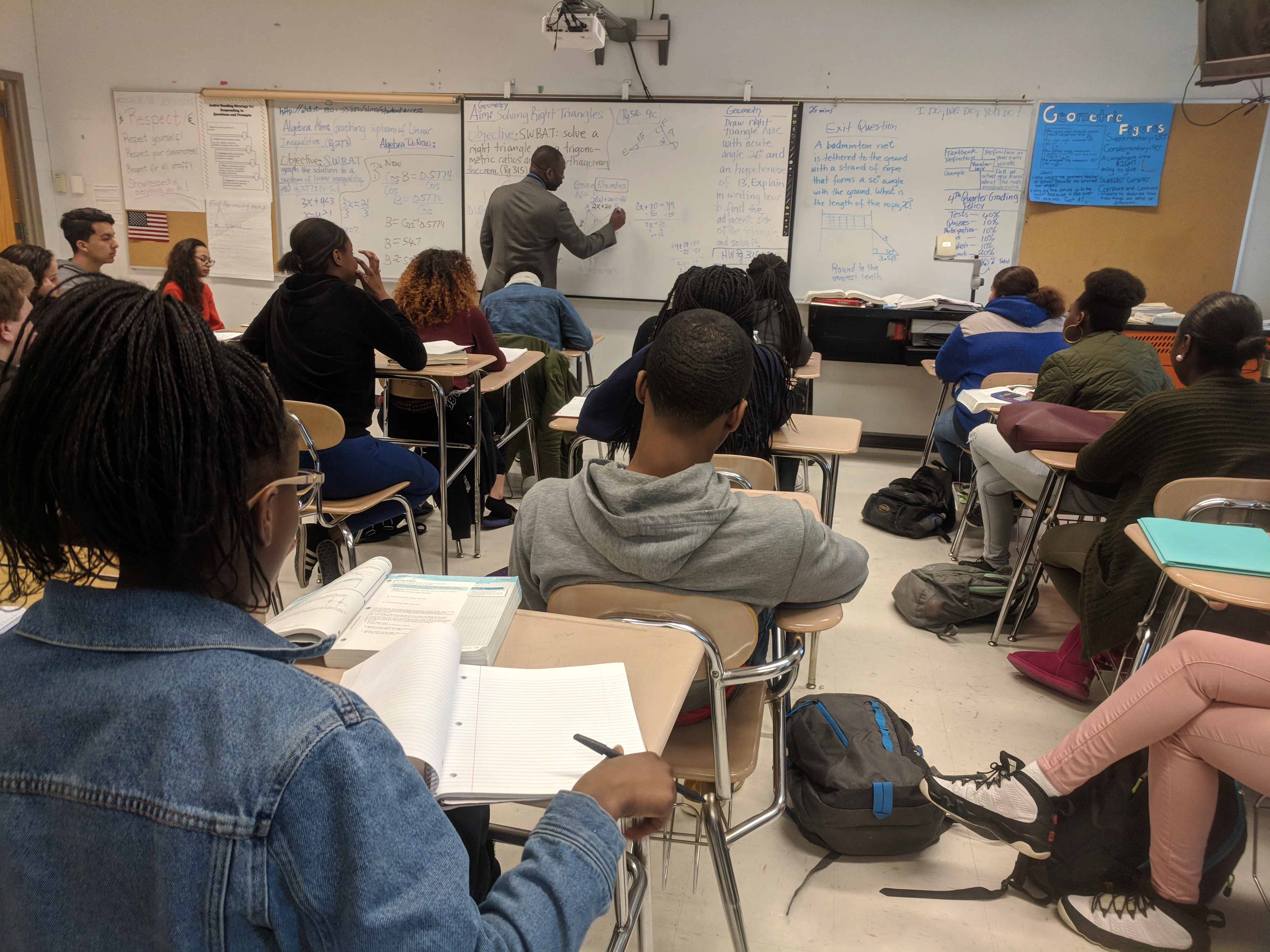 “What are you trying to do to us,” the local officials asked Commissioner Dianna Wentzell.

The letters were aimed at increasing enrollment in Advanced Placement (AP) or International Baccalaureate (IB) courses by students who might otherwise be overlooked as candidates, particularly those from low-income families. The pushback came from school officials who said they didn’t have enough seats in these challenging courses or disagreed over whether many of these students could succeed.

Despite the resistance, enrollment has increased in Advanced Placement courses – though low-income students still are significantly underrepresented. Of the additional 3,400 high school students to enroll in an additional AP course over the last three years, 24 percent came from low-income families, though such students account for 36 percent of Connecticut’s high school-aged population.

Statewide, one in 10 students from low-income families will take an AP course, compared to one in four students from middle- or high-income homes. The increases in AP enrollment have done little to close these large disparities. And the gains that have been made among historically overlooked students have been concentrated in a handful of school districts, state data show.

Participation in the College Board’s Advanced Placement courses gives the best picture of student access to high-level courses and are much more common throughout the state than other college-level offerings.

Twenty-one percent of Connecticut high school students take at least one AP course. Only 2 percent are in other special programs for gifted students, and a half percent take an International Baccalaureate course, which also enable students to earn college credit.

The State Department of Education was only able to provide data on students who take the College Board’s Advanced Placement courses and their outcomes.

The letters the state sends home also are meant to embolden parents to nudge their districts to enroll more students in advanced courses, but the decision ultimately depends on how many high-level courses are offered and whether guidance counselors and other school leaders are on board.

In Bridgeport – the state’s second largest school district – leadership in the past was not on board and cut in half the number of available AP courses – down to seven districtwide. With fewer offerings, only 198 of the district’s 5,352 high school students took at least one AP course last school year – putting Bridgeport’s participation rate in AP courses dead last among Connecticut districts. In addition, 349 Bridgeport students were enrolled in IB courses, 140 in UConn’s early college courses and none in gifted programs. Fewer than 100 were enrolled in a community college program. 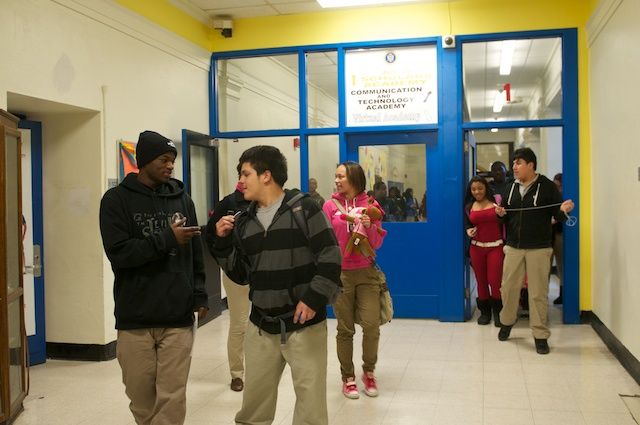 A magnet high school in Bridgeport.

“The electives and AP courses were almost entirely wiped out. It was a terrible decision, just terrible. I don’t think the public knew this was going on at the time,” said Fran Rabinowitz, who served as the city’s superintendent in the aftermath of the major reduction in course offerings. “It is incredibly important that we tap the potential of every student. It is important for students to be in those courses.”

The state education department says such local decisions are at the heart of creating the disparities between who can and cannot take advanced courses.

“We have looked at this data. [These courses] are not equally available,” Ajit Gopalakrishnan, the leader of the State Department of Education’s performance office, told the State Board of Education in April. “It is not even, and some of that is driven by the communities.

“There are a lot of local dynamics that come into play on what their course offerings are,” he said.

To provide another nudge, the state education department two years ago began factoring participation in college and career-ready courses into the zero-to-100 grade that the state gives annually to each school and district. Four percent of the grade is based on enrollment levels in advanced courses, with an expectation that at least three-quarters of high school juniors or seniors will be enrolled in at least one.

“We want our students graduating academically ready for what’s next,” Gopalakrishnan told the State Board of Education recently. “Our putting this in the accountability system and making it more visible has pushed the conversation, most definitely to, ‘What are we doing?’… Some districts are realizing they didn’t have what they needed to expose it to all students.”

‘We had to do something different’

There is no shortage of demand for access to more challenging courses in many districts.

“Students eat up these courses when they are offered,” said Brian Boecherer, the director of UConn’s early college program.

His research looking at early college courses in districts with the highest concentrations of low-income students show they are near or at capacity while better-off districts have more teachers certified to offer the courses, and therefore more room to increase enrollment if school leaders choose. Boecherer has been working to get more high school teachers from high-poverty districts to teach UConn’s college-level offerings, but districts don’t give teachers financial assistance to get the needed certification and the program is able to offer scholarships to only one or two teachers a year.

Even in districts that have increased access to AP courses, the number of available seats does not always keep up with demand.

In New Haven, that was the case this school year.

“Many students are disappointed and upset to find that they are unable to take AP and honors classes this year because they are at max capacity,” Makayla Dawkins, the city’s student school board member, told the board during its first meeting of this school year. “I was actually taken out of my AP government class because there were 30 of us with one teacher in one room.”

School officials have been working hard to offer enough seats for those they believe have the potential to do well.

This year, his school began offering a Spanish literature course and next year hopes to start computer science.

Enrollment in AP courses has grown faster in New Haven than in any other Connecticut district, state data show. The district also has managed to nearly close the disparity in who enrolls, with about one in three high school juniors and seniors – regardless of whether they come from a low-income or a better-off family – participating in at least one Advanced Placement course.

New Haven is one of the few Connecticut districts responsible for driving the increased enrollment of students from low-income families in AP courses. A review of state data by The Connecticut Mirror shows that only seven districts saw an increase of a least 40 low-income students over the last three school years.

Give Me An “A”! Give Me A “P”!
Hillhouse High School celebrates students’ academic achievements

Having faith in these once-overlooked AP students has become something of a culture in New Haven, a district with a large concentration of students from low-income families. When Glen Worthy became the principal of Hillhouse two years ago, he says he was struck by how few black males were in AP courses.

“I knew we had to do something different,” he said.

That included promoting the benefits of these courses to parents and students.

This winter the school held its first awards ceremony to celebrate students’ academic achievement that was akin to one of the pep rallies regularly held for the school’s cherished sports teams.

Teachers handed out certificates, pins and bumper stickers. Students whooped for their classmates. One uncle yelled out rapper DJ Khaled’s catchphrase, “Another one, another one,” for every repeat award winner. By the time parents left, Tarka, the assistant principal, was dripping with sweat, the New Haven Independent explained in its coverage.

Samoa Nguyen has experienced first hand the impact of opening up access to Advanced Placement courses.

Nguyen – a senior at Hall High School in West Hartford, where 60 percent of juniors and seniors will take an AP course – said there are some cons, however.

“There is this arms race to push students beyond their capabilities,” said Nguyen, who also is a student member of the State Board of Education. “I see the point of opening the door – you are trying to prepare students for where they are headed after high school. But I have seen counselors push students to take certain courses that are outside their ability. There are students in courses that aren’t ready to take that course level and that ends up watering down the course. Yes, I want equal opportunity, but that doesn’t mean everybody has equal ability.”

“Teachers told us that, even though they believe that the program’s quality is holding up in the face of tremendous expansion, they also see troubling signs in their classrooms,” the report by the Thomas B. Fordham Institute, an education advocacy think tank, said. Most of the respondents said they believed that high schools are expanding their programs in an effort to improve their rankings.

Decades of research into the impact of opening access on students’ learning and outcomes shows mixed results.

In Connecticut, as access expanded, course and exam pass rates overall have remained steady, with about 70 percent of Connecticut public school students passing the end-of-course exam. The College Board considers a score of 3 as passing on a scale of 1 to 5, though colleges vary in the score they require in order to grant credit.

The pass rate also has remained steady in New Haven, but there only a third of students pass, and officials acknowledge that is not acceptable.

So the district this year started what they call pre-AP courses with two goals: to give students a test run in a challenging course to show them they have the ability to succeed as well as to help them prepare for AP-level material.

Essentially, the thinking is that providing more students the opportunity isn’t enough, and the district needs to help ease students into the rigor of these courses. Research has shown that opening access when coupled with adequate preparation helps boost success rates.

“There is going to be no gatekeeping to get into these [pre-AP] courses,” Worthy said. “We had to do something more to get them ready,” he said. “This is for all students at or near grade level. We think they will do great.”

Accolades for academic excellence in AP courses for students at Hillhouse High School in New Haven.

The Mirror’s exploration of ways to close persistent gaps in educational achievement is supported in part by a grant from the Solutions Journalism Network and the Nellie Mae Foundation. View more of the projects they have funded here. The Connecticut Mirror retains sole editorial control over the content of this coverage.