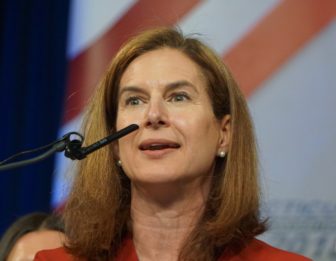 The Democratic nomination for lieutenant governor will be settled at an August primary between former Secretary of the State Susan Bysiewicz of Middletown and Eva Bermudez Zimmerman of Newtown.

Bysiewicz, who is gubernatorial nominee Ned Lamont’s choice for running mate, won her party’s state convention endorsement Saturday with 59 percent of the delegate vote. But Zimmerman, who also spoke with Lamont about running as a team, won 40 percent of the vote after only three days of campaigning.

“If I’ve learned one thing in politics, it’s to expect the unexpected,” Bysiewicz said to open her remarks to the convention after winning the endorsement — with far less support than many anticipated.

Bysiewicz urged those who spent the past months backing her bid for governor to rally behind the party ticket.

“We didn’t unify nationally in 2016 and boy we are paying the price now,” she said. “Thank you for believing in me and for everything you’ve done for me, our party, our state and for everything you will do for our team to help us win. Your support means the world to me and will be crucial to Democrats’ winning in November.”

But she also focused much of her address on the two Republican governors who ran Connecticut from 1995 through 2010.

Bysiewicz, who won the 1998, 2002 and 2006 elections for secretary of the state, called those victories “bittersweet” because she had to serve with GOP governors John G. Rowland and M. Jodi Rell.

“I remember what it was like to see reckless spending and radical agendas,” she said. “I remember what it was like to have corruption, cronyism and conservatism that are totally opposite of the values that our party stands for. … Instead of an economy that works for everyone, we got an economy that only worked for the very wealthy and corporations that were lining Republican pockets. We are not going back to that again.” 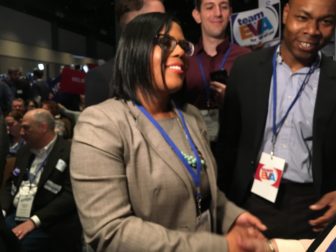 Zimmerman, who is bidding to become the Democrats’ first Hispanic statewide nominee, has forced Connecticut Democrats to re-examine the diversity of their slate this year.

“I had my numbers, I knew I was secure,” Zimmerman said after the voting. “I knew that I had momentum. I knew that I believe in something and that was going to take charge and take change.”

State Sen. Mae Flexer of Killingly, who delivered one of the nominating speeches for Zimmerman, cast her candidacy as generational change, as well as an embrace of diversity.

A labor negotiator and child care director with Service Employees International Union, Zimmerman is a former town councilor for Newtown who ran unsuccessfully for the General Assembly.

Vinnie Mauro, the Democratic chairman of New Haven, publicly rebuked Lamont this past week after the Greenwich businessman announced he was teaming with Bysiewicz. Mauro said Lamont erred badly in previously signaling to urban Democrats that he would select a running mate who was either black or Hispanic, and then cutting a deal to avoid a primary with Bysiewicz, who had been running for governor herself.

But other delegates said the diversity question was not the deciding issue for them.

Veronica Wallace of Guilford said she looks forward “to the day when gender and race don’t play a role in any politics, it’s all about someone’s qualifications.”

Diversity was not an overriding concern, she added, “because I think the Connecticut Democrats stand for diversity, and I think we already have it in our judges, or elected officials throughout the state, or state party. I think we already are diverse.”

Former Danbury Mayor Gene Eriquez  said, “I believe Susan has the depth of experience to step in [and] first of all be a great lieutenant governor. … So she’s most capable, intelligent, has experience in government, and I believe is eminently qualified.”