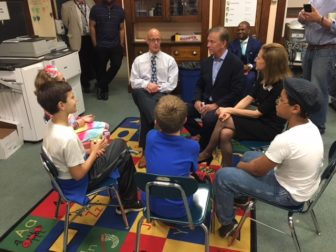 Ned Lamont, the convention-endorsed Democratic gubernatorial candidate, toured an elementary school in Middletown, one of the state’s 33 lowest-performing school systems. On an early June day, such a tour normally would be a soft-focus campaign stop, perhaps garnering some local press.

The visit Tuesday to Macdonough School by Lamont and his running mate, Susan Bysiewicz, who attended public schools in Middletown and lives there, underscored Lamont’s support of the state’s current system of prioritizing education aid for the neediest school systems, which now get extra attention from the state as Alliance Districts created by the administration of Gov. Dannel P. Malloy.

“You really have to direct your education dollars based on need and based on distress,” Lamont said. “That’s something Gov. Malloy has done.”

But on a day when Lamont came prepared to talk about public schools, he got an awkward lesson about how easily a candidate can be jostled off message — especially when faced by an unconventional and aggressive rival, Bridgeport Mayor Joseph P. Ganim, one of two candidates petitioning to force a Democratic primary.

Ganim, whose first tenure as mayor ended with his conviction in 2003 on 16 felonies arising from an elaborate practice of extorting city contractors, introduced a note of class warfare in a sound bite aired over the weekend on WTNH, Channel 8’s Capitol Report: “Any time you’re going against a multimillionaire who lives in a house with eight bathrooms, you wonder what that life is like.”

The line was amplified Tuesday morning by a page-one story in The Hartford Courant and then again by WTNH’s long-time poltical reporter, Mark Davis, who asked Lamont and Bysiewicz in the school’s lobby about Ganim’s suggestion that Lamont’s wealth left him out of touch.

“I think it’s a little sad he’s going after personal attacks when we have so many big issues confronting the state of Connecticut,” Lamont said. “Joe, let’s talk about what we’re going to do to make sure everybody has opportunity in this state. And that’s what my focus is for the next three months during the primary and for the next six months.”

“Have you ever cleaned one of those bathrooms?” Davis asked.

“I’m sure Annie has made him do that,” Bysiewicz quickly said, drawing a laugh from Lamont. Ann Lamont is the candidate’s wife.

Bysiewicz was asked if Ganim’s shot was unfair.

“Here’s what I would push back on: We have had some great leaders — the Kennedy family, Lowell Weicker —  who come from privileged backgrounds,” she said. “But the common thread is they are passionate about public service, just like Ned is. And I applaud anybody who wants to put themselves out there and run for an office and want to make a difference.”

In the two-and-a-half weeks since Democrats overwhelmingly endorsed Lamont and declined to give Ganim sufficient support to qualify for a primary without petitioning, Lamont has rarely taken the offensive against Ganim or the GOP field.

He seemed uncertain Tuesday whether to ignore Ganim, though professed to be untroubled by the prospect of a primary. Ganim and Guy L. Smith, a retired communications executive seeking office for the first time, both are petitioning.

“I welcome a primary,” Lamont said. “Let’s keep it on the issues. I think that’d be helpful. We’ve got big issues confronting the state of Connecticut, and if there are some differences in how we approach it, that’s what a primary is all about.”

On education, Ganim offered no disagreement with Lamont. But he declined to say if he would have taken the hard line drawn by Malloy last fall in defense of education spending for the state’s poorest and neediest schools. Malloy was willing to cut aid to more prosperous system to help the Alliance Districts.

“I don’t think you make that call at this point,” Ganim said. “I think you make funding public education a priority across across the board ,and you figure it out. You don’t pit one against the other.”

He offered no regrets for questioning the ability of Lamont, who was a volunteer teacher in a public high school in Bridgeport more than a dozen years ago, to understand poorer voters.

Ganim, who owned a four-bedroom, 2.5-bathroom home in Black Rock, a waterfront enclave in Bridgeport, before leaving for a seven-year stay in federal to prison in 2003, says he now lives in the first-floor apartment of a three-family home on Monroe Street that he purchased last fall.

Questions about Lamont’s wealth are hardly new: Lamont, the founder of a cable-television company and scion of a wealthy family, largely self-funded campaigns for U.S. Senate in 2006 and governor in 2010, as he is this year. He is not alone: 29 candidates for Congress this year have given between $1.1 million and $7.5 million to their own campaigns.

Two Republicans, David Stemerman of Greenwich and Bob Stefanowski of Madison, are largely  self-funding their Connecticut gubernatorial campaigns. Neither has said how much they are willing to spend.

President Trump may be the most famous self-funder, but not the most generous. The $66.6 million he spent on his 2016 campaign was less than the $100 million one of his cabinet members, Linda McMahon, spent on her two losing U.S. Senate races in Connecticut.