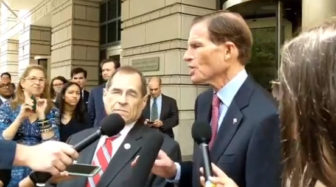 Washington – A federal court on Thursday  heard arguments in a case brought by Sen. Richard Blumenthal and dozens of other Democratic lawmakers who claim President Donald Trump has violated the U.S. Constitution by failing to seek and obtain the consent of Congress before accepting benefits from foreign states.

Blumenthal leads a group of nearly 200 Democrats who’ve sued  Trump because they say he is not complying with a Constitutional provision, known as the Foreign Emoluments Clause, that requires the president to seek permission from Congress before taking payments or  gifts from foreign governments.

The Founding Fathers, led by Alexander Hamilton, wrote the emoluments clause because they were concerned about foreign corruption in the United States.

Brianne Gorod, a lawyer for the liberal Constitution Accountability Center, who represents the Democratic lawmakers, has asked Judge Emmet G. Sullivan of the U.S. District Court for the District of Columbia to force Trump to comply with the emoluments clause.

“Without enforcing it, without the court ruling in our favor, the Constitution is declared dead,” Blumenthal said.

But the legal question on Thursday was whether Blumenthal and his fellow Democrats have standing to sue.

Blumenthal said they did because members of Congress are the only ones who can enforce the emoluments clause.

Trump “is not going to the ordinary citizen, he does not have to go to another office. He has to come to Congress and it’s our right and responsibility to consent or not,” Blumenthal said.

The Justice Department attorneys who represented Trump argued Congress doesn’t need a request from Trump before deciding whether to grant consent. They say lawmakers can vote to bar the president from accepting a foreign gift.

“We can’t consent to what we don’t know,” Blumenthal said.

He also said that if Congress passed a law banning an emolument, “well, okay, the president would veto it.”

Trump has never sought consent from Congress for the benefits his business may have received from foreign governments.  The president has stepped down from running his $3 billion empire, but retains ownership interests. In contrast to previous presidents, Trump has not sold his business interests before taking office, or put them into a blind trust.

Supporters of the lawsuit say Trump may have benefitted from rent payments made by entities owned by foreign states that pay rent at Trump Tower in New York City. The president may have also benefitted by the Chinese government’s granting of 40 trademarks to the Trump Organization.

More recently, Trump’s softening of sanctions against Chinese telecommunications maker ZTE — a company that has been fined in recent years for shipping American goods to embargoed countries, including Iran and North Korea —  has been cited by the president’s opponents as an indication of the need to enforce the emoluments clause.

An Asian newspaper reported last week that a real estate development project in Indonesia, containing a number of hotels, homes and a golf course bearing the Trump name, received $500 million in loans from the Chinese government.

Beside protecting against corruption by foreign agent, the foreign emoluments clause could also shield the nation from a threat to national security, Blumenthal said.

If Sullivan allows the lawsuit to go forward, Blumenthal and the other plaintiffs can seek documents the president has not made public, including his tax return and financial statements.

“The goal is to know all of the foreign payments and gifts, because now we know nothing from him,” Blumenthal said. “Everything we know comes from press reports.”

There were once three lawsuits against the president concerning emoluments. A judge dismissed one of them, and another judge narrowed the scope of the second lawsuit.

“We are now the only game in town,” Blumenthal said.