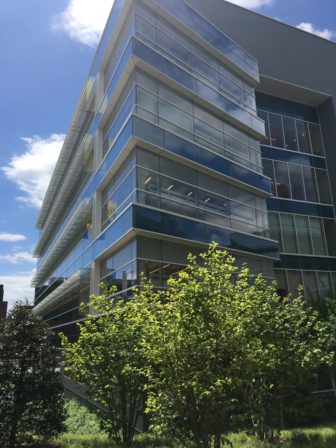 The University of Connecticut’s new $95 million Engineering and Science Building.

With University of Connecticut President Susan Herbst and Gov. Dannel Malloy both nearing the end of their tenure, the two shared a celebratory moment Monday afternoon as they joined students, faculty, legislators, and industry partners in cutting the ribbon to the university’s new Engineering and Science Building.

The $95 million, five-floor facility, which houses the School of Engineering and the Institute for Systems Genomics for undergraduate and graduate students, is the product of Herbst and Malloy’s successful efforts to expand the flagship school’s science, technology, engineering, and math (STEM) programs. The university is now ranked by U.S. News & World Report as the No. 18 public institution in the country.

Situated across from UConn’s chemistry and pharmacy facilities, the 118,000 square foot structure boasts a modern-glass facade and includes laboratories, offices, and meeting spaces.

“A cutting edge building like this helps us to serve one of our core missions, which is to serve as a vital resource to the state, providing Connecticut with new technologies and highly skilled graduates,” Herbst said. “This represents not only an investment in UConn, but an investment in Connecticut.”

According to Herbst, the building is the first in UConn history to embrace an open laboratory design which “will enable collaboration, innovation across some of the fastest growing research fields in the world.”

Its opening is just one of the many expensive projects Herbst and her colleagues, in conjunction with the Malloy administration, have undertaken to dramatically expand and modernize UConn’s science and engineering programs.

Throughout the coinciding eight years in their respective offices,  Malloy and Herbst have embraced a long-term-investment plan to develop UConn into a nationally acclaimed research university. The bulk of their efforts focused on expanding the STEM programs with a shared goal of leveraging the university to not only benefit students and faculty, but also to equip Connecticut with technology and brainpower to stimulate its struggling economy, Malloy said at the ceremony. 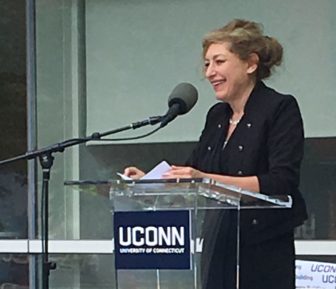 University of Connecticut President Susan Herbst: “…collaboration, innovation across some of the fastest growing research fields in the world.”

“A few years ago, Connecticut was struggling from a lack of investment in its institutions,” he said.  There was “a lack of job growth for a long period of time. The only way to change that is to decide we were to make long-term decisions in the state of Connecticut.”

To improve the turbulent economy and catalyze change, Malloy said, it was necessary “to make investments in our institutions of higher education and we treat our biggest employers our partners in those transactions.”

Malloy and Herbst’s plans were laid out in 2013 with Next Generation Connecticut –an expansion initiative championed by the governor and legislators to spur research and innovation at UConn. The $1.5 billion initiative has enabled the university to increase collaboration with the private sector by enhancing laboratory and housing facilities to support students in the research disciplines, increase enrollment in the engineering and science fields, expand faculty, and develop UConn’s branch campus STEM programs in Hartford and Stamford.

Though some legislators initially expressed their doubts as to the viability of the initiative,  UConn officials lauded Next Gen CT’s positive impact on the state’s economy.

“Nearly 40 percent of our state’s economy is generated by engineering-related industries, and with our 70 percent increase in engineering enrollment, and significant investment in resources, UConn is providing research, talent, and technology that will pay dividends for decades to come,” said Kazem Kazerounian, dean of the School of Engineering.

Since the plan’s adoption in 2013, the school has enjoyed not only a spike in enrollment to its engineering program, with 76 percent of UConn’s most recent graduates from in-state living and working in Connecticut, but also emerged as the first engineering program in the nation to close the gender gap, according to Malloy. Additionally, the governor said,  the expansion’s success has encouraged companies such as submarine developer General Dynamics Electric Boat and aerospace manufacturer Pratt & Whitney to remain in Connecticut, collaborating with students in the school’s cutting-edge research facilities.

“I’ve probably dug more holes and cut more ribbons on this campus and other campuses than just about any other governor, and I’m proud to have done it,” Malloy said, referring in part to the $300 million series of projects launched in 2014 to further the goals of Next Gen CT.

The project included the a multi-story research building, a large housing complex for STEM-field students, and a 3,400-foot road extension to connect the Storrs campus technology park with Route 44 on the campus’ northern edge.

Malloy attributed much of the campus’ academic upswing to Herbst,  UConn’s first female president since its founding in 1881 .

“I do want to acknowledge how much I’ve appreciated and enjoyed….working with you and the team you have assembled,” he told the school’s president. “Congratulations on this day and so many other days at this great university that you will leave in a much better place than when you came.”  Earlier this month Herbst announced she will be stepping down in 2019. 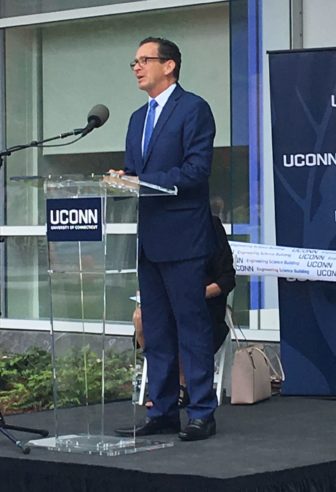 Malloy: “I’ve probably dug more holes and cut more ribbons on this campus and other campuses than just about any other governor, and I’m proud to have done it.”

The governor, Herbst offered, “has been a tremendous friend to UConn.”

“He not only understands [the school] is an economic engine for the state of Connecticut, but he understands the importance of the liberal arts. A university is not just about a return on investment, it’s also about creating great citizens and leaders, the generation that will make this world an even far better place.”

But as both chief executives enter the final stages of their respective administrations, State Sen. Mae Flexer, D-Killingly, said, the state must continue its legacy in public education by addressing the school’s shortage of faculty. While the student enrollment in the engineering program has increased by 70 percent, there’s only been a 30 percent increase in faculty for the engineering department, Flexer said.

“That’s not sustainable,” Flexer said. “We’ve got to make sure that the students have the faculty and staff to support them to be successful if this is truly going to be an investment in Connecticut’s economy.”