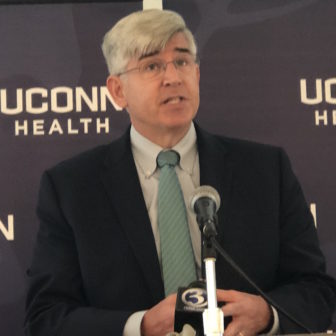 As the number of Connecticut residents dying from opioid overdoses soared, the state’s medical examiners were inundated with bodies that needed autopsies.

In January 2017, the state medical examiner’s office lost its full accreditation and was downgraded to provisional status because of staffing and facility shortcomings driven largely by budget cuts.

As it has made improvements, the office still has provisional status and will be reviewed again by NAME this fall.

U.S. Rep. Elizabeth Esty, D-5th District, hopes to bring some financial relief to the state’s medical examiner’s office, as well as offices across the country, through legislation she is sponsoring with Rep. Ann McLane Kuster, a Democrat from New Hampshire, and Rep. Tom MacArthur, a Republican from New Jersey — all members of the House’s bipartisan Opioid Task Force.

At a press conference at UConn John Dempsey Hospital in Farmington on Tuesday, Esty said she planned on introducing the bill once she got to Washington D.C. on Tuesday night.

Connecticut’s medical examiner’s office has “very well-qualified people,” Esty said, but “they just could not keep up with the body count … They need help for their staff. They need to be able to hire more people.”

This legislation, if enacted, would authorize $10 million per year through the Community Oriented Policing Services (COPS) program to be used for police forensic labs and medical examiner offices to pay for staff, equipment and overtime. The legislation also allows police departments to use these grants for additional field testing equipment. The U.S. Senate has a companion bill.

“We all know and agree to defeat the opioid crisis we must focus resources on treatment and prevention, but medical examiners also play a role and often a forgotten role,” said Dr. James Gill, the chief medical examiner, at the press conference.

“Medical examiners are forensic pathologists, who are part physician, part detective and part public health proponent,” Gill said. “Because we investigate death, some may believe that our work is too late to be helpful. But much of our work actually involves helping the living.

“With the opioid crisis, we help by determining who is being affected, what drugs are causing death, where and how. We explain to families during the most emotional times of their lives what happened,” he said. “More people are dying in Connecticut last year and the year before from drug overdoses than all the people in Connecticut who died of homicides, suicides and motor vehicle deaths combined.”

After the press conference, Gill said that his office needs nine medical examiners for the number of deaths they handle each year. Right now, he said the office has seven, with an eighth medical examiner starting in July.

Of those 1,038 deaths, 677 involved fentanyl —  a synthetic opioid drug 30 to 50 times more powerful than heroin — either by itself or with at least one other drug. All other drug overdose deaths totaled 361, a five-year low.

The opioid crisis and student athletes

“We know from work with so many of you in the medical community that student athletes, often their gateway into opioids is through pain medication properly prescribed,” she said.

A bill was introduced on June 1, which Esty co-sponsored with with MacArthur and Rep. John Larson, D-1st District.

The bill would provide money to augment current drug prevention programs to allow schools, communities and youth athletic associations to provide evidence-based prevention programing to reduce the risk of opioid misuse and overdose among students and student athletes. The U.S. Senate also has a companion bill.

Molded after a similar program included in the Children’s Health Act of 2000, the legislation would authorize the Assistant Secretary for Mental Health and Substance Use to provide $10 million annually to support prevention programs for students and student athletes, as well as training for teachers, administrators, trainers, coaches and athletic directors. 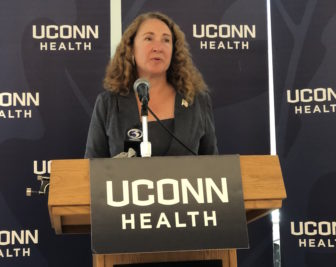 The bill would enhance current youth prevention efforts in two ways. First, it would be the only youth program focused exclusively on opioids. Second, it would be the first legislation to target opioid prevention at youth, high school and college athletic associations and personnel including coaches, trainers, and athletic directors, according to Esty’s office.

“Prevention is key,” said Dr. Katherine Coyner, an orthopedic surgeon and sports medicine physician at UConn Health. “I was an athlete. I played college basketball, so I definitely understand getting back to playing sports, and sometimes athletes don’t want to miss games and unfortunately turn to self medication.

“That’s where these kinds of prevention programs can really be impactful,” said Coyner, who is also a team physician for UConn Athletics.