Hayes, a passionate educator running for Congress in an outsider’s year 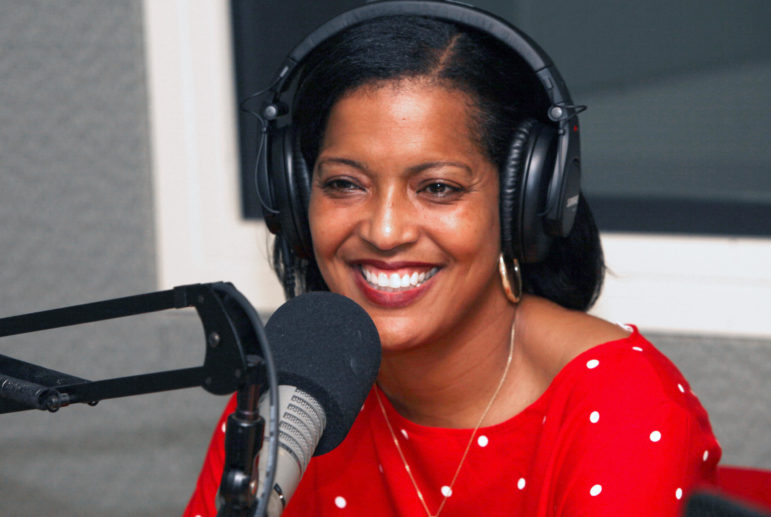 Jahana Hayes was with 19 of her students in California this spring, building a Habitat for Humanity house in an area decimated by forest fires, when she had the epiphany.

She should run for Congress.

“I try to teach these kids ‘you can be part of a community,'” Hayes, 45, said of her students from Waterbury’s John F. Kennedy High School.  “I try to tell them ‘no matter where you are in life, you have the capacity to do something.'”

Hayes realized she should take her own advice. A week after that trip to California, she entered the race for the 5th Congressional District seat.

“I wanted to give those kids a voice,” said Hayes, who, if she wins, would be the first black woman Connecticut sends to Congress.

She was named 2016 national teacher of the year for inspiring students to volunteer in community service projects such as Habitat for Humanity, and for her initiative to recruit more minority teachers.

Hayes hadn’t planned to trade the schoolhouse for the U.S. Congress. She was encouraged to run by Sen. Chris Murphy, who held the seat when he was in the U.S. House of Representatives.

Hayes said Murphy, who is eager to promote diversity in Connecticut Democratic politics, had spoken to her for a long time about engaging more in the community. When the rare chance to run for an open congressional seat came up, Hayes seized the opportunity.

She faces Mary Glassman, the former first selectwoman of Simsbury and two-time Democratic candidate for lieutenant governor, in the Democratic primary that will take place on Aug. 14.

Unlike Glassman, Hayes has no political experience, but she does not see that as an impediment to holding public office. 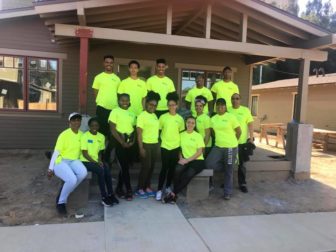 Jahana Hayes and Kennedy High School students at the Habitat for Humanity house they helped build this spring.

“Political experience is not the only type of experience,” said Hayes, who spent years teaching history and civics.

She’s attracting important endorsements in her bid to defeat Glassman. The Working Families party endorsement will help Hayes with grass roots and get-out-the vote efforts, as will the endorsement from the American Federation of teachers.

“Educators have long advocated for the kind of change our country needs, which Jahana is uniquely positioned to help deliver,” said Jan Hochadel, the president of AFT Connecticut.

Hayes says the hard knocks she suffered and obstacles she had to overcome are assets in running for the 5th Congressional district, which includes much of the western part of the state and includes 41 cities and towns.

Hayes has an impressive life story. She grew up with her grandmother in Waterbury’s toughest housing project and became a teen-age mother, like her mother and grandmother, at 17.  Her family struggled with substance abuse, relied on public assistance, and once even lost their apartment.

Hayes loved school, however, and when she became pregnant her teachers refused to give up on her, telling her someday she would go to college.

Seven years later, Hayes enrolled in Naugatuck Valley Community College. She went on to get her four year degree at Southern Connecticut State University and her masters and advanced degrees from the University of Saint Joseph and University of Bridgeport, all while working to support her young family.

She also realized her dream —  to teach history in the same town where she grew up.

Hayes said she wants to fight for “democratic ideas and democratic values” and protect the federal programs, including public education and public housing, that helped pull her out of poverty.

“I benefitted from a government that works well,” said Hayes.

She pushed back against those who say government anti-poverty programs foster dependancy.

“This idea of “every man for himself” is nonsense,” she said. “I was born into a situation I had no control over.”

Hayes is not her party’s choice to run for the 5th District seat. 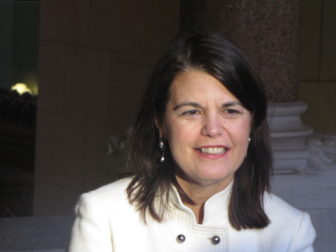 Glassman squeaked out a narrow victory over Hayes at the 5th District party convention in May, an event marred by accusations of dubious vote switching.

Still, the state AFL-CIO rejected Glassman in favor of Hayes, an important endorsement. Another political boon for Hayes is that diversity has been a driving force in Democratic primaries this year, with Democratic voters picking women, racial minorities and gay and lesbian candidates in races around the country at historic rates. There’s also been a trend toward greater support for first-time and younger candidates.

The primary victory of Alexandria Ocasio-Cortez, a 28-year-old Latina who not too long ago made her living tending bar, over veteran New York Rep. Joseph Crowley is considered a result of the new Democratic voter preferences.

Hayes said, “I can’t take this skin off,” but agrees that the timing of her campaign may benefit her.

“This is a time in history when people want something fresh,” Hayes said.

She also said she was encouraged to enter the political fray by  the surge in women running for office this year,  motivated by what she sees as threats to abortion rights and other reproductive and women’s health issues.

Hayes, who supports “Medicare for all” and other progressive ideas, is following a playbook used by Ocasio-Cortez, running to the left of her primary rival. She says on her Twitter account that she is  “passionate about equity (and) social justice.”

Cassandra Fann-Pierce and fellow teacher at John F. Kennedy High School nominated Hayes as teacher of the year and said she fought for her to win the title.

Fann-Pierce  says they first met when Hayes walked into her classroom nearly a decade ago and said “I just think I need to know you.”

She said Hayes was an excellent teacher “approachable, intelligent and willing to work hard.”

But she doubted herself. 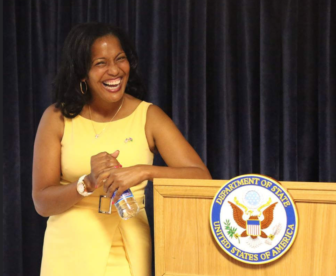 “She always thought what she did wasn’t good enough, but it actually was,” Fann-Pierce said.

“She wants the truth, not just what people want to believe,” she said. “She told her students ‘this is the real world and this is what you have to contend with’.”

The winner of the Democratic primary will run in November’s general election against the winner of the GOP primary, either former Meriden Mayor Manny Santos; Ruby O’Neill, a retired psychology professor from Southbury or Rich DuPont, a manufacturing consultant from Watertown.

The 5th District has been represented by Republicans before, but not since former GOP moderate Nancy Johnson lost it in 2006 to Democrat Chris Murphy, who now represents Connecticut in the Senate.

The seat is currently held by Rep. Elizabeth Esty, a Democrat who decided against re-election after drawing fire for mishandling a sexual harassment complaint against her chief of staff.

Esty’s seat was already on the Democratic Congressional Campaign Committee’s list of vulnerable incumbents because Hillary Clinton carried the district narrowly, 50 percent to 46 percent for Trump. Yet Esty won re-election by 16 points.

After the Esty scandal broke, the Cook Political Report moved the seat from “solid Democratic” to “likely Democratic.”

That race may help boost turnout, Schurin said, beyond the “engaged party people” who are usually the majority of votes in a primary election.

“People who are moderately interested but not deeply politically engaged may come out to vote and Hayes may be helped by the larger number of people at the polls,” he said.

Not surprisingly, Hayes said education will be her main focus if she’s elected, including career training to help those in a state like Connecticut where manufacturing is a key component of the local economy.

“Education saved my life,” she said.

To Hayes, education “is not a single issue. “ She said there  were kids in her classroom without enough to eat, proper medical care or even a roof over their heads.

“People’s basic needs have to be met,” Hayes said.

Hayes lives in Wolcott with her husband, Milford Hayes, who is a city police detective. She has four children, the youngest is 10 years old and the others are adults.