Election polls at an elementary school in Hartford

Connecticut residents are registering to vote at an unprecedented rate in a non-presidential election cycle, indicating increased interest in politics since President Donald Trump won the White House, analysts say.

According to data from the Connecticut Secretary of State’s office, from the 2016 election through June of this year, 81,908 new voters registered as Democrats, compared to 43,390 who registered as Republicans.

Including those who signed up as unaffiliated and for other, smaller parties, a total of 275,114 people have signed up to vote in Connecticut since the 2016 presidential election.

That’s a surge in voter registration in the state during a mid-term election cycle, when the number of those signing up to vote is usually depressed.

In the same 20-month period during the last midterm cycle, only 34,517 Democrats and 16,392 Republicans registered to vote.

“People are more intensely politically involved in this off year,” said Ron Schurin, a political science professor at the University of Connecticut.

The new voters in this election cycle will join the hundreds of thousands of Connecticut residents who are already registered by party and are eligible to vote in the Aug. 14 party primaries, which are closed to unaffiliated voters.

The number of registered voters is expected to increase as the parties escalate voter registration drives through the summer and early fall ahead of November’s general election.

The boom that’s already apparent in voter registration could be an indication of greater political involvement among state residents.

Gary Rose, head of the political science department at Sacred Heart University, said the rise in Democratic voters is an indication of “a Democratic Party fired up over Trump.”

Schurin said that on the Democratic side, the increased voter rolls are  “clearly related to a reaction to Donald Trump.”

“I don’t think Trump is a significant factor there,” Schurin said. “Maybe some people are motivated to register as Republicans because of the antipathy to the Malloy administration.”

The state’s new “motor voter” law has made it easier for all residents, including independents, to register to vote.

The Connecticut Secretary of State defines active voters as those who have voted in the last two federal elections. However, Connecticut residents are not removed from voting rolls until they are on the inactive list for four years, so many “inactive” voters can vote in the primary and general election this year.

Despite the growth in Democratic and Republican voters, unaffiliated voters continue to be the biggest bloc of voters in Connecticut.

According to a recent University of Virginia study on voter registration, Connecticut is in a minority of states when it comes to the numbers of unaffiliated voters. It is just one of six states where independents are a plurality and Democrats outnumber Republicans.  But the study also said that, nationally, the number of voters choosing to identify themselves as independents is growing.

“With the growth in independents, many voters seem to be saying to the two major parties: ‘a pox on both your houses,’” the study said.

Rhodes Cook, a political analyst who helped write the UVA study and publisher of the Rhodes Cook political newsletter, said party affiliation is the most important factor in the outcome of an election, because unaffiliated voters nationally split close to 50-50 when it comes to voting for a Republican or Democratic candidate in a general election.

“More and more in the political age of ours, when you register as a Democrat or a Republican you are doing so with intent,” Cook said.

He also said that although independents are a growing plurality, Connecticut is “a fairly blue state.”

The UVA study also said that, nationally, 40 percent of all voters in party registration states are Democrats, 29 percent are Republicans, and 28 percent are independents.

Kyle Kondik, a political analyst with UVA’s Center for Politics, said although Connecticut has voted for Democrats on the federal level, its voting pattern for local offices has been different.

“A fair number of Democrats don’t vote for the Democratic candidate,” he said. “And Connecticut is also a state that is historically very comfortable in electing Republican governors,” he said. 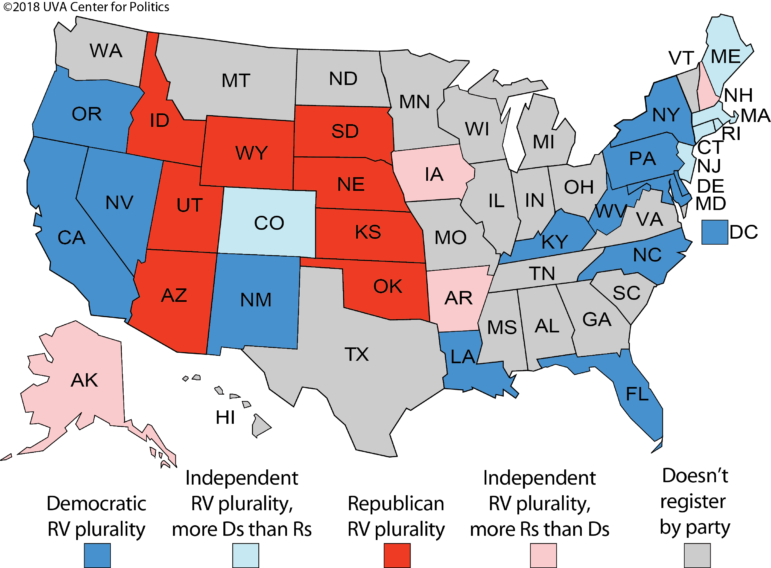