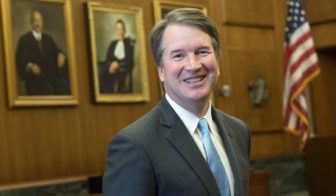 Washington – Democrats  have opened a new front in their battle to obtain a mountain of documents from Supreme Court nominee Brett Kavanaugh’s tenure in the White House by filing Freedom of Information Act requests for that information, Sen. Richard Blumenthal said Wednesday.

The FOIA requests were filed with the National Archives, the Justice Department, the Department of Homeland Security and the CIA, Blumenthal said.

Fellow Democrats on the Senate Judiciary Committee, who will participate in Kavanaugh’s confirmation hearing, have also filed requests under the Presidential Records Act to the National Archives, Blumenthal said.

Blumenthal said the FOIA requests and the other action the Democrats are taking to obtain Kavanaugh’s White House records are “unprecedented” and an “unfortunate step,” but necessary because Republicans on the Judiciary Committee have only requested documents from the two years Kavanaugh worked in the legal office of the Bush White House — and not the  three years he worked  as the president’s staff secretary.

“I regret that chairman (Charles) Grassley has left us no other choice,” Blumenthal said.

Blumenthal said documentation of Kavanaugh’s years as staff secretary is needed because there are “serious questions” about Kavanaugh’s involvement in the Bush White House’s torture policy and other issues.

“There is too much at stake to accept less than a complete picture,” Blumenthal said.

Republican senators said Democrats are being “unreasonable” and that their goal is to delay Kavanaugh’s inevitable confirmation. They say documents pertaining to Kavanaugh’s role as staff secretary are irrelevant.

“I hope [Democrats]  decide to put away their election-season talking points and we get a qualified person on the Supreme Court,” Grassley said at a press conference last week. Grassley is hoping to have Kavanaugh confirmed in September and seated before the high court’s new session in October.

As staff secretary, Kavanaugh was in possession of nearly all documents that reached the president from 2003 to 2006. Kavanaugh went on to work in the legal office of the White House.

Blumenthal said all of the records the Democrats are requesting should have been reviewed by the Trump administration before they nominated Kavanaugh.

“If they failed to review these records – shame on them,” he said.

Blumenthal also said the Judiciary Committee Democrats expected a response to their FOIA’s within 20 days and were ready to take legal action if they failed to obtain the documents they have requested.

But he also said he is very hopeful the archivist at the National Archives “will respond completely.”

“The urgency of this request could not be greater,” said Nan Aron, president of the liberal Alliance for Justice. “What are they hiding?”

Aron, and others seeking Kavanaugh’s White House records, say Democrats on the Judiciary Committee are entitled to make the same demands Republicans made when they asked for Justice Elena Kagan’s White House records during her confirmation proceedings. Kagan served former President Bill Clinton before joining the federal bench.Republicans received all the records from her time at the White House.