It’s one of the few issues agreed upon by every candidate in Connecticut’s crowded gubernatorial field: the need for more worker concessions to offset surging retirement benefit costs.

But despite that consensus, it remains unlikely that Connecticut’s next governor has the leverage to secure more givebacks — since he will have no authority to order large-scale layoffs for the first two years in office.

And while union leaders haven’t drawn any lines in the sand, they note their members already have reopened contracts to save Connecticut money four times since 2009. 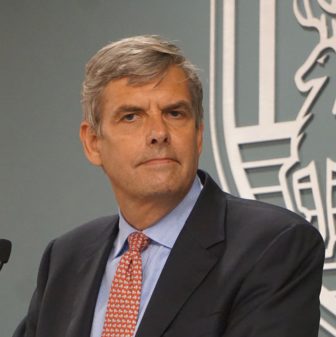 The five Republican candidates have been most aggressive on the need to obtain concessions, with some even suggesting that benefits for current retirees somehow be curtailed.

“We’ve got a massive deficit in this state,” said Madison Republican Bob Stefanowski. “Nothing is off the table.”

Formerly the chief financial officer of UBS Investment Bank and a senior executive at GE, Stefanowski has touted his business experience frequently throughout the campaign, insisting he would use it to “rip costs out of the state budget like you have never seen in your life.”

With nonpartisan analysts warning state finances are on pace for major deficits after the election — $2 billion in the first fiscal year and $2.6 billion in the second — candidates from all parties insist they aren’t looking to raise taxes, and some want to reduce them.

But how do you cut a state budget dominated by personnel expenses if you can’t eliminate personnel?

About 40 percent of the General Fund goes for personnel costs, including the payments the state makes into the pension fund for municipal teachers.

Another 40 percent is spread across:

Block grants to public colleges and universities — most of which is spent on salaries for their personnel — is another 3 percent.

And of the remaining 13 percent in the budget, about half goes toward community-based social service programs for the mentally ill, the developmentally disabled, abused children, and others — many of which already have sustained cutbacks in recent years. 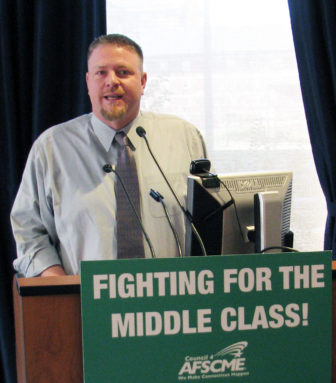 Jody Barr, executive director of Council 4 of the American Federation of State, County and Municipal Employees

Further complicating matters, pension and retirement benefit costs are projected to surge dramatically over the next 15 years as Connecticut tries to correct for more than seven decades of inadequate savings for these obligations.

Many candidates concede there is no way to stabilize state finances over the long haul without tackling personnel costs. And they also insist the next governor must address that problem right away by working with the unions.

But labor leaders say their members have done their part.

State employees granted concessions in 2009, 2011 and 2017. Tbe latter deal includes a wage freeze, new restrictions on pension and health care benefits and a four-year no-layoff provision that runs through mid-2021. In addition, the unions also reopened their benefits’ contract 20 months ago to permit the state to defer billions of dollars in pension contributions owed between now and 2032 until after that period.

With about 15,000 state employees among its 30,000 members, Council 4 is the single-largest union within state government.

A 2015 study by Center for Retirement Research at Boston College concluded that after numerous concessions plans, the pension offered new Connecticut employees is slightly below the average value of other states’ plans — and that was before a new hybrid pension/defined contribution plan was created by the 2017 concessions package.

“For our newest state employees, their pension plan —  it’s not great,” Barr said. “It is not the selling point it used to be to become a state employee.” 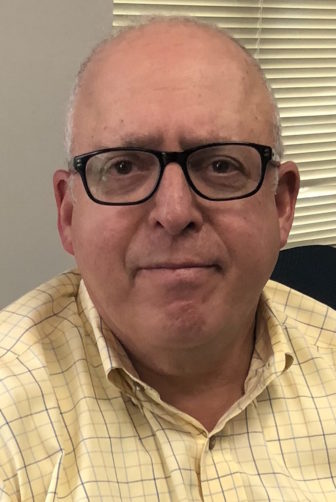 “Our union members have done more than their part to help elected leaders weather the economic storms of the past 10 years,” said Jan Hochadel, president of AFT Connecticut, whose membership includes 6,900 state employees. “Time and again, state employees, teachers and school support staff have agreed in mutual negotiations to forgo negotiated raises and accept reduced benefits to protect Connecticut’s quality of life.”

So how do these gubernatorial candidates expect to convince labor to sacrifice when unions leaders say it’s someone else’s turn? 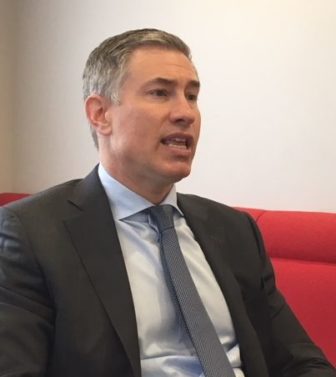 Stemerman proposed emulating corporate giants like General Motors and International Paper by ending pensions — through negotiation, if possible, or going to court to break contracts, if necessary.

“What I’m saying to you is unless we do radical surgery, you will die,” Stemerman told CT Mirror back in April. “And what I’m proposing is surgery that is aggressive, that in some cases would be novel, but I believe will save the patient’s life and will give the opportunity for the patient to thrive in the future.” 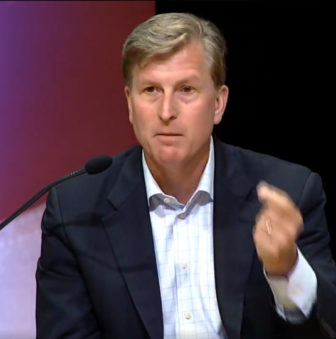 “If [negotiations] don’t work, there are always court challenges you can bring,” Obsitnik said.

But unlike corporations — and even unlike cities — states cannot avail themselves of bankruptcy courts to break contracts and force employees, and even retirees, to accept cuts in benefits.

And the commonly cited “contracts clause” within Article I of the U.S. Constitution specifically prohibits states from interfering with private contracts.

“No state shall … pass any bill of attainder, ex post facto law, or law impairing the obligation of contracts,” it reads.

And neither Stemerman nor any other candidate has cited one specific case or legal precedent which demonstrates that the state’s sovereign immunity from lawsuits would protect it in federal court in this matter.

Herbst hopes that unions would prefer to work with his administration than watch the governor and the legislature take action without them. 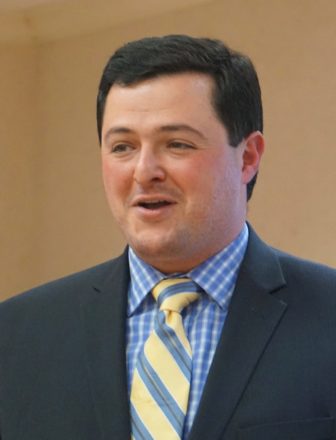 The former Trumbull first selectman said he would consider an approach espoused by his fellow Republicans in the state legislature over the past two years.

GOP lawmakers have proposed scaling back pension and retirement health care benefits starting in July 2027 — when the current benefits contract expires — but reaping some of the savings now. The full legislature rejected those proposals.

Union leaders, Gov. Dannel P. Malloy, and many of the governor’s fellow Democrats in the legislature have said this approach would violate collective bargaining rules and fail to withstand a court challenge.

“I feel I will have a greater capacity to get legislative approval” for this approach, Herbst said.

Republican Mark Boughton, the mayor of Danbury, prefers a carrot approach over the stick.

Boughton hopes to attack this problem by enticing retired public-sector workers, and vested employees still on the job, to forfeit their pensions by accepting a lump-sum buyout equal to a portion of the overall value — something union leaders insist would be rejected overwhelmingly. 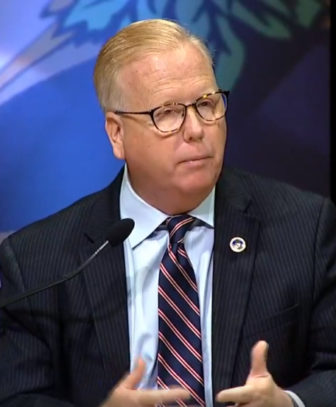 But Boughton could be blocked here by his fellow Republicans in the legislature, who insisted last year on establishing a new cap on state borrowing. This could make it difficult for Boughton to borrow the pool of funds needed to offer pension buyouts — and those funds would come at the expense of bonding currently used to build schools, maintain state buildings and upgrade public colleges and universities.

“It will take hard work, but Connecticut’s comeback is real and achievable if we start making the right decisions and public policy choices,’’ he said.

The two Democrats running for governor, Greenwich businessman Ned Lamont and Bridgeport Mayor Joseph P. Ganim, both are counting on their track record to bring labor to the table. 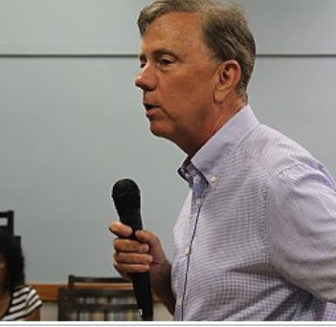 “We’re all in this,” said Lamont, who was endorsed by the Connecticut AFL-CIO, the state’s largest labor coalition. “Business is in this. The consumer is in this. The taxpayer is in this. Labor is in this. We’ve got a budget pickle. … If we’re not all at the table working in good faith we’re going to have a problem on our hands.”

Ganim said during his tenure as Bridgeport’s chief executive, he has struck concessions deals and negotiated savings on several occasions with public-sector unions.

“I’ve been through the whole gamut, … and I’ve come out with reasonably good, obtainable goals and results,” he said, adding that threatening layoffs has never been a tool he has relied upon. “A contract’s a contract. It has to be respected.  But the fiscal situation of the state’s got to be rectified. I do think we’re all going to sit down at the table and get it done.” 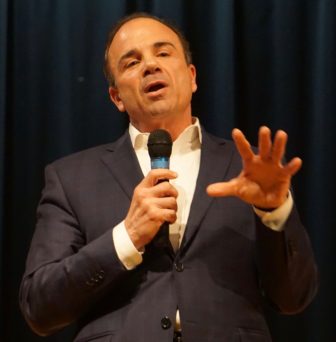 Higher taxes on Connecticut’s wealthiest households and on major corporations have been an option unions have been pushing since the last recession ended nine years ago.

And while Malloy and the legislature increased the top state income tax rate from 6.5  percent to 6.99 percent between 2011 and 2015, Connecticut’s top rate still remains below that of neighboring New Jersey and New York.

More importantly, legislators also raised income taxes on the middle class considerably over that period. Rates on middle-income households were increased in 2011 and the property tax credit — available only to the middle class — has been lowered from $500 to $100.

“It’s time to stop painting Connecticut’s state employees and educators as the problem,” Hochadel said. “The real problem is decades of tax breaks for the rich, subsidized giveaways for big businesses and short shrift for vital public safety, health, and education services.” 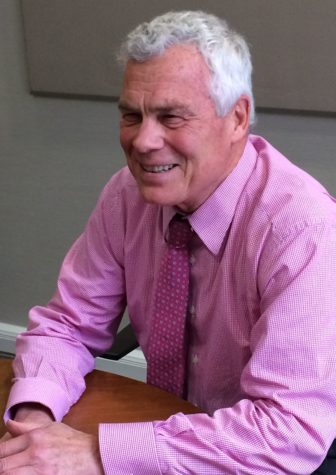 “A small portion of the population, the middle class portion, has been asked to solve these problems,” Barr said.

Independent gubernatorial contender Oz Griebel, former president of the MetroHartford Alliance, is the only candidate who said he isn’t counting on labor concessions to help balance his first biennial state budget — right away.

“I have no illusions that in the first year of the biennial that you are going to get anything done” in terms of a massive labor savings, he said. But discussions about dedicating state assets, such as lottery proceeds, to reducing pension fund liabilities, could start immediately after the election, and lead to more concessions down the road.

“When you look at where these pension numbers are going. Unless we get meaningful job growth, I think we do hit the proverbial tipping point in the coming decade,” Griebel said, adding that public-sector workers have as much of a stake in solving this crisis as anyone else. “We created  a monster for ourselves.”