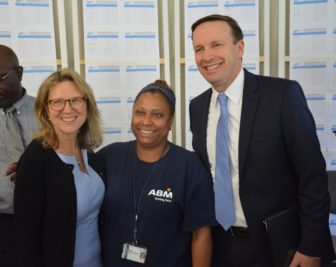 Washington – Sen. Chris Murphy is not only running for re-election this year, he’s also stumping for dozens of state candidates in a year when the governor’s office and the state assembly are in play, keeping a promise to help state Democrats – and himself.

Murphy has donated $320,000 in campaign funds to the Connecticut Democratic Party to fund a field organizing program called Fight Back CT that is focused on turning out Democratic voters across the state.

He’s gone door knocking and attended events with a number of Democrats vying to strengthen his party’s perilous, one-vote hold in the state Senate, including Vickie Nardello, who is running against Rep. Rob Sampson, R-Wolcott, for an open seat; Julie Kushner, a former union activist running against Republican state Sen. Michael McLachlan of Danbury, and Will Haskell, a Democrat seeking to unseat Republican state Sen. Toni Boucher of Wilton.

“Chris understands the importance of this moment, and he wants to be there to lend his support for Democrats this fall,” said Murphy campaign manager Jenna Lowenstein. “He’s seen the passion in the grassroots and it has motivated him to keep doing more and more.”

Murphy has also campaigned for Democrats seeking to oust Republicans in the state House. He plans to attend an event this weekend in Stamford with Matt Blumenthal, the son of U.S. Sen. Richard Blumenthal, who is seeking a state House seat.

Murphy prodded former Teacher of the Year Jahana Hayes to run for retiring Rep. Elizabeth Esty’s 5th District congressional seat and become the candidate’s political mentor. And, predictably, he has been out on the trail with Democratic gubernatorial candidate Ned Lamont, his running mate Susan Bysiewicz and Democratic candidate for Connecticut attorney general William Tong.

Capitalizing on Democratic backlash to the election of President Donald Trump, Murphy began recruiting and training grassroots volunteers in May of 2017 to prepare for November’s midterm election.

His campaign said it was able to train more than 1,000 volunteers in a single afternoon.

“People in Connecticut are more engaged in politics and campaigns right now than at any time I’ve seen in the last 20 years,” said Murphy. “Politicians are always admonishing people to vote, but that’s not good enough. This is too important. I wanted to do my part to help recruit and train volunteers so we can come out on top in November.” 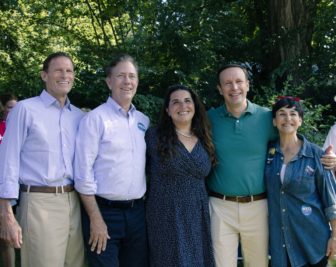 At the annual Labor Day parade in Newtown.

Others say Murphy, who is seeking his first re-election to the Senate, can afford to spend time and capital helping other Democrats this year because he’s facing an underfunded challenger, Republican Matthew Corey, a Navy veteran and business owner.

Political analysts rate the race as solidly Democratic. A recent Quinnipiac poll found Murphy would beat Corey by a 28-point margin if the election were held that day.

“Murphy had a real race in 2012 (against Republican Linda McMahon), although he ultimately won by double digits,” said Kyle Kondik of the University of Virginia’s Center for Politics. “He has no such challenge this time, which frees him up to help others.”

University of Connecticut political science professor Ron Schurin said it appears that Murphy “has made a commitment to strengthen the state Democratic Party.”

“While he has national aspirations, he wants to make sure he has a secure base,” Schurin said.

Murphy’s campaign has raised more than $13.3 million this cycle. Besides spending some of his considerable war chest to help the state Democratic Party, the senator is also donating to colleagues in the Senate who are facing tough races this year.

Taking a shot at the presidency?

From his political action committee, called the MurphPAC, Murphy has given $10,000 donations to Sens. Tammy Baldwin of Wisconsin, Jon Tester of Montana, Bill Nelson of Florida, Bob Casey of Pennsylvania, Joe Manchin of West Virginia, Sherrod Brown of Ohio, Joe Donnelly of Indiana and others.

“Murphy has established himself as a leading voice, at least, on gun control, and any prominent Democratic senator could hypothetically take a shot at the presidency in 2020,” Kondik said. “The field seems like it could be large and there’s no obvious front runner. So, Murphy can work for others and build allies who may be able to help him in the future.”

By giving to endangered Democrats, Murphy is also boosting his chances of becoming a member of the majority if he wins re-election in November.

Continued Republican control of the U.S. House of Representatives has been considered wobbly for months –a Quinnipiac poll released Wednesday shows voters preferred a Democratic House candidate to a Republican House candidate by a margin of 14 points on a generic ballot.

Recently, there have been indications that the U.S. Senate is also in play.

Republicans hold a narrow 51-49 majority in the Senate, but were expected to pick up seats due to the large number of  Democrats who are running  for re-election this year in states that Trump won handily in 2016.

But in many of those states, Democrats have taken a lead in the polls and in others, including Texas and Nevada, Democrats are posing strong challenges to Republicans who thought their Senate seats were safe.

This week, Senate Majority leader Mitch McConnell, R-Ky., said Republican candidates in the most competitive races across the country are in “a knife fight” to hold the Senate.

“It’s just a brawl in every one of those place,” McConnell said, running down a list of nine states that included Arizona, Nevada and Tennessee.

McConnell said he hopes that “when the smoke clears we’ll still have a majority in the Senate.”