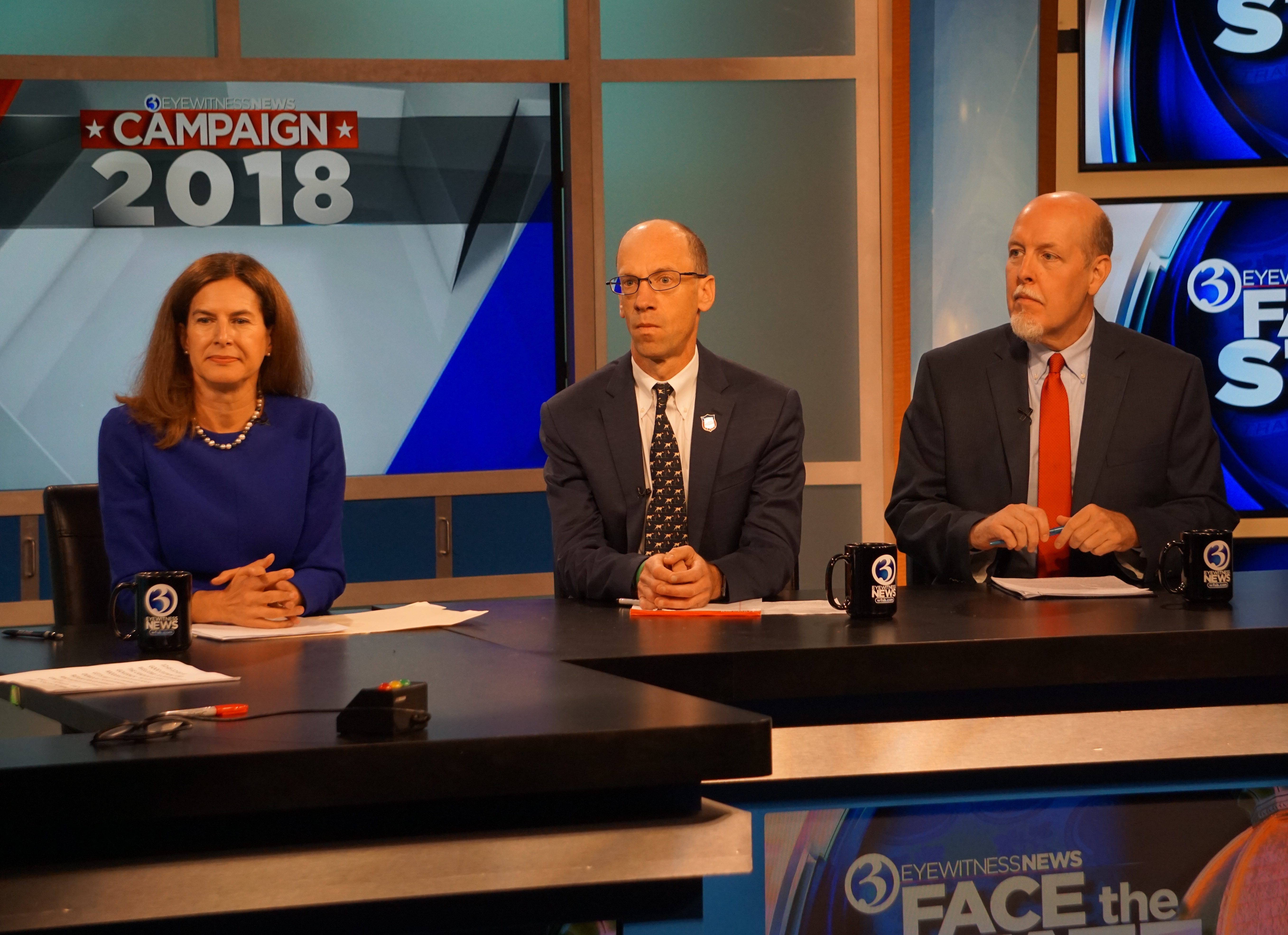 The Democratic and unaffiliated candidates for lieutenant governor made Republican Joe Markley a common target Thursday over his social conservatism, including his solitary opposition in the state Senate to bills that address issues of pay equity and college-campus sexual assault.

On an afternoon when much of the nation was riveted by testimony in Washington about sexual assault allegations against Supreme Court nominee Brett Kavanaugh, the trio of gubernatorial running mates taped a half-hour debate at WFSB, Channel 3. It aired at 7 p.m.

Democrats have tried to use Markley, 61, a state senator who is known at the Capitol for his genial nature and uncompromisingly conservative approach to most issues, as a catalyst to draw educated suburban women away from the GOP ticket led by Bob Stefanowski, who has labored to say as little as possible about anything but the state’s finances and economy.

Unlike Stefanowski, Markley did not hesitate to applaud Kavanaugh’s nomination on the basis of the judge’s philosophy and acumen, while stopping short of endorsing his confirmation. Markley said the assault allegations should be examined.

Numerous polls, including a recent Quinnipiac University poll of Connecticut voters, find a sharp gender gap, with women leaning towards Democrats. The polls are echoes of the 2016 president race, when defections by Republican women contributed to Donald J. Trump losing in GOP strongholds like Greenwich.

Markley offered no regrets for any of his past votes during his debate with Democrat Susan Bysiewicz and Monte Frank, a Democrat-turned-independent.

“I think that people know me well enough to know that I’ve always been a reasonable person who can support the positions he takes, and I’ve been a collegial person — strong in my beliefs, but not extreme in my behavior,” Markley said after the taping.

Markley said his focus throughout his career has been more on finances than social issues. He was an organizer of the 1991 income tax protest, the largest public demonstration ever mounted at the State Capitol, and a prominent critic of the Hartford-to-New Britain busway.

“I think the firmness with which I’ve pursued my goals of lower taxes and less spending are what people should focus on and not the image that somebody’s trying to create for me,” Markley said.

The first question at the debate was about a law that bars employers from asking applicants about their pay history, a question that sponsors of the legislation say perpetuates pay inequities that disadvantage women. Markley cast the sole vote against it in the Senate this year.

Markley said he and Stefanowski support equal pay for equal work, but the pay equity bill was an intrusion on the ability of employers to communicate with potential employees.

Markley is unique among the three candidates for lieutenant governor. Democrat Ned Lamont and independent Oz Griebel courted their running mates, while Stefanowski was neutral in the three-way primary won by Markley.

Stefanowski says he is happy to run with Markley, though their paths rarely cross in public. At a debate Wednesday night, Stefanowski said he was open to changing election law so that major-party gubernatorial candidates could choose their running mates.

(Even in the case of Lamont and Bysiewicz, there was no guarantee they would end up as running mates, even though she was Lamont’s pick. They each had to win separate Democratic primaries. Only in the general election do voters cast a single vote for a ticket.)

Markley was criticized during the GOP primary and again Thursday during the debate for his vote in 2016 against the so-called “yes means yes” bill. It made affirmative consent the standard for college campus disciplinary proceeding involving allegations of sexual assault, though not for criminal prosecutions.

Markley said his opposition stemmed from concern about how the law would work, not the strong statement it made that all sexual relations on college campuses should be consensual.

“It’s a complicated issue, but I would invite people who have concerns about it to look at exactly what this bill involves in telling universities how to handle these things,” Markley said.

Frank and Bysiewicz disagreed on no specific issues Thursday. Instead, Frank tried to separate himself from Bysiewicz and Markley on the basis of backgrounds and approach to governing He and Griebel are outsiders who promise a non-partisan approach to government, while Markley and Bysiewicz are conventional politicians, even if both is running with a gubernatorial nominee from the world of business, not politics.

Bysiewicz, a former secretary of the state who was a gubernatorial candidate before joining forces with Lamont, and Frank both contrasted their support for abortion rights with the positions taken by Stefanowski and Markley. The Republicans support requiring minors to notify parents or get the consent of parents before an abortion. Connecticut is among the minority of states without such provisions, which are permitted under the legal groundwork established by Roe v. Wade.

Frank said Markley’s positions on abortion and affirmative consent places him in pursuit of “an extremely right-wing agenda.”

Markley said support of parental notification was a mainstream position, not a radical one.

Bysiewicz said parental consent sounds reasonable, but pointed out that minors seeking abortions often are from dysfunctional or even abusive families, where an unwanted pregnancy may be the result of rape by a relative

“In theory, parental consent might sound like something that would be good,” Bysiewicz said. “As a practical matter it is impossible for a lot of young women who are in this kind of situation.”