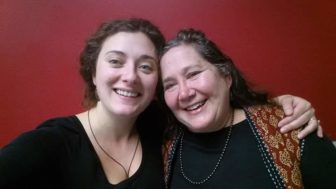 Linda Yanonne, one of the Connecticut residents who has benefited from Medicaid expansion, and her daughter Corianna.

Connecticut saw one of the biggest drops in the uninsured rate among low-income adults living in rural areas and small towns compared to other states, according to a national study released this week.

The uninsured rate for low-income adults (below 138 percent of the federal poverty level) has fallen since 2008-09 in nearly all states, but small towns and rural areas of states, including Connecticut, that have expanded Medicaid have seen the sharpest declines, according to the study by the Georgetown University Center for Children and Families and the North Carolina Rural Health Research Program. The study examined the status of insurance coverage for low-income adults in the 46 states with significant rural populations.

The uninsured rate for this population dropped sharply from 35 percent to 16 percent in rural areas and small towns (identified as “non-metro counties” in the study) of Medicaid expansion states compared to a decline from 38 percent to 32 percent in non-expansion states between 2008-09 and 2015-16.

Non-metro counties in the report are defined as having no urban centers or no center with more than 50,000 people. The other seven Connecticut counties — Fairfield, Hartford, New Haven, Tolland, Middlesex, Windham and New London — are considered metro counties. 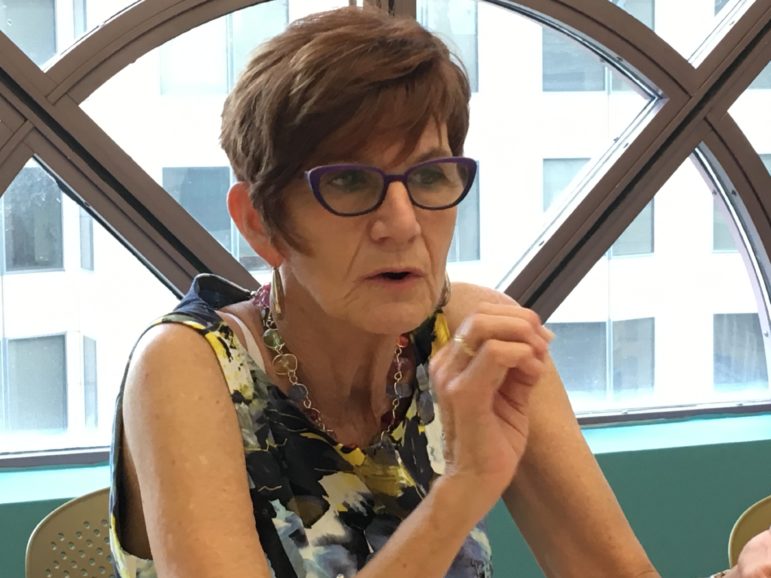 Patricia Baker, president and CEO of the Connecticut Health Foundation

“I am aware Medicaid expansion has made a tremendous impact on coverage in Connecticut,” said Patricia Baker, president and CEO of the Connecticut Health Foundation. “I had no idea that our rural rate would go from 32 percent uninsured to 9 percent. That’s a stunning finding.”

Joanne Borduas, CEO of the Community Health and Wellness Center of Greater Torrington, a community health center that serves residents in Litchfield County, acknowledged that having insurance makes accessing health care much easier.

But, said Borduas, a lack of insurance is only one reason people may not get preventive health care or manage their chronic conditions.

Borduas said those social determinants can be even more severely lacking in rural areas.

More and more health care providers and institutions in Connecticut, like the Community Health and Wellness Center, are employing case managers to help connect their patients to social services.

“It is treating the patient holistically and addressing all factors contributing to their health and wellbeing, not just the physical condition,” Borduas said.

In the seven metro counties in Connecticut, according to the study, the uninsured rate for low-income adults fell from 22 percent to 11. For all counties, the change was 23 percent to 11.

Sherman resident Linda Yannone is one of the people who lives in a metro county and who benefited from Medicaid expansion in Connecticut. Sherman, a small, rural town, is in northern Fairfield County.

When Yannone’s husband lost his job at a car dealership in 2006, they lost their health care coverage too.  And although they bought private health insurance, the cost of premiums drained their savings and they had to stop paying for it. This was especially difficult because Yannone is a cancer survivor and lives with lupus, an autoimmune disease.

“I was facing complete uncertainty about how I was going to care for myself going forward,” she said, adding that she was forced to pay for her health care out-of-pocket, which meant rationing her medications at times and accepting free care when it was offered.

All that uncertainty changed when Yannone became eligible for HUSKY D, the state’s expanded Medicaid program.

“That was the greatest relief in the world,” said Yannone, now 58. “Just being able to have peace about my health care, my medications, and my preventive care, it made all the difference in the world.”

Although the results of the study are encouraging, Baker and Borduas both cautioned that even with health insurance, transportation remains a large barrier to health care in rural areas.

Connecticut expanded Medicaid under the Affordable Care Act in mid-2010. This extended coverage to low-income adults who did not have minor children and were not disabled. This was only a partial expansion — it covered people earning up to 56 percent of the poverty level, with a slightly higher income limit for Fairfield County.

The state then expanded eligibility to 138 percent of the federal poverty level on Jan. 1, 2014. On this date, “generous” federal funding first became available for expanded Medicaid coverage, according to the study.

Before the expansion, most low-income adults who did not have minor children did not qualify for Medicaid. There was a separate state-funded program that provided medical assistance for very low income people who had extremely limited assets, called state-administered general assistance, known as SAGA. It covered roughly 46,000 people who were then moved into Medicaid.

Medicaid has played a key role in lowering the percentage of Americans who lack health insurance. Nationally, the uninsured rate for all Americans under the age of 65 (adults and children) fell dramatically between 2010 and 2016 from 18.2 percent to 10.4 percent, rising slightly to 10.7 percent in 2017, according to the study.

Expansion of Medicaid coverage and the new availability of subsidized private insurance from the health care marketplaces helped drive down the uninsured rate, the study said.

States that have not expanded Medicaid coverage to adults below 138 percent of the federal poverty line, regardless of their age and family circumstances, have many more uninsured adults, the study found.