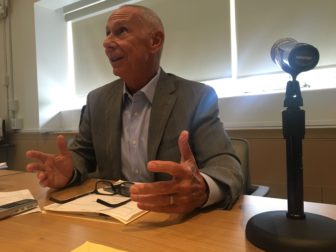 Mark Ojakian, president of the Connecticut State Colleges and Universities system, talks to reporters after the meeting Wednesday.

Officials at the state’s largest public college system are exploring new tuition and fee policies aimed at incentivizing students to complete their degrees – however, fiscal constraints will likely stifle these costly ideas.

On Wednesday, members of the Regents’ finance committee agreed that their current trajectory has them needing to either significantly cut spending or land additional state aid. However, the state is facing deficits of its own and the system will likely need to brace for a continued loss of funding and the priorities of a new administration.

State funding for the 84,000-student system would need to grow by $41 million next year – and by another $30 million in the 2020-21 school year – to maintain current programs and provide new programming and advisors. And that projection hinges on the board ordering another two-year package of tuition hikes, matching the increases imposed this school year and last.

The finance and infrastructure committee unanimously endorsed requesting additional “expansion option” money from the state when it met Wednesday. The Office of Policy and Management requires all state agencies to submit their biennium proposals in October.

Mark Ojakian, president of the Connecticut State Colleges & Universities system, said consistent cuts to the system have forced officials to trim positions despite efforts to reduce operating costs. He described the request for further additional funding as addressing “extremely pressing needs that we have in the system and for our institutions.”

Officials will request that funding to introduce programing to help community college students develop an academic plan early in their college experience and receive support to keep them on track and graduate. It would also go toward providing both community college  and state university students with more professional and academic advisors.

The finance committee also introduced a number of tuition and policy options for the next two fiscal years, while noting officials will only vote on a final proposal next spring. This is the beginning of a discussion that will take months.

Some of those options include freezing current tuition and fee rates for a two or four-year period, holding those rates flat for full-time students (for three years at the colleges and five years at the universities), exploring free education for qualifying students, and offering graduates a rebate on a portion of the total cost of their education.

Ojakian said the options are only a sample of what the regents may consider.

“I thought it was important to start a conversation about what should our tuition policy be into the future as opposed to more of an ad hoc approach that we had in the past,” Ojakian said.

The committee said a tuition and fee rate freeze would create an estimated $15.7 million gap in fiscal year 2020 and a $31.9 million gap the next fiscal year, all while assuming flat enrollment during that time despite a declining trend.

The CSCU president said the board will hopefully endorse a white paper with a more refined set of options in November, which will head to the new governor, his administration, and legislative leaders. Ojakian said he wants to pursue options that incentivize students to stay in school and complete their degrees in a timely fashion.

“I want to be more proactive about having a tuition policy that is not predicated just on expenses but is predicated on our ability to ensure student success and continue to make our institutions affordable and accessible,” Ojakian said.

This story has been updated to clarify the discussion at Wednesday’s meeting.