FBI report splits Congress along party lines; Blumenthal calls it a ‘cover up’ 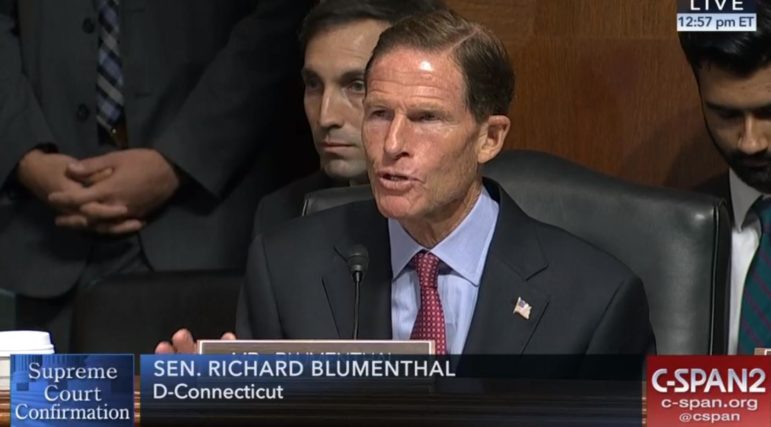 Sen. Richard Blumenthal: “Smacks of a cover- up.”

Washington – The finished FBI investigation of sexual assault allegations against Supreme Court nominee Brett Kavanaugh has deepened the divisiveness in Congress instead of bringing clarity to an issue that has roiled  the nation.

Sens. Richard Blumenthal and Chris Murphy joined other Democrats Thursday in saying the FBI’s report raised more questions than it answered and was a rush job that failed to include interviews with people who could corroborate the stories of Kavanaugh’s accusers.

Blumenthal also said the FBI “was a whitewash” and “smacks of a cover up.”

The White House limited the scope of the FBI investigation — conducted as an expansion of the judge’s background check and not a full-blown criminal investigation — to certain witnesses and to the allegations of sexual assault. The FBI was proscribed from asking witnesses about Kavanaugh’s truthfulness about his drinking or other behavior as a high school or college student.

“I just came from that secure briefing room where I was force fed a half-baked FBI investigation that I was told I had to read and digest in no more than an hour.” It was humiliating. I felt like I was nine years old.”
Sen. Chris Murphy, D-CT

After reading the confidential report, Republicans said the six-day investigation was thorough and complete and did not include any evidence of wrongdoing by Kavanaugh.

Sen. Susan Collins, R-Maine, one of three Republicans who have not indicated how they plan to vote, said  “it appears to be a very thorough investigation.”

The FBI report will not be made public and those with clearance to read it can’t discuss it with others or make its findings public.

“We are limited in what we can say about it,” Blumenthal said.

A single copy of the document, with transcripts of interviews with witnesses attached, was kept in a secure room in the U.S. Capitol complex. Only 109 people have clearance to read it, 100 U.S. Senators and nine members of the Senate Judiciary Committee staff.

“I just came from that secure briefing room where I was force fed a half-baked FBI investigation that I was told I had to read and digest in no more than an hour,” Murphy said on the Senate floor Thursday afternoon. “It was humiliating. I felt like I was nine years old.” 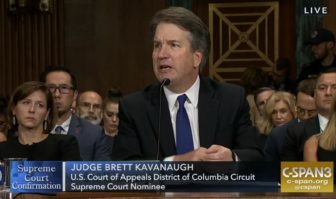 The FBI was told by the White House to refrain from interviewing the two central characters in the drama, Kavanaugh or Christine Blasey Ford, Kavanaugh’s first accuser who said the judge sexually assaulted her at a house party when they were both in high school.

Although Blumenthal said dozens of more witnesses should have been interviewed by the FBI, and that  the probe was “not conducted in good faith,” he said the limited probe bolstered the allegations made by Deborah Ramirez, a Shelton native who accused Kavanaugh of exposing himself to her during a drinking party in a Yale University dorm room when they were both freshmen. Ramirez’s story was made public in a New Yorker story on Sept.23

Blumenthal said he was restrained from saying whether the FBI’s two-hour interview of Ramirez brought other information to light.

“But FBI interviews generally contain more details than statements made in the context of [a media] interview,” he said.

Ramirez told the New Yorker Wednesday that she was “very alarmed.”

“First ,I was denied an F.B.I. investigation for five days, and then, when one was granted, that it was given on a short timeline and that the people who were key to corroborating my story have not been contacted,” Ramirez said. “I feel like I’m being silenced.”

Blumenthal said the FBI report should be made public, with redactions of personal information, including medical issues those interviewed might have.

Both Blumenthal and Murphy announced their opposition to the nominee, on the evening in July that President Donald Trump disclosed he’d picked Kavanaugh to replace retiring Justice Anthony Kennedy.

The senators said they rejected the nominee based on his past rulings as a federal appeals court judge, and were even more strongly opposed to Kavanaugh’s confirmation after the allegations of sexual assault were made public and an angry Kavanaugh attacked Democrats during a hearing last week, calling them an “embarrassment,” and warning “what goes around comes around.”

“I have come to the conclusion that Brett Kavanaugh is the most dangerous nominee to the Supreme Court in my lifetime,” Murphy said. 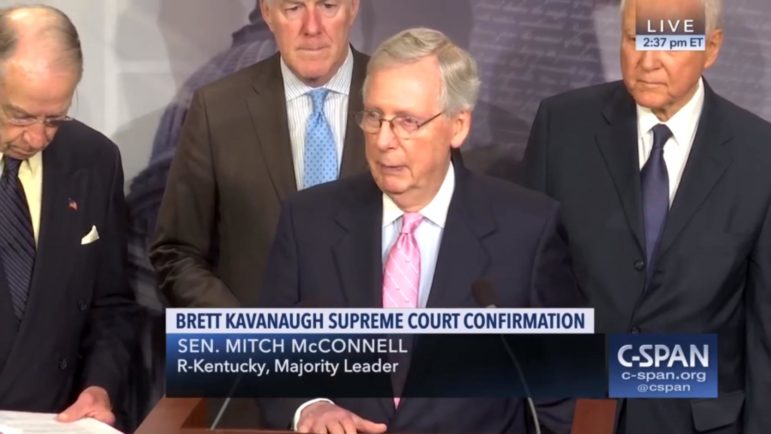 He said he was disturbed that the allegations of sexual abuse came at the last minute, but said “if there’s a chance he did these things,” Trump should “move on to the next candidate” on his Supreme Court short list.

Senate Majority Leader Mitch McConnell, R-Ky., emphasized that Kavanaugh is “innocent until proven guilty” and must be confirmed since the FBI probe found no corroboration of the sexual assault claim by Ford.

McConnell has scheduled a procedural vote on the nominee Friday and a final Senate vote on Kavanaugh’s confirmation Saturday.

Blumenthal said he would try to convince Collins, Flake and Sen. Lisa Murkowski, R-Alaska, the third undecided GOP senator, to vote “no” on Kavanaugh.

“It’s not over until it’s over,” Blumenthal said.

House Democrats tempered their income tax relief plan for households with children to ensure the program continues year after year.