Republican Harry Arora, who is challenging Jim Himes, with his family.

The race for the 4th District congressional seat pits political novice Harry Arora, a Republican who says he backs most of Donald Trump’s agenda, against a Democratic incumbent, Rep. Jim Himes, who has the political winds at his back.

“I am not a career politician, I am a problem solver,” Arora said.  “My focus is very practical – getting things done.”

An immigrant from India turned multimillionaire, Arora, 48, is running to represent a district known for its wealth and Wall Street commuters. Running along Long Island Sound, the district goes inland to encompass Redding and Oxford. Once considered a swing district, it has been trending Democratic — with once-GOP strongholds like New Canaan and Darien supporting Hillary Clinton in the 2016 election.

Although he faces an uphill climb in trying to unseat Himes, Arora is passionate about the race and willing to put his own money into the campaign.

He said he thought about running for Congress for a long time. A recent battle with  kidney cancer and concerns about what he views as the weaknesses in Connecticut’s economy — including in the 4th District, which is located in Fairfield County  —  prompted him to declare his candidacy last year two days before Christmas.

“We are leaders and we have been reduced to nothing,” the Greenwich resident said of the state’s residents. ”Number One for me is a pro-growth, pro-economy agenda.”

Like Himes, who was once a Goldman Sachs executive, Arora comes from the financial world.  A graduate of the University of Texas at Austin who earned an MPA at Harvard, Arora is a partner in Northlander Commodity Advisors, a London-based firm that specializes in energy trading. In 2006 he founded his own energy fund, ARCIM Advisors.

To Arora, Himes is a do-nothing congressman who needs to be replaced by someone with “deep ideas” and ingenuity.

“If you go with the facts, people listen,” Arora said.

However, he admitted “perhaps I am very rosy” in thinking members of Congress, now deeply divided by partisanship, can be won over by good ideas.

Arora is seeking political office for the first time in his life during a year in which polls show Democrats are favored in generic ballots to win U.S. House races. He is also running in a district political analysts rank as “safe Democratic.”

“The district seems uniquely bad for Republicans in a cycle like this – high income, high education, and hostile to the president,” said Kyle Kondik of the University of Virginia Center for Politics.

Kondik notes Hillary Clinton won more support in the district in 2016 than Obama did in 2012, indicating a Democratic trend.

Arora is also running against a lawmaker who excels in raising campaign cash. Himes had nearly $3 million in his campaign war chest on June 30, the last time campaign finance reports were filed with the Federal Elections Commission. Arora reported raising about $721,000 in the same time period; $500,000 was a personal loan to his campaign.

Yet Arora’s background, the sophistication of his campaign – Arora is running a television commercial, Himes as yet has not – and the willingness to self-fund his campaign makes the Republican “a credible candidate,” said University of Connecticut political science professor Ron Schurin.

As an Asian immigrant, Arora is also expanding the Connecticut GOP’s base of candidates, Schurin said. 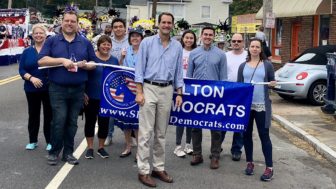 He’s won re-election easily since then. But Himes said campaigning this year is different, not because of Arora, but because of President Trump.

“This is the first time I’ve ever run with Donald Trump as president,” he said. “That’s a dynamic that is sucking all the air out of the room.”

He said he usually puts the 4th District’s transportation woes “front and center” of his re-election campaigns.

“Women are especially fired up,” he said. “One of the hardest aspects of my job since Trump was elected has been dealing with the fear and revulsion of my constituents, especially women. They would come up to me in tears. I had to offer comfort. That’s not the traditional congressional job description.”

Himes said he campaigns on the prospect that Democrats have a good chance of retaking the U.S. House of Representatives in the midterm elections. And if they do, Himes said he will be a member of a Democratic majority that serves as a “check” on the president.

A leader of the centrist New Democrat Coalition, Himes said a Democratic takeover of the U.S. House – which would happen if the party flips at least 23 seats – would also open the door to “some deal making” with Republicans and the White House. More federal funding for transportation is one of the areas in which he’d like to find common ground.

Like most Democrats, Himes is also campaigning on health care this year, blasting GOP promises to protect one of the popular aspects of the Affordable Care Act, even as Republican lawmakers and Trump continue to seek to repeal and shred the health care law. Despite wanting to abolish the ACA, Republicans say they will keep protections for people with pre-existing health conditions who, before the law was implemented, were often denied coverage by insurers.

“It’s like saying you are going to live a long life eating candy and junk food – it’s dishonest,” Himes said.

Himes is known for his witty, often cynical tweets, especially those that lambaste Trump and congressional Republicans. Himes posted this tweet during the partisan fight over the confirmation of Supreme Court Justice Brett Kavanaugh:

GOP: Due process?!? LOCK HER UP

Although Himes is running against Trump, he’s also defending himself against Arora.

He said voters don’t really know who Arora is yet, and when they do,  they will be disappointed.

“Wait until they find out (Arora) favors legislation that blows up the deficit,” Himes said.

The legislation to which Himes is referring is a massive GOP overhaul of the U.S. tax code that the Congressional Budget Office says will increase the federal deficit by $1 trillion by 2020.

Arora said he supports the new federal tax law, but not the provision that capped the deductibility of state and local, or SALT, taxes, which hits high-earners in Fairfield County with expensive homes especially hard.

“I would confront (Trump) on things that do not benefit our community,” Arora said.

But he said he supports most of Trump’s agenda, with some slight differences. On immigration, for instance, Arora said he favors building a “partial wall” along the U.S.-Mexico border, putting up barriers only where they are necessary, and using money saved from that limited construction to bolster border security in other ways.

Arora said he came to the United States in his 20s with “no family, no connections and no money.”

Besides surviving cancer, Arora also suffered from the implosion of Enron, where he was once a trader.

“I lost my savings,” Arora said.

He rebounded magnificently, according to the candidate’s financial disclosure forms which show him owning millions of dollars in stocks, real estate holdings and other assets. He has  channeled some of that drive into politics.

“We need our elected officials to bring new ideas to solve problems and new skills to get things done,” Arora said. “I am a man of faith and I’m a fighter.”

He derided Himes as a “major in Latin American studies,” in college. Besides his MPA, Arora has an undergraduate engineering degree.

Himes, a Harvard graduate, earned that Latin American studies degreee as a Rhodes Scholar and became a banker in Latin America for Goldman Sachs. He was born in Lima, Peru to American parents, moving to the United States after his parents separated.

Himes quit Wall Street to work for a nonprofit that helped low-income people procure housing. He began his political career as a member of the Greenwich Board of Estimate and Taxation.

Besides serving on the House intelligence panel, Himes sits on the House Financial Services Committee and is often the “go to” guy when his colleagues need help understanding legislation that pertains to financial matters.

Himes split from most House Democrats in sponsoring and supporting bills he said “reform” the Dodd-Frank law, which imposed new regulations on banks and financial institutions after the 2008 Wall Street crash. Critics say Himes helped weaken the law, but the lawmaker says the changes are needed and that he strongly opposes an “across the board” rollback of Dodd-Frank, as some Republicans seek.

A flashpoint in the Himes-Arora race involved candidate debates. Arora asked Himes to debate him 10 times because Himes managed to get Shays to agree to that many debates.

“We feel really upset about that,” said Arora. “The amount of contempt his campaign has shown us is really unfair.”