The gunman who killed 20 elementary students and six educators at Sandy Hook Elementary School a few years after he graduated from the school district showed “remarkable progress” due to the special education services he received while in school, according to two former officials from the school system.

The officials, who worked for Newtown Public Schools,  made the claim about the services provided to Adam Lanza in a report they released Thursday, almost six years after the massacre Lanza committed at the Sandy Hook Elementary School.

The authors of the report – Michael Regan, the district’s director of pupil services from 2003 to 2012, and Janet Calabro, special education supervisor from 2004 to 2011 – offered it as a direct rebuke to the conclusions of the report by the state Office of the Child Advocate, which found that the school district did not address numerous red flags and failed to provide appropriate supports to the shooter while he was in school.

The Office of the Child Advocate issued a statement Thursday saying it has received the report and will review it before responding.

The educators gave the report to Republican state Sens. Henri Martin and Kevin Witkos on Thursday, asking that it be included in the state’s record of what happened at Sandy Hook.

The authors of the report point to the significant anxiety that Lanza had about school – which resulted in his mother withdrawing him for a year – to him returning to school, getting involved in extracurricular activities, taking college-level classes and eventually graduating and getting a job through the schools’ Job Coach program.

The special educators point out that even though his mother wanted to home school him, staff was able to convince her to do “homebound” school where they could still be involved. The following year, staff got Lanza to return to school.

“Given his state of significant anxiety and isolation AL’s progress from 7th grade to his graduation was remarkable and more than ‘short lived,” wrote the two former officials in a 22-page report. “This progress did not appear in a vacuum. … It would have been much easier for the school district to go along with Mrs. Lanza’s desire to homeschool her son, especially with a psychiatrists’s report supporting that desire.”

A team of mental health staff assembled by the child advocate concluded in 2014  that there were many red flags in the shooter’s life that weren’t fully addressed or identified by his family or school.

That report – written by the child advocate and mental health staff after reviewing thousands of documents including medical and students records and conducting dozens of interviews – cited education deficiencies in 19 of the report’s 37 “key findings.”

Findings ranged from Lanza only receiving “limited” services in elementary school, to his communication and social-emotional skills never being properly identified. There were disturbing writings from the shooter at a young age – including the “Big Book of Granny” that included “intense violence” beyond what most children would know to invent – that were never referred to mental health professionals.

The child advocate says the Yale Child Study Center, who evaluated him in ninth grade, was the only one who “seemed to appreciate the gravity of AL’s presentation, his need for extensive mental health and special education supports.”

That report from Yale described profound concern about Lanza who, at the time he was evaluated, wouldn’t shake hands, look people in the eyes, or talk on the phone and use e-mail.

“We are very concerned about AL’s increasingly constricted social and educational world,” the Yale report said. “We believe it is very important to reframe the discussion with school from issues of curricular content to much more urgent issues of how to accommodate AL’s severe social disabilities in a way that would permit him to be around peers and to progress, rather than regress, socially, as well as academically.” 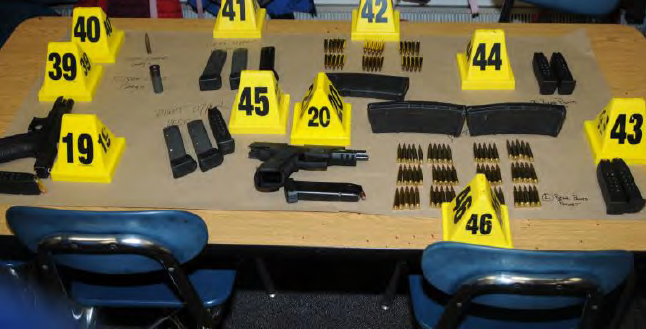 Regan and Calabro dispute whether the district ever received the Yale report or the disturbing writings, saying that was not clear. On Lanza not receiving services for social-emotional skills in elementary or middle school, they say it is not certain he ever showed signs he needed them.

“If there were not increased social-emotional challenges being observed by elementary school personnel or reported to them, it is logical for AL not to receive direct services targeting this area,” they write, pointing out that there is no evidence to suggest that the shooter ever showed aggressive behavior while at school before the December 2012 shooting.

They also attack the validity of the child advocate’s report, saying Regan, the director of special services, was never interviewed. They also question why some of the contributors were allowed to participate, despite their ties to Yale. However, Regan and Calabro don’t specify who they mean, and the only named contributor who lists a tie to Yale works at the hospital, not the Yale Child Study Center.

The authors of the report also take issue with the participation of former state Rep. Christopher Lyddy, a social worker who filed a complaint with the state the year before the shooting about special education services being provided in the district.

“We are offended by any insinuation that our skills as educators and clinicians or that of our staff and contracted consultants are substandard to those of outside service providers and remain unapologetic in our capacity to responsibly provide our students with a free appropriate public education,” write Regan and Calabro.

Instead, they place the blame on what happened to Lanza during the three and a half years after he graduated.

“By the time of his graduation (June 2009), he had been fully mainstreamed,” they write. “…After AL graduated from high school, there is ample evidence that AL’s mental health deteriorated. There is also evidence that Mrs. Lanza tried to find adult services and treatment for her son… Connecticut, like many states, has a lack of services for high school graduates and young adults who struggle with mental health challenges.”

“Connecticut is ready, and we’ve been ready for a while,” Gov. Ned Lamont said Wednesday.

While Connecticut has the fifth lowest rate of gun deaths in the nation, we still have an unacceptably high level of gun homicide. Although the number of deaths has come down substantially since the 1990s there were 72 gun homicides in 2019, on average more than one a week. The deaths are concentrated in our largest cities: gun homicides in Bridgeport, Hartford and New Haven accounted for two-thirds of 2019 statewide gun homicides. Black men are disproportionately the victims, killed by guns at 25 times the rate that non-Hispanic white men are.

One of Connecticut’s unhealthy “steady habits” is the achievement gap between wealthy, suburban schools and their counterparts in the cities. It’s among the worst in the nation, but the governor and legislature remain at odds on major structural changes to address the challenge externally. State Education Commissioner Miguel Cardona tells host John Dankosky he hopes […]