Washington – If they win re-election, Connecticut’s delegation to the U.S. House would enjoy a power surge should Democrats take control of that chamber in November’s election.

A blue wave that wrests control of the U.S. House from the GOP would steer the Democratic lawmakers — who are favored to win another term — out of the political wilderness they’ve inhabited since 2011, when their party lost control of the chamber.

Specifically, it could lift members of Connecticut’s delegation into leadership positions on subcommittees of key House panels, including the Appropriations Committee, the Ways and Means Committee, and the Armed Services Committee.

Rep. Jim Himes, D-4th District, would also be in line to head the House Intelligence Committee, which is expected to open several investigations into the Trump administration if Democrats win control of the House.

While Connecticut’s Democratic lawmakers would have a higher political profile and a new ability to hold hearings and schedule votes on key issues if the U.S. House flips, November’s elections could result in a divided government, with the GOP likely to continue to control the U.S. Senate and a Republican president still in the White House.

That means there would be limitations on the Connecticut delegation’s new political clout, and a likely increase of the gridlock that has long defined politics in the nation’s Capitol.

“House Democrats will decide which bills get a hearing and a vote, but they will control just one chamber in an institution that’s just one branch of a system of checks and balances,” said Robbin Smith, head of the political science department at Central Connecticut State University.

While congressional races have been tightening as the November 6 election gets closer, analysts still believe the U.S. House may trade hands.

Rep. John Larson, D-1st District, would likely take over the subcommittee in charge of Social Security policy if he serves in a Democratic-controlled House.  That would allow him to advance a pet project – a bill to reform the retirement program.

“If we are fortunate enough to take back the House in two weeks, and I pick up the gavel as the chairman for the Ways and Means Social Security Subcommittee …the focus will be clear,” Larson said. “For too long we have allowed the Republicans to control the message on programs like Social Security and Medicare – calling them ‘entitlements’ when any working American knows they have earned their benefits with their every paycheck.” 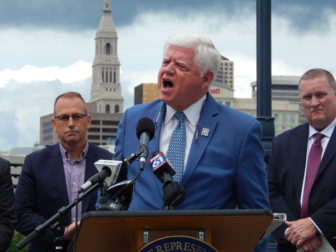 Larson also said a Democratic takeover of the Ways and Means Committee would lead to a revisiting of the GOP federal tax overhaul “which double taxes middle class families in donor states like Connecticut through an arbitrary limit on the state and local tax deduction, to pay for things like a giant tax break for billionaire estates.”

He also said he would propose a “pollution tax” to pay for new infrastructure, including his I-84/I-91 tunnel proposal in Hartford.

“We need to think big again and that’s what I know we will do should we be in the majority next year,” Larson said.

Rep. Rosa DeLauro, D-3rd District, would become a “cardinal,” or chairman of a House Appropriations subcommittee. That subcommittee would help determine the budgets of the Labor Department, the Department of Health and Human Services and the Education Department, allowing DeLauro to influence health and social service programs run by those agencies and bolster her efforts to prevent pay discrimination.

“If Democrats win the majority, the biggest impact we will have is by finally being able to implement an agenda for working people and the middle class to get ahead,” DeLauro said. “The biggest economic challenge of our time is that people are in jobs that do not pay them enough to live on. Workers are struggling with the rising costs of health care, child care, and housing. Meanwhile, wages have been flat for decades.”

DeLauro also said, “If I were to become chair of the Labor, Health and Human Services, and Education Subcommittee, I would also focus on securing critical investments in programs that help people,” including “groundbreaking medical research and child care grants to job training and education programs.”

“It would be the honor of a lifetime to directly oversee this subcommittee and fight to increase funding for these national priorities,” DeLauro said.

DeLauro, who has represented a New Haven-based district since 1991, and Larson who has represented the Hartford area since 1999, will be among the most senior Democrats in the U.S. House next year if they win re-election. Influence grows with seniority in that chamber.

DeLauro said she would like to continue in her leadership role in the new Congress. 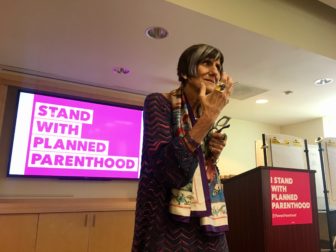 “I would be honored to serve in the Democratic leadership as co-chair of the Steering and Policy Committee if I am elected to serve again,” she said.

DeLauro, however, was appointed to that position by House Minority Leader Rep. Nancy Pelosi, D-Calif., and there’s been a movement among House Democrats to seek new, younger, leadership in the next Congress.

A flip of the House would likely propel Rep. Joe Courtney, D-2nd District, into the  chairmanship of a House Armed Services subcommittee in charge of the Navy’s sea power, including submarines made by Electric Boat and home ported at the Naval Submarine Base in New London.

Himes, who represents the southwestern part of the state, is now the second-most senior Democrat on the House Intelligence Committee. Pelosi has recently said it’s “up to the caucus” to select its next House Democratic leader. While Pelosi said she does not plan to step down immediately, she has suggested that Rep. Adam Schiff, D-Calif., the only Democrat on the intelligence panel with more seniority than Himes, might be a good candidate to replace her as the Democratic leader.

Schiff’s ascension would open the way for Himes to lead the Intelligence Committee should Democrats take the House. That committee would likely join the House Judiciary Committee and House Government Affairs Committee, and possibly other panels, in initiating a number of probes.

“I fully expect (Democrats) will launch investigations not only into the Trump administration, but also into Justice Brett Kavanaugh,” said Smith, of the CCSU political science department.

Himes said his role on the Intelligence Committee would be decided by the Democratic leadership.

The lawmaker, who is running against Republican Harry Arora, would also rise in seniority on the House Financial Services Committee if he serves in a Democratic House in the next Congress.

With Rep. Elizabeth Esty’s retirement, the 5th District will be represented by a freshman lawmaker in the next Congress.

The election will decide whether Democrat Jahana Hayes or Republican Manny Santos wins the open seat. If elected, Santos said he’d like a seat on the Ways and Means Committee, House Armed Services Committee and Veterans Affairs Committee.

The Ways and Means Committee is considered one of the most prestigious and powerful positions in the U.S. House and is generally not open to freshmen, but that’s more possible if there is high turnover as the result of November’s elections.

Hayes has said it is too early for her to determine what committee assignments she would seek. But the former national Teacher of the Year said she wants to be involved in federal education policy.

While Democrats, including those in Connecticut’s congressional delegation, will be able to move their agendas forward if the House flips, Smith said “I’m not sure anything will be accomplished” because Republicans are likely to hang on to control of the Senate and ignore House Democratic initiatives.

“But (a divided Congress) would certainly allow voters to see the difference between the parties on health care and other issues,” Smith said.

Sen. Chris Murphy arguing against repeal of the Affordable Care Act on the Senate floor.

While Democrats have a chance of regaining control of the U.S. House, Republicans are more likely to keep control of their narrow 51-49 majority in the Senate, and may even add to that majority.

That’s because the  Senate electoral map is extraordinarily tough for Democrats this year. Democrats are defending 26 seats; Republicans only eight.

In addition, many of the Senate Democrats on the ballot are in deep-red states like Missouri and North Dakota that voted for Trump by double digits in 2016.

Sen. Chris Murphy, D-Conn., is running for re-election this year against Republican Matthew Corey, but his seat is considered to remain safely Democratic.

If the Senate were to flip, and Murphy wins re-election, he would likely become chairman of a Senate Foreign Affairs subcommittee with oversight of European affairs – and Russia. He’d also move up on the Senate Health, Education, Labor and Pensions Committee and increase his seniority on the Senate Appropriations Committee.

Sen. Richard Blumenthal, the only member of the Connecticut delegation who is not up for re-election this year, would increase his seniority on the Senate Commerce, Science and Transportation Committee, the Senate Judiciary Committee and the Senate Veterans Affairs Committee.