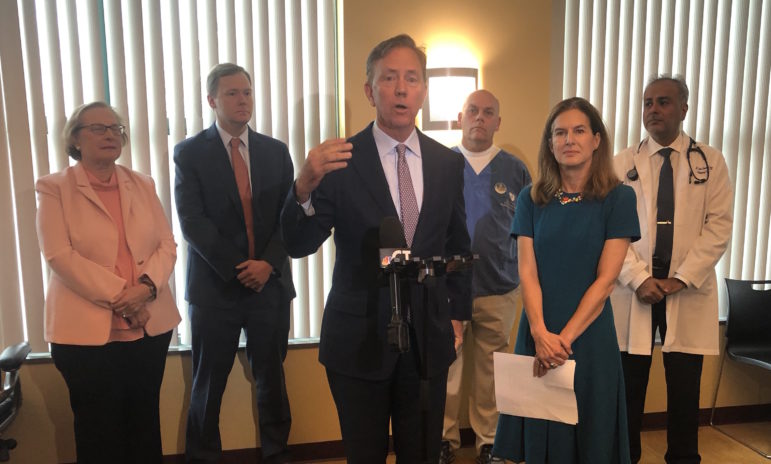 Ned Lamont criticizes Bob Stefanowski for comments he made about childhood vaccinations.

Surrounded by medical providers and state legislators, Democrat Ned Lamont on Wednesday attacked Republican Bob Stefanowski for comments he made about childhood vaccinations during a campaign event this summer.

NBC Connecticut obtained the video of Stefanowski from a source working for Democratic campaigns in Connecticut. The video is two minutes long, and does not include what is said before or after the two-minute portion on immunization policy, according to the NBC Connecticut report.

In the grainy video, Stefanowski was asked whether he thinks the state or local boards of education should dictate vaccinations.

Stefanowski responded by saying, “I think it depends on the vaccination … I mean, you know, we shouldn’t be dumping a lot of drugs into kids for no reason.”

He also says in the video, “I don’t think we should be forcing people to inject a ton of chemicals into their kids but I would want to see more about it.”

Lamont, at a press conference in Hartford on Wednesday, blasted Stefanowski for those comments.

“One of your jobs as a governor is to think about the public health and make sure that your kids are safe when they go to school,” he said. “It’s just grossly irresponsible to dismiss that.”

Stefanowski spokesman Kendall Marr told NBC Connecticut in a statement earlier this week: “Bob’s position here is in line with the law. While he believes that the best practice is to vaccinate your children, he does not believe that the government should be able to legally force you to do so.”

On Wednesday, Marr said in a statement that Stefanowski’s comments were taken out of context and that the GOP nominee for governor “fully supports current policy on vaccines. He is not seeking any changes to those requirements.”

Marr said Stefanowski’s comments came after an attendee claimed children were being required to undergo around 50 vaccines to attend school, which Marr said is much higher than what is required by the state and what is recommended by federal agencies and medical organizations.

“At no point did he say we shouldn’t be giving the necessary vaccinations required by state law and recommended by the experts,” Marr said. “In fact, he refused to commit to a bill loosening vaccination requirements in the video. Bob believes that immunizations are an important part of protecting public health.”

According to NBC Connecticut, Stefanowski also said on the video that his three daughters were vaccinated.

The NBC story caught the attention of national media outlets on Tuesday, resulting in what was probably unwelcome attention for the Stefanowski campaign.

Even Chelsea Clinton weighed in on Twitter, reposting a story from The Daily Beast about the video and listing diseases prevented by vaccines.

“They make it very clear that he and Joe Markley are not prepared to lead and govern,” she said. “If you’re not willing to listen to the medical community, to scientific evidence and you only pander to an extremist radical few people in our state, it means you’re not ready to lead.”