Hayes says she’ll support Pelosi, so do all other CT lawmakers 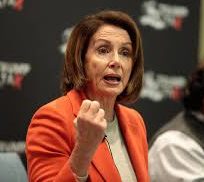 Washington – After saying during her campaign that she would not back her bid to lead House Democrats in the next Congress,  Rep.-elect Jahana Hayes on Tuesday said she will support embattled House Democratic leader Nancy Pelosi.

“You can’t beat someone with no one, and the fact is that voting against Pelosi on the floor is a vote for the Republicans,” Hayes said. “The American people sent Democrats to Congress so that we would fight for the values they care about and to act as a check on this Administration.  Voting against Nancy Pelosi accomplishes neither of those goals. In fact, it undermines them.”

House Democrats, who won the majority in the midterm elections, will hold their leadership elections amid an uprising by a group of veteran Democrats and incoming freshmen who want change.

Democrats who will serve in the next Congress will vote behind closed doors for their leaders Wednesday and Pelosi hopes to be elected the Democratic candidate for Speaker of the House. Then the entire Congress will vote for its leaders after it is gaveled in in January. 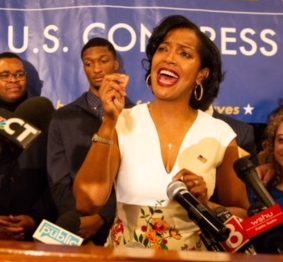 Jahana Hayes: “You can’t beat someone with no one…”

If Pelosi loses the caucus vote, another Democrat would eventually prevail as the party’s choice for Speaker of the House.  But no one has publicly declared a candidacy.

Hayes’ support for Pelosi means all five members of the Connecticut congressional delegation are backing her bid to lead them.

A  previously undecided member of the delegation, Rep. Jim Himes, D-4th District, said on “CNN Newsroom” on Monday that it is “wrong” for her detractors to say that Democrats “can’t win with Nancy Pelosi.”

Rep. Joe Courtney, D-2nd District, announced his support for Pelosi last week. Reps. Rosa DeLauro, D-3rd District and John Larson, D-1st District, have been steadfastly  loyal to Democratic leader and helped her round up support from other Democrats.

In the statement announcing her support for Pelosi, Hayes said “during the primary I talked about the need for generational change within the Democratic Party.  It is something I believed then and still believe today. Simply put, if we don’t infuse the pipeline with the next generation of leaders now, it is to our peril.”

“I also said that I was not willing to make change just for the sake of making change – that we needed to build upon the work that came before, not just toss it aside,” she said.

But Hayes also said she came to Washington D.C. “with an open mind” and was “willing to listen, to hear where other members of Congress wanted.”