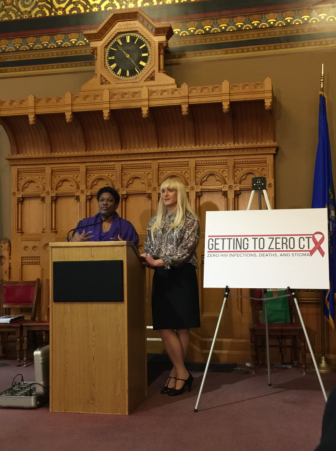 Latoya Tyson and Dr. A.C. Demidont, members of the Getting to Zero Commission speaking at the state Capitol Monday.

Black women are around 40 times more likely to be diagnosed with HIV than white women, yet many black women said in listening sessions around the state that they aren’t getting that message.

This is the kind of hurdle that state officials and advocates have worked to pinpoint in the first six months of work by Getting to Zero CT, a campaign to eradicate new HIV diagnoses in the state.

“We recognize that there are specific populations of folks that are way more vulnerable to HIV than others so by prioritizing them, that […] helps us to really focus on what their individual needs are,” said Latoya Tyson, associate director of prevention at AIDS Connecticut and a member of the Getting to Zero Commission.

On Monday, the commission presented a report to the Department of Public Health containing findings from listening sessions held around the state.

While HIV diagnoses have gone down steadily over many years, the progress is uneven, and has not reduced startling disparities in HIV rates that exist among many different subgroups.

Getting to Zero focuses on reducing these disparities in five cities with the largest number of people living with HIV: Bridgeport, Hartford, New Haven, Waterbury and Stamford.

By contrast, the risk for the overall population is around 1 for every 99. 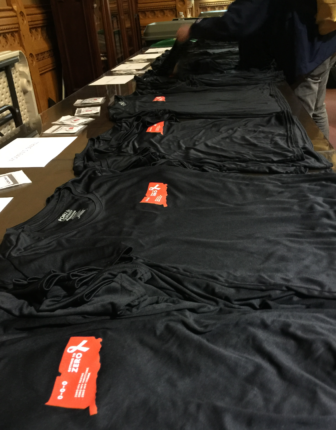 T-shirts with the Getting to Zero campaign’s logo, part of the outreach effort to eradicate new cases of HIV in Connecticut.

Since forming in July, the Getting to Zero Commission — made up of 23 members appointed by Department of Public Health Commissioner Raul Pino — has been busy.

The commission held listening sessions among  black women, transgender women, black men having sex with men, and in Hartford among Spanish speakers to better understand those groups’ perceptions and knowledge about HIV, prevention and treatment.

Getting to Zero also interviewed HIV health providers, created a marketing video for its campaign, and launched a bilingual Spanish-English website — all made public Monday.

“I am extremely proud of the work done over the last six months by the G2Z Commission to focus on the population groups and the areas in Connecticut where HIV continues to have a disproportionate impact,” Pino said Monday.

Broadly, common themes emerged: lack of access to a highly effective preventive medication, stigma, and lack of education — not just among the general community, but among health care providers.

But within each subgroup, and from city to city, these general kinds of barriers take on different forms.

In addition to not believing that public health messaging was aimed at them, black women in Waterbury and Stamford reported needing more acceptance and support from their churches.

In New Haven, “attendees were from a Black sorority and demonstrated high awareness about HIV in general. Much of the discussion focused on Black women’s HIV vulnerability and a general attitude of being exempt from HIV. They reported a lack of knowledge among Black women about HIV transmission, fear of testing, lack of funding to support women’s health, and young Black women’s lack of communication with their partners, which contributed to the prevalence of HIV. Images in commercials were felt to be misleading due to a lack of relatable Black women.”

Transgender women in Waterbury reported “a need for increased education and sensitivity from medical providers who are gender-affirming and knowledgeable about HIV.”

Men having sex with men in Stamford said condom use was not widespread and there needs to be a stronger marketing push around PrEP, or pre-exposure prophylaxis — a drug that can lower the risk of getting HIV through sex by more than 90 percent, according to the Centers for Disease Control and Prevention. People who inject drugs can cut their risk of HIV infection by at least 70 percent with PrEP.

Below is the marketing video released by Getting to Zero on Monday:

The first two recommendations in the Getting to Zero report were administrative — forming statewide and city-level structure to oversee the efforts.

Recommendation three focuses on PrEP education and access — not just educating the population at large, but also health care providers.

Providers lacking knowledge about HIV prevention and care was a common theme Monday.

“A primary care doctor in Waterbury who is taking care of African American women may not identify that that person is a candidate for prep or even discuss prep with that person even though they are a candidate for prep,” said Dr. A.C. Demidont, a physician whose practice focuses primarily on LGBTQ patients and who is a member of the Getting to Zero Commission. 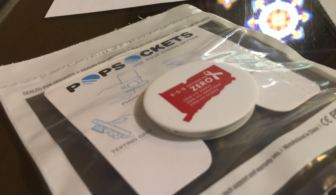 Smart phone-gripping Pop Sockets give-aways to help spread the word about Getting to Zero CT.

“For transgender women, for instance, they had presented to doctors multiple times and nobody had taken a sexual history, so that’s stigma,” Demidont said. “In these populations of people, providers either don’t have the education or don’t take the time to actually do this work — what we know is that when they don’t do that work, those people will continue to be at risk of HIV infection.”

The fourth recommendation centers around increasing understanding and sensitivity of LGBTQ issues among providers.

Recommendation five is to make testing more routine for the overall population ages 15-64.

The final recommendation is standardizing care for HIV testing and treatment to reduce variation from one doctor to another.

The public health bill no one is talking about, but should be