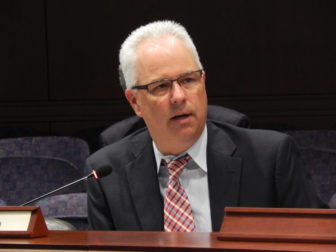 James Wadleigh, the former CEO of Connecticut’s health insurance exchange, Access Health CT, has paid a $5,000 civil fine for accepting employment with a state contractor within one year of leaving his post, the Office of State Ethics said in a settlement released Wednesday.

The Office of State Ethics also imposed a $5,000 penalty on Softheon, Inc., the Stony Brook, New York based business contracted in 2017 to provide Access Health CT with more than $50,000 worth of healthcare information technology services. The company paid the fine for offering Wadleigh a job as its chief operating officer in September after he left the state agency in April.

Wadleigh, who stated he misunderstood the state’s code of ethics “revolving door” provisions, left the position at Softtheon Inc. in October. James Michel, a long-time director at Access Health CT, was appointed to lead the state’s health insurance exchange in September.

“When state employees leave state service it is critical for them to understand that there are very specific revolving door provisions, which ban particular actions,” said Carol Carson, the executive director of the Office of State Ethics. “Know the limits, contact our legal division for advice and then follow the advice you are given.”

According to the Office of State Ethics, Wadleigh participated substantially in the negotiations or award of the state contract with Softheon Inc last year.

In the settlement, Wadleigh states he contacted the Office of State Ethics in February to seek advice on any restrictions applicable to his employment after leaving Access Health.

“[Wadleigh] mistakenly understood that the one-year restriction on his ability to become employed by the Stony Brook business was tied to the anniversary of his signing the contract with the Stony Brook business. He did not realize at the time that the limitations on these facts ran for one year from his departure from AHC,” according to the settlement.