Longtime legislative leaders and fresh-faced newcomers stood elbow to elbow as their took their oaths of office, celebrated with their families, and expressed confidence that they could overcome party and policy differences during the new legislative session.

“We must not stifle the fragile dreams of our young,” said Senate President Pro Tem Martin M. Looney, D-New Haven, who is starting his 39th year in elected office. “We must commit to be a partner of people who are striving to build better lives for themselves and their families. … We must continue to advance enlightened policies.”

“Obviously this is my first time in Hartford but I have met so many wonderful people who are excited and have many of the same priorities that I do,” said Sen. Will Haskell, D-Westport, a 22-year-old newcomer who upset veteran incumbent Toni Boucher of Wilton.

Lawmakers returned to the Capitol Wednesday for a 2019 session that runs through June 5. Democrats were buoyed by widening their margin in the House and regaining a majority in the Senate — which had been deadlocked 18-18 over the past two years. 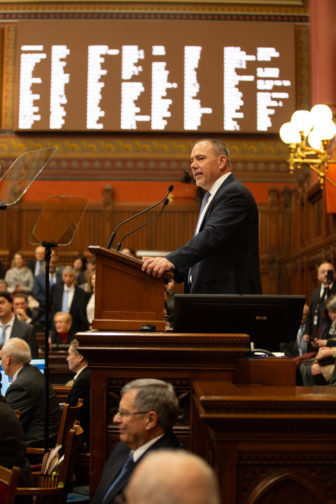 Speaker of the House Joe Aresimowicz addresses his chamber Wednesday.

House Speaker Joe Aresimowicz, D-Berlin, who was elected to this term as speaker, opened with a call for inclusiveness and cooperation.

“We have almost 30 new faces, almost 20 percent of this chamber is brand new with a wealth of new ideas and a lot of new perspectives,” he said. “I look forward to working with all of you. And regardless of how many years you’ve been here, regardless of what political party you came from, your ideas are needed, they are welcome and we want you involved.”

He pledged that Connecticut’s House of Representatives would not become as dysfunctional as Washington.

“Let’s make D.C .look to Connecticut as the example” he said, and in a nod to
Republican House Minority Leader Themis Klarides, added, “I know you’ll lead your caucus with distinction.”

And while Republicans, who had gained seats steadily over the past few state elections, lost ground, Senate Minority Leader Len Fasano of North Haven also opened with an appeal for bipartisanship.

Unlike in the House, where Democrats and Republicans sit separately on opposite side of the room, senators sit in a circle arranged by district, not affiliation.

“We call it The Circle, but it is a family,” Fasano said, adding that “this chamber accomplished so much” while the two parties shared power during the last two-year term.

The list includes two consecutive bipartisan budgets, major new caps on spending and borrowing and other fiscal reforms, tax cuts for the elderly and a major gender pay equity bill.

“The numbers may be a little bit different than they were two years ago,” Fasano added “but the will to get things done still exists.”

Klarides told her colleagues that they would have high and low points, and they should embrace them.

That diversity and inclusion Klarides emphasized — to great applause from the chamber — were a recurring theme during the first hours of opening day, which included the Hartford Gay Men’s Chorus performing the national anthem. 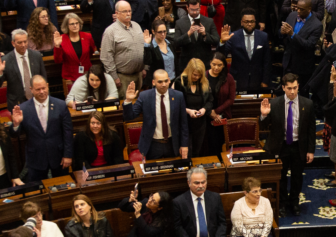 Freshman legislator Raghib Allie-Brenan, D-2nd, in several ways embodies that diversity. He is one of a few openly gay legislators and his father is an immigrant from Guayana. He’s also the youngest member of the House at age 27.

“It’s exciting and I think, you know, if anything I think it’s bigger than me,” Allie-Brennan said. “It sends a message to kids back in the district and kids across the state that you can be young and your voice does still matter,” he said.

“I’m also gay and I think it’s important — I’m also of color — I look different, my name sounds different. All those things kind of add to make sure that you know the next generation knows that they have a place no matter what they look like, who they love.”

Klarides, while congratulating Aresimowicz, noted that partisan debates over complex policies are inevitable from time to time.

She said the two would often “storm” into one another’s office and start a conversation with “I’m not happy” or “we have a problem” or “what did you do?”

But House Democrats and Republicans always could unite, she quipped, by remembering their common foe. “The Senate is always the enemy,” she said.

The senator noted how he begins every session wearing a necktie bearing the seal of the state of Connecticut, a gift given to him in 1993 by then-Senate President Pro Tem John B. Larson, D-East Hartford. 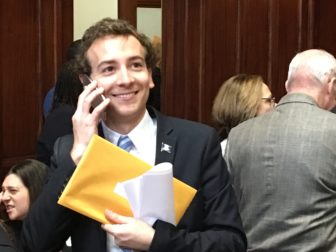 Sen. Will Haskell, D-Westport, awaits the opening of the 2019 session

Pausing for a moment, Looney quicked added, “Putting on the tie this morning I realized that this tie is more than three years older than Sen. Will Haskell.”

“At some point I think I’m going to try to find some sleep,” Haskell said. “I think it’s going to be a busy session but busy’s good. That’s what we were elected for.”

Another freshman senator, Bridgeport Democrat Dennis Bradley, also was undaunted by budget deficit projections for the upcoming fiscal years, saying they should not be an obstacle to achieving a fairer criminal justice system, bolstering re-entry programs, and investing more in education.

“It’s all about resource allocation,” said Bradley, who served on his city’s Board of Education. “With programs that don’t work, we have to be honest and say they don’t work and try new avenues. … making sure we’re paying toward things that actually make sense.” 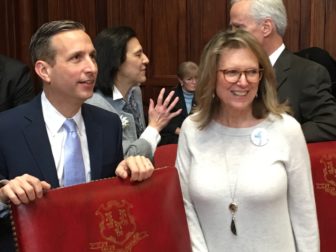 “There are new folks here with a lot of energy and a lot of excitement about making sure that we’re addressing the needs of working families and the middle class in Connecticut,” said freshman Sen. Julie Kushner, D-Danbury, a longtime political and union organizer with the UAW who retired in June. “I have total confidence that we’re going to work hard to move things forward.”

Kushner was one of nine women sworn into the Senate on Wednesday — a total that would have been 11 had Sens. Beth Bye, D-Farmington, and Terry Gerratana, D-New Britain, not opted to accept posts in Gov. Ned Lamont’s administration.

One of the few substantive actions the House took Wednesday was passing a resolution that formed a committee of two Democrats and two Republicans to look into a contested election in the 120th district, where some voters were given the wrong ballot. The committee will be composed of Republicans Vincent Candelora (86th) and Jason Perillo (113th), and Democrats Gregg Haddad (54th) and Michael D’Agostino (91st).

Democrat Philip Young was sworn in Wednesday morning, despite turmoil over the mix up.

Karides urged the committee to find a fair resolution, and said she felt voters “were not given a fair opportunity to vote” and the election was decided by a “handful” of voters.

The day began with Connecticut’s new lieutenant governor, Susan Bysiewicz, taking her oath of office in the Senate, where she also will serve as the chamber’s president.

She and Lamont “are committed to reaching across the aisle, to bringing everyone together,” Bysiewicz said, adding she is excited by the possibilities the new term presents. “We believe in our state and we believe in Connecticut’s future.”

Recalling growing up on her parent’s potato farm in Middletown, Bysiewicz said her family instilled in her the importance for fighting for those in need.

Keeping the message of bipartisanship going, she offered advice from two former governors, one from each major party.

From Democrat Ella T. Grasso, Bysiewicz repeated that “It’s not enough to profess faith in the democratic process. We must do something about it.”

And from Republican M. Jodi Rell, Bysiewicz quoted that “the goal of government is simple, safety and security.”

Clarice Silber Clarice Silber joined The Mirror as General Assignment Reporter in November 2017. She formerly worked for The Associated Press in Phoenix as a legislative and general assignment reporter. In 2016, she conducted extensive interviews and research in Portuguese and Spanish for the Pulitzer Prize-winning investigative team at McClatchy, which was the only U.S. newspaper to gain initial access to the Panama Papers. She is a Rio de Janeiro native and graduated from the University of Maryland’s Philip Merrill College of Journalism.